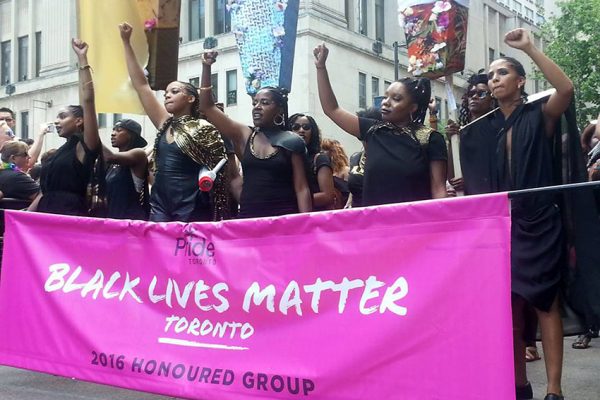 Toronto’s police force has long been known for its sophisticated, expensive PR machine. It is thus not surprising that in the wake of the January 17th community meeting to set policy for Toronto’s Pride 2017, the police version of “Pride policy” was quickly taken up and reproduced in countless media stories, many complete with sad comments from gay or lesbian police officers who (no doubt sincerely) believed they had been exiled from Pride events. The truth was that the meeting voted to exclude police force floats and booths from Pride events.

The Pride organizers have not seemed particularly organized lately, so there is some uncertainty about how things will work out. However, what is indeed true is that Black Lives Matter’s demands, accepted by the majority at the community meeting, did not include banning police officers, queer or otherwise, from participation in Pride events.

First, on-duty police are needed to close streets and regulate traffic, and they will no doubt be treated with respect by Pride organizers, as has always been the case. Off-duty police will be as free to march in the parade as anyone else. Whether they are allowed to wear their uniforms is a matter for police management to decide. (There are very good reasons why officers and soldiers are not generally allowed to wear uniforms and carry guns while off duty).

What Black Lives Matter activists wanted — and what their allies of all races at the Pride meeting agreed to do — was to prevent police forces from using Pride events as PR opportunities.

A bit of background is needed for those not familiar with the history of homophobic violence in Toronto.

As recently as the 1970s, even the most respectable of middle-class white gays and lesbians were fair game for police harassment and/or violence. Due to a great deal of in-your-face activism like that now practiced by Black Lives Matter, certain LGBTQ groups gained respectability in society as a whole and respect amongst the police in particular.

But others, such as sex workers, men who like to cruise for sex in parks, and trans and racialized LGBTQ people, have remained potential targets. Only a few months ago, Toronto police raided an Etobicoke gay male cruising area in the absence of any violence or abuse, and compounded the harm by having a police spokesperson raise the stereotypical spectre of “pedophiles.”

So it’s not as if every LGBTQ person is delighted to see police floats go by on the parade. Many have good reason to feel unnerved, angry and upset.

In our view, police floats and recruiting booths should have been banned from Pride a long time ago, without waiting for BLM to intervene. Floats and booths give the false impression that the police are friends and allies. They sweep under the rug not only past atrocities but present continuing violence and discrimination against disfavoured LGBTQ subgroups (including queers of colour, who are made invisible when media reports pit one segment of the movement against another).

The community meeting about Pride was not an attack on individual gay or lesbian police officers, as many have clearly been led to believe. All are welcome at Pride, as always. But if LGBTQ leaders and community members conclude they are not willing to let the police use the main annual festival as an advertorial for a police force that has serious PR problems because too many officers continue to abuse the unique powers our society has granted them, then they deserve our congratulations.

We do recognize that change has certainly taken place. We are glad that it is possible now to be an openly gay, lesbian, or trans police officer. But as long as racial profiling continues to exist, progressive organizations of all sorts should beware of having their festivals co-opted and used as a public relations exercise in a way that fosters divisions between marginalized communities.

Mariana Valverde is a professor at the University of Toronto who in the 1980s helped to organize many LGBTQ events and protests, including early versions of Pride Day. Follow her at @mvalverdeurban

Akwasi Owusu-Bempah is an Assistant Professor at the University of Toronto. His work focuses mainly in the areas of race and justice. Follow him at @AOBempah