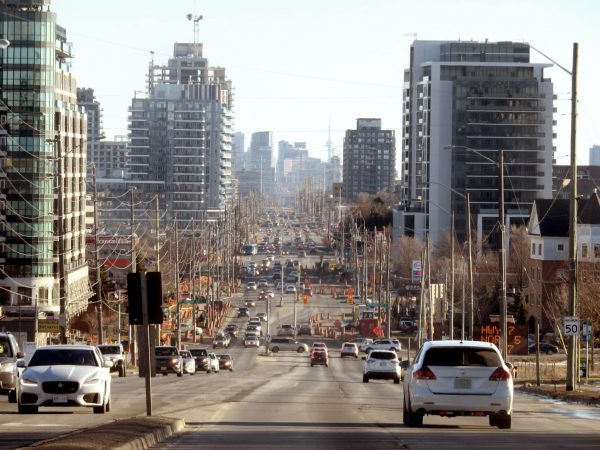 In the bonfire of the vanities that is transit politics in Greater Toronto, it is often difficult to identify who is the biggest bozo.

Take, for example, the letter circulated to the media yesterday morning, some time after Mayor John Tory’s stump stunt at the Pape subway station and some time before Liberal transportation minister Steven Del Duca’s tart riposte (delivered, on this occasion, without a star turn at City Hall).

The mayor’s missive, on letterhead, was addressed to TTC CEO Andy Byford, and wondered whether there were “short term” and “creative” solutions for relieving congestion and crowding on the subway line.

My, my. What a helpful suggestion!

I’ll bet a shiny new Presto card that Byford never thought of finding “short term creative solutions,” but now, as he’s been duly put on notice to pull up his socks, Toronto commuters can rest – and travel – easy, knowing that everyone’s finally on task.

Meanwhile, council for reasons that surpass understanding voted to endorse an omnibus motion of sorts – a report that moves Relief Line planning ahead by a few centimetres (good) while requesting, ever so tentatively, that City staff begin planning the Yonge North subway extension (not good).

The report, which passed council, proposes that this new subway extension up to Richmond Hill should be owned by the TTC, although truth be told we really have no idea who or what will ultimately operate this thing.

What’s strange to me is why Toronto council should even consider playing along with a fantasy transit scheme that has kicked around York Region since forever. Indeed, as recently as last summer, and a set of consultations on a “coordinated” transit planning in Toronto, Yonge North warranted nary a mention. Scarcely nine months later, it deserves the full moral heft of a council-endorsed staff report.

Don’t get me wrong. I understand the political machinations. Tory did a whip-saw number earlier in the month, making common cause with his York counterparts so they can present a united front to Queen’s Park in the pre-election scramble for Liberal munificence.

But any idiot can see that from a “coordinated” transit planning perspective, the Yonge North line is an absolutely ruinous idea, and all the more so if the TTC is compelled to run the thing. Flash forward a couple of decades, and we’ll have thousands of southbound commuters being pumped into the Vaughan Metro Centre station, at the west side of York Region, and thousands more south-bound commuters being pumped into the Richmond Hill station, in central York.

It surely it doesn’t take an engineering degree to understand what happens next. No one inside the city limits will ever get a seat again on the morning trip, and that point where you have to let several trains pass before there’s space to get on will migrate northwards, towards York Mills or even Sheppard, thus ensuring that almost all Toronto users of the system, who pay both fares and the TTC’s subsidy via their property taxes, will be permanently pissed off.

What’s more, in the grand lottery that is provincial funding, I think it is safe to predict that the financing and construction or the Yonge North will begin well before the Relief Line, despite all the insistent bleeting at council about prioritization. Willowdale councillor John Filion successfully moved a motion that council won’t consider the Yonge North line until the Relief Line is fully funded.

Really? The latter is an immensely complicated undertaking, and invariably finds itself competing for resources, expertise, and political love against a straight-shot tunnel that runs up a wide arterial right-of-way in the 905. And hey, if the province and York Region want to start building it from the north end southwards, is there any way the City can stop them?

The staff report approved yesterday by council also made no mention of RER, Metrolinx’s ambitious and entirely rational $13.5 billion strategy to move the GO Train network to two-way/all day service with some corridors running trains at 15 minute head times.

Metrolinx is actually building out this extensive project, right now; once finished, it will come complete with tens of thousands of new parking spaces, shiny new stations, and, eventually, electric trains.

What’s more, there are no conditions I can envision that would allow the Yonge North line to be completed before Metrolinx substantially finishes its RER work (Metrolinx’s back of the napkin estimate is 2031). In other words, Yorkers — who enjoy access to three GO rail corridors and 16 stations — will have gradually seen their in-bound commute improve long before they’re presented with the far less appealing option of jamming themselves into a subway that will crawl along a 36-km local on its tortuous journey downtown.

Can you see any reason, besides politics, for council to engage? I can’t.

On top of all this positioning – which, let’s face it, is about who gets to grab the largest bag of gold during one of those election-year infrastructure funding lotteries that produce such dubious outcomes – the province and the feds have concocted one more elaborate transportation scheme that would require billions of dollars in investment in the hopes that ridership will someday materialize.

I am referring to the meticulously curated policy package that seems to consist of these elements: the high-speed rail (HSR) corridor between Toronto and London; the fed’s $950 million “supercluster” funding program announced yesterday; Ottawa’s newly proposed “infrastructure bank,” and the various Liberal-friendly interests pushing to transform Pearson into a multi-modal (and therefore eminently privatizable) transportation mega-hub that will include not just the airport, but a terminus for the Eglinton West LRT, and, in all likelihood, some kind of station-connection to the HSR line, the basic details of which were released last week by former federal Liberal transportation minister David Collenette. (See Spacing contributor Sean Marshall’s take on the HSR plans.)

Waterloo’s tech sector has been lobbying furiously for better rail connections to Toronto for a few years and Ottawa’s supercluster plan is almost certain to provide cash for something that knits together the artificial intelligence network that’s spun off from the University of Toronto, Waterloo’s tech cluster, and the train.

This all may sound intriguing and forward-looking, until you stop to consider that these BIG IDEAS, advanced by governments that seem to have a lot of difficulty staying focused, represent yet another source of fiscal competition for the TTC’s desperately over-extended rapid transit lines, not to mention all the other unfunded infrastructure priorities (e.g., Portland berm, the waterfront LRT, etc.)

It’s as if Toronto council, the provincial government, and the feds are all sharing a house where the basement is rapidly flooding due to a giant crack in the foundation. Yet instead of agreeing to fix the problem, these roomies have decided instead to hang pictures and buy new appliances in order to distract themselves, however fleetingly, from the disaster building down below.