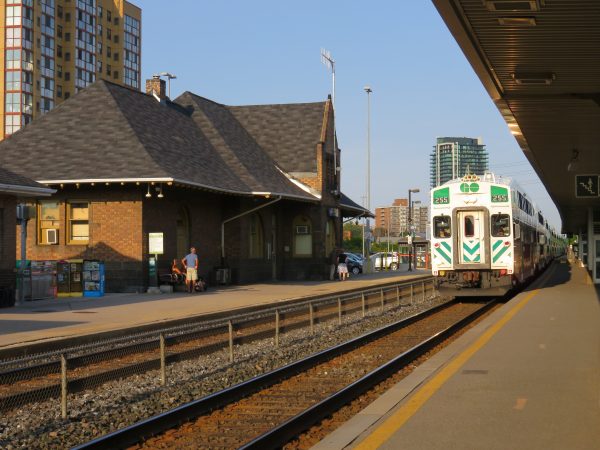 Last week, Premier Kathleen Wynne announced the commencement of an Environmental Assessment for a new high-speed rail line to Southwestern Ontario. Phase I would connect Toronto’s Union Station and Pearson Airport with Guelph, Kitchener, and London; Phase II would continue to Windsor, with a potential stop in Chatham.

Former federal Transport Minister David Collenette was assigned to study the high-speed corridor; his report is now public on the Ministry of Transportation’s website. The recommended plan proposes a train service that could operate at speeds up to 250 km/h, making it a true high speed line (though slower than many lines in Europe and East Asia, which have cruising speeds between 270 and 320 km/h). The estimated cost of the project $21 billion, in return for reducing travel times from Toronto to Windsor to a mere two hours.

During his time as Transport Minister under Prime Minister Jean Chretien, Collenette backed incremental VIA Rail improvements, as well as VIA-FAST, a higher-speed train service between Toronto, Ottawa, and Montreal. Those proposed improvements were cancelled when Paul Martin became prime minister. Currently, VIA is pushing for a revised version of that previous plan. Collenette also pushed hard for a rail link between Toronto Pearson International Airport and Union Station, a fundamentally flawed proposal known as “Blue 22.” That airport rail link proposal was later relaunched as a provincial project and opened as UP Express in 2015.

An option for a 300 km/h HSR service was  also studied, but found to be even more expensive, requiring more dedicated tracks. The recommended 250 km/h option will allow the service to use much of the existing Toronto-London and London-Windsor corridors.

For southwestern Ontario, high speed rail could be a boon. Kitchener-Waterloo is a major educational and technological hub. Faster and more frequent rail service will benefit university students, tech workers, and other commuters, perhaps including those priced out of the Toronto housing market. London’s economy has taken some hits in recent years, so bringing it within commuting distance to Toronto and K-W gives residents there more options.

Between Toronto and Kitchener, the report assumes two off-peak HSR trains an hour, and one GO train every hour, making local stops. It also assumes that GO RER service will continue to terminate at Bramalea, a poor location to terminate regional rail services, as downtown Brampton is one stop away. Building the new freight bypass route, described below, will allow many more passenger trains to pass through Downtown Brampton, including GO RER trains. It would be a shame if the HSR plans pushed aside regional and local needs.

Stratford and St. Marys, which are only served by VIA trains (and have no intercity coach service), will also have to be considered, as they will be bypassed by HSR. As well, towns and cities elsewhere in southwest Ontario, such as Simcoe, Tillsonburg, Wallaceburg, and St. Thomas, have no bus or rail access. For less than the $15 million pledged for the HSR EA, the province could fund several years’ worth of basic intercity bus service to connect these communities together.

Unless these assumptions change, Brampton residents will see twice as many trains speed by their downtown core than stop, and other smaller communities might see their rail service disappear.

In Canada, we have an abysmal record of proposing high-speed rail projects, but never following through. Even VIA’s less ambitious plan for dedicated tracks and new equipment to provide more frequent and reliable service, with somewhat faster travel times, is not yet secure.

There is already a Toronto-Kitchener-London service: two VIA trains operate daily in each direction along the entire route, while GO Transit operates more frequent weekday trains to Brampton and four weekday round trips to Kitchener. Before the 1990 Brian Mulroney-era VIA cuts, there were five round trips on this line. In the 1980s, the fastest VIA train between Toronto, Kitchener, and London took 3 hours, 2 minutes; today, the fastest train is 3 hours, 22 minutes.

A simpler plan would address many of the same issues the high-speed rail proposal seeks to solve. It can be done incrementally, reducing upfront costs. As an additional bonus, it would serve many more ridings, especially those suburban constituencies that the Liberals will seek to hold onto in next year’s election.

Some of these improvements can be started within the next year, before the 2018 provincial election. If the province wants to show that it’s serious about providing effective rail service to Kitchener and London, there’s no need for another high-speed rail study. Simply continue the work on the “Missing Link,” plan for GO RER to continue west of Bramalea GO, improve the existing rail infrastructure, and acquire the optimal fleet for medium-distance rail services. Once that is complete, planning for even higher speeds, possibly with a new purpose-built alignment, should begin.

Canadians have been teased with high-speed rail proposals that never get anywhere (best mocked by Rick Mercer’s infamous parody), meanwhile existing rail infrastructure is neglected and intercity services are cut. While the provincial government studies the feasibility of a high-speed rail project, it’s prudent to move forward with a sensible plan that can start right now.

An earlier version of this article appeared on the author’s personal blog.