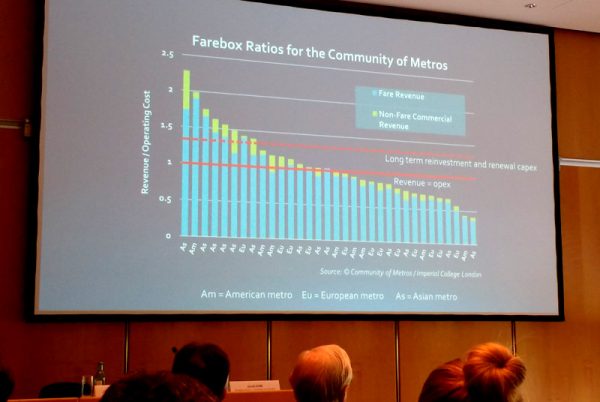 I attended the International Transport Forum May 31-June 2 on behalf of Spacing, and over the next few days will report some of the most interesting things I heard there.

“Many governments embark on metros [subway systems] as if they culminate with the opening” said the World Bank’s Dominic Patella as he introduced a session on “What drives successful metro systems” at the International Transport Forum in Leipzig, Germany last week. Too often governments think of the goal of metro projects as building a piece of infrastructure, whereas the real goal is to improve the lives of the city’s inhabitants. That’s where the role of the operator – the agency that actually runs the subway system – is key, but often overlooked.

The session sought to help rectify this neglect by “telling the operator’s story” – digging into what makes metro system operators more or less effective. It was based on a study of 10 metro systems around the world (PDF), including Toronto’s. Its primary goal is to make sure that cities in developing nations embarking on completely new metro systems start off on the right foot, but the issues are familiar for established systems such as the TTC, too.

The overarching fact of life for operators is that the environment they have to work in is always turbulent – governments and their priorities change, the economy goes up and down, weather varies, infrastructure fails unexpectedly. We can recognize that difficult environment in Toronto’s experience, but it’s useful to realize it’s true of all systems, in any city.

The overall theme of the conference was governance, and a key relationship for any operator is with its authority – the political masters who own and direct the system. As panelist Richard Anderson, of London’s Imperial College, said, “A metro’s success is never solely under the control of the operator.” Jacob Kam, from the Hong Kong metro system, added that the authority’s role is to create an environment in which the operator can thrive. Too often, however, authorities seek to retain key decision-making powers and micromanage their operators, effectively preventing them from doing their job.

A successful environment includes stable and sustainable financing. First, emphasized Anderson, fares need to provide a strong and consistent proportion of the agency’s funding. Often, politicians will promise fare freezes, which in the long term reduce the amount of funding controlled by the operator and increase its dependence on subsidies, undermining the operator’s autonomy. In the end, as subsidies themselves get cut back, the agency cannot reinvest in basic maintenance, which can create a “death spiral” of declining service leading to declining ridership, leading to declining revenues, triggering even worse service, and so on. It’s what happens when authorities focus on building and ignore maintenance. In order to simply sustain its normal level of service, added Anderson, on top of its operating costs an operator should be reinvesting an additional 35% on top of those operating costs in infrastructure maintenance and renewal (in the case of a new system, it should be socking that amount aside for future investment). The ideal situation is when the operator can set its own fare increases without external approval (they will still be constrained by the need to maintain ridership).

But fares will rarely cover all of an agency’s costs. Hong Kong’s Kam noted that, to be truly autonomous, an operator needs an additional dedicated, independent source of revenue. This cannot be based on additional transit-related non-fare revenue (e.g. advertising) – such revenue is helpful but never significant. It needs to be an external source. In Hong Kong, it is based on the agency’s extensive property ownership, but in other cities it could be a congestion charge, a dedicated sales or income tax, or other mechanism. Only with such a source can the agency have the independence to make its own choices for reinvestment and improvements.

The other key role of an authority is to keep a steady pipeline of new projects for expanding the service, in consultation with the operator. Too often, operators are put through dry periods, where there is no expansion, and flush periods where there is too much expansion. In the dry periods, the agency loses the capacity to manage new projects, and then in the flush periods, the agency is overwhelmed and unable to cope with, manage effectively, or integrate properly all of the new initiatives at once. Ideally, the agency itself will have borrowing power and can to some extent select and fund its own expansion projects at a manageable pace.

As well as not neglecting maintenance after the system is built, another key to operator success is how the system is conceived before the building begins – the initial design of the system and its integration into the city’s overall transportation network. Tony Ridley, also from Imperial College, noted that many projects have already failed when the detailed design starts, because the first phase of conceptualizing the project was not approached with enough seriousness. In this context, Toronto’s TTC was cited as a “gleaming example of bus-rail integration,” where from the beginning the bus (and streetcar) network was oriented around and fed into the subway network seamlessly on a single fare. The value of such integration was illustrated by the example of Santiago, Chile, which reorganized its bus system around the metro and saw the ridership of its metro increase dramatically.

By contrast, a poor initial design can leave a metro underused in the long term. One example is designing for too low a capacity, which saves money in the short term but limits ridership potential and costs a lot more to rectify in the long term. By contrast, for example, Sao Paulo’s system was designed from the start for high capacity with multiple tracks for fast loading/unloading at stations, which also enables train turnarounds at every station. Even for a successful system, a poorly chosen new line can undermine the operator’s effectiveness by drawing down its resources in order to keep operating a line that does not come close to paying for itself. Barcelona was used as an example of this kind of problem, but it certainly has resonance in Toronto.

Listening to the panel was a useful reminder that the TTC’s issues are often shared with many other systems around the world, and that it’s good to occasionally take a step back and look at its problems and potential solutions from a wider perspective.