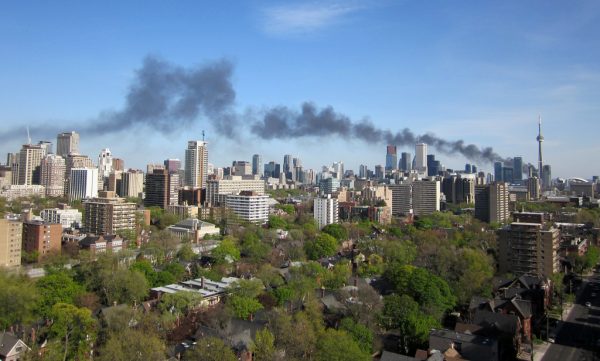 Joe Cressy, Trinity-Spadina councillor and a member of the Toronto Community Housing board, on Tuesday provided Spacing with fire fatality statistics for the housing agency as well as the city generally. Between 2012 and 2016, 69 people died in fires across Toronto (pop. 2.88 million). Ten of those were in TCHC buildings, which collectively house 110,000 people. In other words, the risk of dying in a fire for a TCHC resident is four-and-a-half times higher than for a Toronto resident living outside public housing.

“There is clearly a disproportionate number of fatalities within TCHC,” Cressy said. “While TCHC certainly houses a complex and vulnerable population, these numbers demonstrate the very real need for enhanced fire safety.”

The data emerges at a time when TCHC is trying to get a handle on its fire safety protocols in the aftermath of Grenfell, and in response to widespread anxiety among tenants. At a board meeting last week, board chair Bud Purves revealed that former Ontario Fire Marshal Ted Wieclawek made a presentation during the in camera session about his review of TCHC’s fire safety program, protocols and practices. Wieclawek will “assist the Board in ensuring that [TCH] meets or exceeds fire safety standards across all our buildings,” Purves said. “In this capacity he will have direct access to me as Board Chair, independent of management.”

Cressy told Spacing that a report on this project will likely be made public next week.

Just two weeks after Toronto Community Housing (TCHC) agreed to a $100,000 fine in the deaths of four seniors trapped in a fire in one of the agency’s apartment complexes on Neilson Road, another elderly tenant has died in a blaze that occurred early on Tuesday morning, the Toronto Sun reported.

As Spacing has documented in its series on fire safety in apartment buildings, TCHC tenants, especially those living in older complexes, are afraid of what might happen if, or when, the flames come to their homes.

“Something must be done,” said Connie Harrison, 62, who lives in a TCHC senior’s building on Victoria Park with a large number of tenants with mobility or cognitive disorders. “One of the issues is [that] a lot of seniors should be in nursing homes but are in wait mode, so TCHC becomes the defacto nursing home.”

What’s not clear is whether the agency has a clear picture of the fire safety conditions across its portfolio of 350 properties, as well as a prioritized strategy to either remediate those buildings with the most precarious maintenance shortfalls or tackle the issues associated with tenants who have hoarding or cognitive disorders that exacerbate fire risk.

It’s certainly possible, but TCHC has declined to publicly disclose its fire fatality/injury track record or its fire safety status — even in aggregated form — as a means of providing tenants, managers, members of council and residents with critical information about this huge operation. Want to see how your building fared in its latest fire safety inspection? You have to go through an access to information request.

On Tuesday, before the latest fire, Spacing submitted the following question to the agency: “Does TCHC have any plans to produce public aggregated/porfolio-wide reporting/disclosure on fire incidents, injuries and fatalities, as well as state-of-good-repair allocations geared specifically at remediating fire safety hazards identified by Toronto Fire Service inspections?”

In other words, does the agency intend to provide residents and decision-makers with a clear annual report card so they/we can determine whether TCHC — which is to say the City of Toronto — is becoming a safer or more dangerous landlord in terms of fire prevention?

A TCHC spokesperson replied that the agency has nothing to add to a statement it provided last week, and reported here. Bottom line: we won’t know because TCHC has no plans to improve its transparency and reporting on issues of fire safety and fire mortality in its buildings.

We also asked Mayor John Tory the same question. According to Don Peat, his spokesperson, the mayor “will be speaking to TCHC officials and board members in the coming days to find out whether it would be possible for this information to be made public in the future as part of its annual operations disclosure.”

Why does this sort of reporting matter? Simple: if everyone can see the year-over-year trajectory of metrics such as deaths, frequency of fires, causes, fire-related state-of-good-repair investment expenses, and so on, then TCHC’s management and board would have little choice but to take steps to make improvements.

Sunshine matters and rarely more so than in agencies tasked with serving highly vulnerable populations. But as has become increasingly clear, TCHC doesn’t really have a handle on its exposure or a comprehensive plan to address same. After all, if it did, the release of this information wouldn’t be such a problem.

“We’re vulnerable in that we don’t have the knowledge,” says John Plumadore, who is president of the Brentwood Towers Tenants Association and a member of the executive of the Federation of Metro Tenants Associations. “What could be more important than transparency in a democratic society?”

The lives of its frailest and most vulnerable tenants seem to be hanging in the balance.

In the wake of the Grenfell disaster in London, the Metro Tenants Federation stepped up its own advocacy by updating and simplifying its fire safety guide for tenants, which is available here. TCHC’s tenant’s guide, which includes fire safety, is here, and the City of Toronto’s high-rise fire safety information is here.