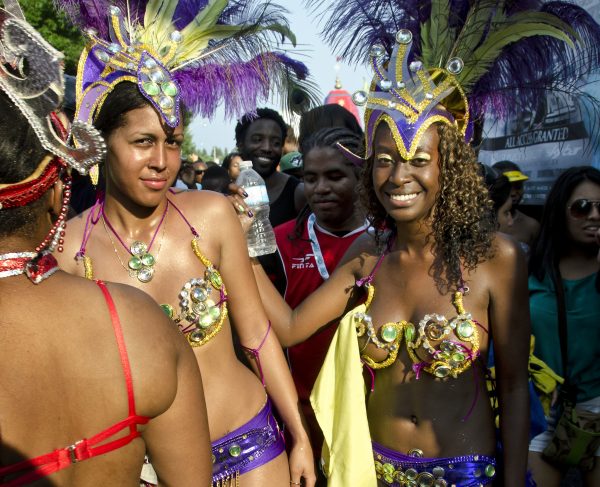 Fifty years later, Caribana is an annual fixture in Toronto, bringing in an estimated 1.2 million people and an economic impact of over $300 million. The first Caribana was organized by members of the Caribbean community, many of whom were recent immigrants who came together to form the Caribbean Cultural Committee (CCC) to bring carnival to the city. The aim of Caribana was to celebrate Canada’s bicentennial year, and in the spirit of Expo ’67 in Montreal to be a public display of the Caribbean community’s contributions to our cultural diversity.

Some parade goers – “revelers,” “masqueraders,” and onlookers – might not know the history of carnival and why Caribbean people take to the streets in this way.

Caribana events begin in July, culminating with the parade over the long weekend in August. This date, however, is significant. Known as “Emancipation Day,” August 1, 1834, marked the day when slaves across the British colonies were granted their freedom. Under the Abolition Act, however, in sites like Jamaica, former slaves entered into apprenticeships that essentially continued the system of plantation labour for decades after emancipation.

In Ontario, the first Monday in August was once called “Simcoe Day” in honour of John Graves Simcoe, the first Lieutenant-Governor of Upper Canada. Simcoe is also credited with signing “An Act to Prevent the Further Introduction of Slaves, and to Limit the Terms of Contracts for Servitude Within This Province” (1793). While similar to the British Abolition Act, Simcoe’s Act did not “free” all slaves in Canada. It was a gradual abolition bill that provided that any slave entering Upper Canada was considered free. Existing slaveholder property rights were still protected.

Thus, the Caribbean carnival, from which Caribana grew, was born in slavery and out of emancipation. The cacophony of sounds that ring out as revelers “play mas” to the melodic rhythms of soca, calypso, and the steelpan or steel drum (an instrument that emerged from Caribbean plantation slavery) can only be described as the ordered chaos of freedom and resistance.

In Trinidad & Tobago, carnival (in February) can be traced back to the 18th century when French planters staged masquerade balls at Christmas time. But carnival also goes back to the 17th century, when enslaved Africans began masking traditions, where they would hold festivals around harvesting of the sugar cane.

Today, carnival Monday begins with “J’ouvert” (French for “day opens”), in which revelers take to the streets, dancing from night to dawn dressed in costume, body paint, and disguise. Beginning in the 17th century, annual “crop-over” (each June) events in Barbados started on the day on which the last of the sugar canes were cut on sugar plantations. These dances were organized by, and held within, slave-owners’ plantations.

Yet some were convened by enslaved blacks themselves, with or without the permission of slave owners. In Jamaica, “Jonkanoo,” an African-based ritual dating back centuries witnessed members of the enslaved community dress in elaborate costumes and dance in the streets around Christmas. Like in Barbados, Jonkanoo – also known as “John Canoe” – was often discouraged by British elites in Jamaica.

The Russian philosopher and critic Mikhail Bakhtin’s idea of “carnivalesque” allows us to think about carnival not only as a liberating moment – for a short period the state has little or no control over the lives of revelers – but also a kind of licensed transgression. Carnival became a public display of self-expression and simultaneously an act of defiance. To reclaim space with dance, music, costumes and masks is not just about “jumping up”; it is (was) an expression of black liberation. The carnival allows for the liberation promise to be fulfilled, however brief that may be.

Toronto’s Caribana is not the only carnival of its kind outside the Caribbean. In Brixton, south London, carnival takes place in July. The West Indian American Day Carnival in Brooklyn, New York is held over Labour Day weekend. And Miami’s carnival is in October. Like Caribana, these events are rooted in the carnival traditions of Trinidad, Barbados, Jamaica and other Caribbean islands.

Over the decades, the Caribana parade has been marred by violence, and each year onlookers and revelers alike complain about the high fencing, shortened parade routes, and long gaps between the mas bands and floats. Despite this, every August Toronto becomes the Caribbean, giving people the chance to take to the streets, and live out the carnival’s capacity for ordered chaos.