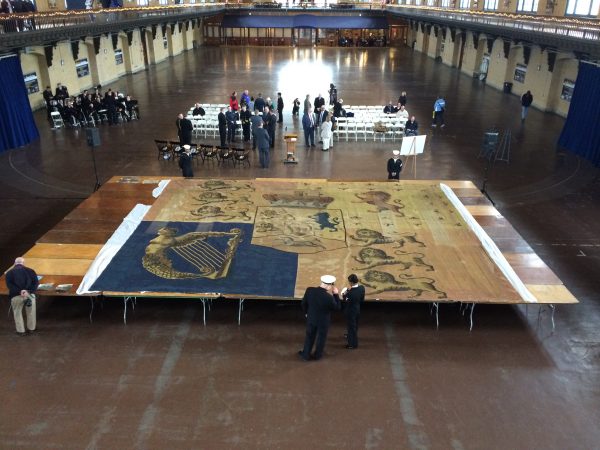 EDITOR’S NOTE: Fort York’s most tenacious and devoted champion, Stephen A. Otto, died earlier this week after a long illness. Spacing‘s readers will know that he was a great friend of the magazine, as well as an indefatigable advocate for heritage conservation and public space. A memorial service will be held in his honour SATURDAY, at 11 a.m., at Trinity College Chapel. On this, the 205th anniversary of the Battle of York, Spacing would like to dedicate this column to Steve’s memory.

On Saturday April 7, 2018, I found myself in Dehlgren Hall, at the United States Naval Academy in Annapolis, Maryland, staring at the British Royal Standard of 1801-1816, which was captured by American forces during the occupation of York, Upper Canada (now Toronto, Ontario), on April 27, 1813.

I never expected to be standing in this place, looking at a trophy of war taken from my hometown 205 years ago. For all its historic intent, my visit was very much the result of that quintessentially 21st century technology known as Twitter.

Last December, a tweet by Claude Berube, the museum’s director, contained an image I recognized immediately. The British Royal Standard was being removed from exhibit as the first step in the long process of conserving the Trophy Flags of the United States Navy. The collection contains about 173 flags, ensigns, banners and pennants that were transferred to the Academy in 1913. According to the New York Times (June 1, 1913), they were to be placed on permanent display in a series of alcoves of the Academy’s new auditorium. Now, the museum’s preservation team were removing the Royal Standard from its case for the first time in 105 years.

After a few brief emails with Berube, I put the Standard out of my mind until I received an email from him asking, “What are you doing April 7 and can you be in Annapolis?” 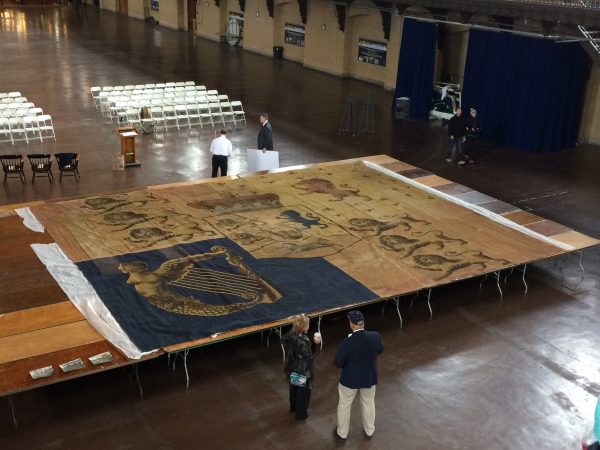 The first thing that struck me when I finally saw the flag was the its size. The Standard is very big — about 25 feet (7.6 m horizontal) on the “hoist edge” — the side that goes against the flag pole — and 35 feet (10.6 m wide) on the “fly edge” — the bit that flaps in the breeze. It required 60 eight-foot-wide folding tables to lay it out.

The Standard’s size raises the obvious questions: Did it actually fly from a flag pole, and where would that pole have been?

The answer to the first is, yes, this flag was meant to be flown. It was a regal symbol that showed that the sovereign, or her official representative, was in residence.

Where the pole itself was located is another matter. Most likely, it would have been near Government House, the official residence of the Lieutenant-Governor of Upper Canada. Constructed in 1800 in the middle of what is now the parade ground at Fort York National Historic Site, the building stood until the American attack of 1813.

Unfortunately, its proximity to the main gunpowder magazine meant Government House was heavily damaged when the 30,000 pounds of black powder ignited by the retreating British forces exploded. The building was further sacked by the Americans when they withdrew from York a few days later, and finally cleared away entirely to allow for the construction of the fort that stands today. Only buried archaeological features remain. 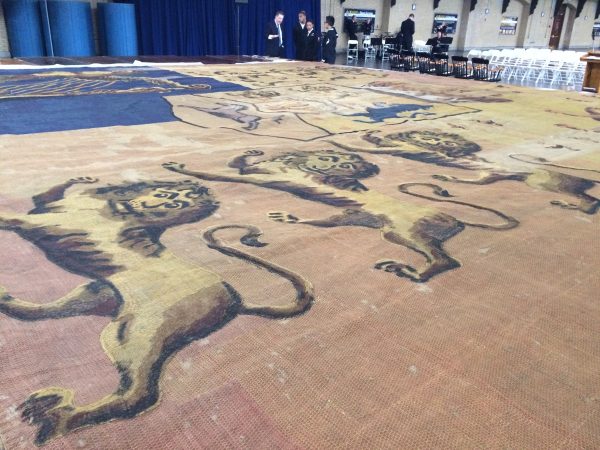 There’s no doubt that the Standard was present on that fateful late-April day, but was it flying when the Americans attacked? Like so many details about the past, the available information is fragmentary and contradictory. The short answer is: I don’t think so. The Lieutenant-Governor was in England for the duration of the War of 1812. It is unlikely that the revolving door of military officers who presided over the Upper Canadian parliament would have flown it.

At the time of the battle, the incumbent, Sir Roger Sheaffe, had only been in the job for about four months; the previous office holder, Sir Isaac Brock, had managed to get himself killed at the Battle of Queenston Heights. Sheaffe had larger problems to worry about than flag-flying protocol, namely defending the province from imminent American attack.

Here’s where history meets science. Naval Academy Associate Professor Joseph Lomax and Midshipman First Class Carly Knapp analyzed the dust recovered during the flag’s cleaning and found huge spikes indicating the presence of lead and sulphur, both substances unrelated to the dyes used to colour the cloth. These are suspected to be chemical traces of the explosion of the gunpowder magazine. In addition to the tons of sulphur-rich black powder, about 9,800 pounds (4,445 kg) of lead balls were stored in the magazine. This new chemical trace analysis demonstrates that the flag was probably stored at Government House at the time of the attack. It’s precise location on that date had been an open historical question, until now. 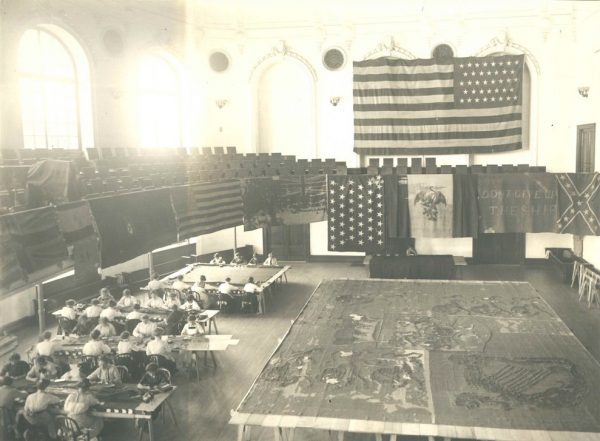 For a 218-year-old piece of cloth, the flag is in good condition. Since it is made of dyed cotton, the Standard survived better than if it had been woven from silk. In 1913, a team of seamstresses led by Amanda Fowler hand stitched the flag’s remains to a backing in preparation for its display. She was so proud of her ‘original method’ that she signed and dated the heavy Irish linen backing. Fowler would go on to use her methods to preserve the Star Spangled Banner, the American flag that flew over Fort McHenry during the British bombardment in 1814.

During the ceremony on April 7, American, British, and Canadian naval officers offered formal remarks touching on the history and significance of the flag. But one of the most moving moments came when I noticed the guard of honour, four midshipmen and sailors, rotated every hour to ceremonially watch over this precious object while over a thousand visitors viewed it. When the event ended, five young midshipmen in full uniform volunteered to help roll and carry the Standard back to the museum’s storage. They did so with such a sense of dignity and purpose that their careful actions have stayed with me ever since.

Claude Berube had a challenge coin, made from deck timber taken from the USS Constitution and laser etched, commissioned to commemorate the event. On the reverse side, it is inscribed with this phrase: “MET IN HISTORIC COMBAT, JOINED IN ENDURING PEACE.” Those words honour the more than 200 years of peace that have passed since the British Royal Standard became a trophy of war.

images courtesy of the US Naval Academy Museum

Richard Gerrard is an historian/archaeologist and curator with the City of Toronto’s Heritage Services division. Follow him on twitter at @richardhgerrard.