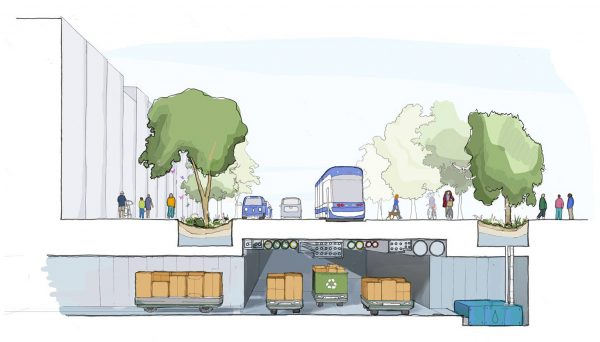 Within the next week or so, Sidewalk Labs will sign contracts with two as-yet unnamed engineering firms tasked with figuring out one of the central goals of Waterfront Toronto’s plans for Quayside and the Portlands: a net-zero development strategy built from a tightly linked confection of ultra-efficient architecture, renewable power, and a highly experimental approach to district energy.

Much of the public and media attention on SWL’s plans for Quayside has focused so far on the proposed deployment of public realm sensors and the leveraging of data in the design of urban infrastructure. What’s less well known is that the project’s ambitious energy mandate received top billing in Waterfront Toronto’s spring 2017 request for proposals for Quayside. That aspect of the plan, in fact, represents the outcome of years of detailed policy and planning by the agency and the City of Toronto, which last fall issued a report entitled, “Port Lands Energy Plan: Guidelines for a Net Zero District.”

According to WT officials, the two contracts – at least one of which is going to a Canadian firm – will be financed out of the US$50 million pot of funding SWL has pledged to spend on developing the master development and innovation plan for Quayside, the release of which has been delayed until the end of 2018. WT spokesperson Carol Webb says Sidewalk didn’t issue an RFP for the consultants it will be retaining.

According to WT’s innovation and sustainability manager Aaron Barter, the consultants will be scrutinizing the technical requirements of a next-gen district energy concept known as “ambient loop.”

Conventional district heating and cooling utilities, such as Brookfield Infrastructure subsidiary Enwave, pump either natural gas-produced steam or lake water through a distributed network of pipes tied to the heating and air conditioning systems of individual buildings. While the model provides environmental benefits, it is far from carbon neutral, with the network effectiveness heavily determined by the energy efficiency of the individual buildings.

An ambient loop system, by contrast, is designed to gather and then circulate surplus heating or cooling generated by individual structures or other types of infrastructure within a district. With this approach, a closed network of pipes, chillers and heat pumps links the buildings, and is designed to manage energy flows not unlike the smart grids and meters that accommodate distributed renewable electricity. “It means we’re not burning natural gas,” Barter says.

Unlike smart electricity grids, Barter and SWL officials both admit there are, to date, no large-scale operating ambient loop systems. A few limited projects exist — one in Vancouver in a Olympic Village development on False Creek that recycles waste heat produced by a sewage pumping plant, and another at Stanford University. The City of Edmonton, in turn, is in the process of re-developing Blatchford, the site of a decommissioned civic airport, using a “district energy sharing system.” Says Barter: “There is no clear example of what we’re trying to do here.”

The heating/cooling infrastructure, however, is only part of the equation. The other critical element is the presence of what Rit Aggarwala, SWL’s head of urban systems, describes as “super efficient” buildings designed to capture and then recycle as much surplus heat and cooling as possible. In other words, an ambient loop system for Quayside or the Portlands will only deliver on the net zero vision by tethering an untested energy infrastructure system to highly prescriptive design standards that almost certainly exceed what’s widely in use in Toronto right now.

Barter points out that the City’s ambitious new green building code, which came into effect on May 1, represents the minimum for developers who want to build on Quayside or the Port Lands (although the actual energy efficiency requirements for these areas will likely go well beyond those regulatory benchmarks). Sidewalk officials confirmed they have been meeting privately with local developers, and presumably this topic is an important item on the agenda.

What’s far less clear, as both Aggarwala and Barter admit, is the business model that eventually supports this complex chicken-and-egg approach (there are, so far, no business models for any of the other elements of Sidewalk’s plans for Quayside). Aggarwal says the overall cost will be driven up by not just the demanding design standards for individual buildings, but also the challenge of constructing the ambient loop infrastructure in a high water-table precinct built on heavily contaminated landfill. “At Quayside, it’s a bit more complex than inland where there’s no fill,” he adds.

Nor is it apparent, at this point, whether the ambient loop will operate as a stand-alone utility, like Enwave, or how the energy-sharing infrastructure will be supplemented by more conventional renewable systems deployed by individual building owners (geothermal, biomass, solar). (Barter also declined to say whether either precinct would be served by a natural gas distribution network.)

Sidewalk officials confirm they’ve spoken to Enwave, but an Enwave spokesperson declined to elaborate on the nature of the discussions. WT in the past has bruited the possibility of extending Enwave’s deep lake chilling infrastructure into the agency’s development zones, and last month completed a deal to supply energy to a 25-storey East Bayfront LEED Platinum project by Menkes that just broke ground. WT spokesperson Carol Webb adds that the agency is also talking to Toronto Hydro as a potential partner.

Aggarwala says it’s likely that such an innovation-driven system will only become viable commercially through economies of scale. The deployment of an ambient loop within Quayside, however, would ultimately serve as a proof-of-concept for a larger roll out in the Port Lands and elsewhere. But, as he adds, “I couldn’t tell you if this works at 25 buildings or if it takes 200 buildings.”