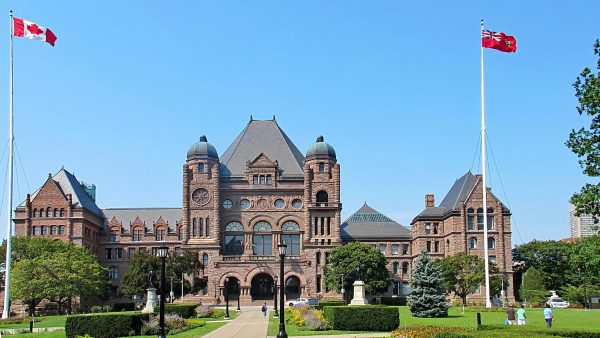 I have no idea if all bets are off. But you’ve got to think that the hallucinatory 48-hour period bracketed by Kathleen Wynne’s self-immolating concession and yesterday’s news bomb about Rob Ford’s widow, Renata Ford, launching a $16.5 million lawsuit against the man who would be premier must be mucking with the minds of many of those voters who weren’t organized enough cast their ballots in advance polls.

My own view, however, is that Wynne’s decision to effectively release Liberal voters will be far more impactful than the salacious but unproven Ford family drama, even though NDP organizers — including the bright spark who came up with idea of a late-night e-blast yesterday with the header, “You still up?” — are praying that lots of undecided female voters will be nudged left instead of right thanks to a story redolent of the Ford family’s habit of bullying women.

In a campaign with plenty of photo-finish races, the direction the Liberal vote migrates will determine the outcome. That said, you don’t need to be a political scientist or a pollster to guess that Liberals will drift to the left in the core areas of larger cities and to the right in more suburban ridings and smaller cities.

Indeed, to win the whole game, the NDP’s Andrea Horwath needs to convince not only lots of ex-Liberals, but specifically ex-Liberals in politically centrist areas like large parts of the 905, Ottawa, London, and Waterloo. I’m anticipating that much of the 416, which has already endured the Ford circus, will go orange, and perhaps those parts of Peel Region where Jagmeet Singh’s machine has been effective in recruiting party members and delivering votes.

But Richmond Hill, Markham, Ajax…? Frankly, I don’t see it. The NDP has strength in cities like Niagara Falls, Windsor and Hamilton, but it seem unlikely there are enough additional seats in those regions to offset Liberal GTA ridings that flip to the Tories.

So the eventuality I am preparing for on Thursday night is a slim Progressive Conservative majority, with substantial NDP representation in Toronto and a few other big cities, as well as a fairly close split in the popular vote.

A sea of blue surrounding islands of urban orange, plus a leader arriving in office lugging a trunk full of personal baggage. Sound familiar?

In fact, the architecture of a Doug Ford victory could be eerily similar to the way the electoral chips fell in the City of Toronto in 2010 – a core of downtown wards whose voters supported George Smitherman and elected progressives, encircled by Ford Nation councillors with varying degrees of fealty to Mayor Rob.

There is, moreover, every reason to believe that Doug’s approach to governing the province will borrow heavily from his days as consigliore in his brother’s administration.

Herewith, some thoughts about how history suggests he will rule:

Cabinet. You remember how appalling Ford’s executive committee was, in terms of representing the entire city? A collection of some of the dimmest burning bulbs on council. Welcome to Ford’s cabinet. Certainly, cabinet-making belongs in the realm of the dark political arts, but the smarter parties and leaders do understand why it’s important to spread the jam as far as possible. What complicates the process are stark geographical divisions, and a Ford cabinet will be no exception.

When his brother was mayor, the sole `downtown’ member of the executive committee was Jaye Robinson. Otherwise, it was an overwhelmingly male group of suburbanites who, at least initially, enthusiastically supported Rob’s culture war against the so-called downtown elites. Doug, of course, speaks that language well, and I will predict that his cabinet, with one or two obedient exceptions, will vividly reflect his indifference to the province’s urban voters.

First-Past-the-Post-ism. It seems to be a mode of governing for these divisive times, but Ford, like Stephen Harper, will rule as if he had won a landslide in the popular vote, even if he barely squeaked past Horwath. In fairness, he won’t be the first politician to take this tack, nor will he be the last. In Canada, Harper best exemplified the go-for-it philosophy of governing – that once armed with a majority, you press your foot all the way to the floor, never mind the fact that half the country/province/city didn’t vote for you and hates your guts.

In the vernacular of local politics, mayors are supposed to at least pretend serve all of the city’s residents, although that principle is sometimes most observed in the breech. At an altitude of 40,000 feet, premiers and prime ministers are supposed to do the same, but Ford will follow Harper’s lead and Mike Harris’ advice to ram through an aggressive and opportunistic agenda, popular vote be damned.

Blather. Remember Six-Sigma? No one really knew what the hell that phrase actually meant. But as his brother’s apparently business-savvy advisor, Doug loved to drop that nugget into debates about how the Fords would deploy new-age management science to whip the city’s bureaucracy into tip-top shape.

Suffice it to say no one in the city’s bureaucracy understood Six-sigma either, although I suspect more than a few people in the upper ranks quietly ordered themselves the inevitable how-to guide from Amazon. In the end, however, the city ended up spending a ton of money hiring KPMG to do a very conventional once-over-lightly on all municipal programs, the rather predictable results of which proved that gravy did not, in fact, flow copiously from the taps at City Hall.

The main (and intended) beneficiary of Doug’s wielding of Six-Sigma jargon was, of course, Doug himself, as the idea was clearly to apply much-needed burnish to an uninteresting career spent running (or ruining, if Renata’s allegations are to be believed) Daddy’s label printing business. As premier, Doug will trot out precisely the same sort of mumbo-jumbo when he begins to busy himself on the much ballyhooed line-by-line of the province’s budget.

Boasting. Politicians of all stripe are quick to take credit for good things they had little to do with, although this tick seems most evident on the right (e.g., Donald Trump’s contention that he and he alone caused markets to rise and employment to fall, never mind the long bull-run and extended economic recovery).

When the brothers Ford used to boast about their accomplishments, they tended to play fast and loose with statistics, claiming savings far in excess of what their policies had actually achieved. (In 2013, the Toronto Star’s fact-checking pro Daniel Dale meticulously de-constructed the Fords’ claim to have saved taxpayers $1 billion, an exercise that reveal how the boast was based on many eye-popping assumptions.)

If he is elected premier on Thursday, Doug will quickly deploy a very similar rhetorical pattern, claiming out-sized and illusory fiscal accomplishments just in time for the run-up to 2022 election. What will muddy this picture considerably is that Trump’s aggressive tariffs will laser target Ontario’s manufacturing sector and trigger a recession that will drag down provincial tax revenue.

In the event, it seems highly predictable that Ford’s preposterous claim about not firing civil servants will right out the window. But at the other end of a downturn, he may find himself in a position to take credit for ending the recession, whether or not his government’s policies had anything to do with it.

Contempt for Democratic Institutions. In one of the most precise parallels to the Trump era, the Fords in office expressed deep contempt for both council’s accountability officers – the bureaucrats they could not coerce directly – and the city’s police service. As revelations about Rob’s drug use and his shady friends began to surface thanks to the spade work of investigative journalists at both the Toronto Star and the Globe and Mail, the police began to circle – a development Doug responded to with accusations and veiled threats.

Just as telling was the way the brothers ignored the lobbyist registrar and attacked council’s integrity commissioner, both non-partisan officers that report to council on behalf of voters. Their disdain for council’s accountability officers was rooted in a whole other set of extra-curricular activities. Over the course of their term, evidence accumulated that the Fords, but Doug in particular, sought to use his position to advance the interests of the family company, as well as some other business cronies.

In one case, he helped a large Deco client lobby for a city contract. The deal didn’t go through, but the attempt produced deep discomfort among senior city officials who lived through the MFP scandal of the early 2000s and well knew the stench created when civic business is directed towards insiders.

Such incidents portend worse to come. Compared to the city, the provincial government is a far bigger, and much less well scrutinized, playground for someone who’s had a taste of the trough but sheaths himself in self-righteous rhetoric about respecting taxpayers.

Toronto voters know better. Soon enough, the rest of Ontario will, too.