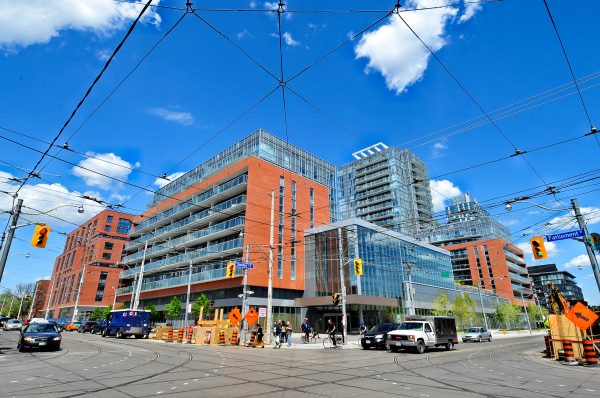 The intersection of Parliament St and Dundas St in 2010. The Regent Park neighbourhood is being revitalized with a mixture of condominiums, market-rate rental apartments and public housing.

Over the relatively short time span of just over a decade, Regent Park has gone from a place of significant disrepair and decay to a desirable destination.

And yet, 12 years into what is expected to be a 20-year, $1 billion-plus redevelopment process, the residents of Regent Park have been sidelined by the revelation that Toronto Community Housing Corporation’s board of directors made a decision in 2013, during the tumultuous mayoralty of Rob Ford, to re-open the bidding process for phases 4 and 5 of the redevelopment.

Regent Park residents were not informed of this decision until April, 2018. Through the Regent Park Neighbourhood Association (RPNA), the residents are demanding a say in the selection of a developer to build out the rest of the neighbourhood. Their actions speak to the need for designing RFPs and public housing redevelopment in more comprehensive and inclusive ways.

The delayed announcement of the decision made years ago to go to the market for phases 4 and 5 is remarkable given the emphasis TCHC has placed on community input and engagement in Regent Park. It was nothing short of disingenuous for TCHC to keep this decision from residents.

To be clear, Daniels (the site’s original developer) can bid for the right to be the development partner for phases 4 and 5. However, all opportunities come with costs. Aside from the financial cost to TCHC, there is also the cost of rebuilding trust between landlord and tenants.

While TCHC has not openly acknowledged the misstep and its reasons for breaching the spirit of resident consultation and engagement that has been the cornerstone of the revitalization process, it is attempting to regain lost ground. A Consultation Committee comprising the RPNA and the TCHC Tenant Council is now being formed to review and provide input on the community vision component of the request for vendor qualifications, as well as the request for proposals (RFP) document.

TCHC is also committing to involve the entire Regent Park community in the RFP process when residents will have an opportunity to rate the public presentations of shortlisted developers, their community economic development ideas, and their visions for the community.

Based on a host of measures, the re-development of Toronto’s Regent Park — from a formerly isolated neighbourhood comprised entirely of public housing units and low income residents into what is now a bustling mixed-income neighbourhood — is regularly cited as an example of Toronto’s success in inclusive city-building.

Regent Park’s transformation represents a made-in-Toronto model that provides residents with a right to return. It’s not just the wholesale change of the physical environment that has led to this success. From the outset of the redevelopment process, and prior to the approval of any plans or the selection of development partners, a public engagement process led by TCHC prioritized physical, social, and economic renewal.

To be sure, TCHC has a tough job. Its portfolio includes 58,000 units under management in 2,200 buildings across the city, valued at $9 billion. Nearly all TCHC households living in rent-geared-to-income housing have incomes below the poverty line. It is an organization that is stretched to the seams. A lack of sufficient funding from all three levels of government has resulted in an estimated $1.6 billion budget shortfall for repairing crumbling TCHC housing. In practical terms, this has led to the closure of hundreds of units over the past few years.

The leadership of TCHC has also undergone a series of abrupt shifts since 2009, with six CEOs over a nine year period. At the same, time, TCHC is engaging in three high-profile redevelopment initiatives that have the potential to reshape what it means to live in public housing for thousands of low-income Torontonians. Regent Park, Alexandra Park, and Lawrence Heights are all undergoing redevelopment from neighbourhoods of concentrated poverty to mixed income neighbourhoods. And, all have undergone extensive public engagement processes led by City planning and TCHC as the plans have taken shape.

Given the success of Regent Park’s transformation as a site of physical renewal and social opportunity, the decision to withhold information from Regent Park’s residents does not make sense. Even more striking however, is the residents’ respons of frustration, anger and disappointment.

Residents can and should demand change. Asking questions about the procurement process for determining the winning bidder for the final two phases of redevelopment are critical to designing a more inclusive process. For instance, what criteria should be considered when selecting a partner? Should the contract go to the bidder that can offer the highest financial return to an organization struggling to make ends meet? Or should the contract go to an organization that offers a mix of value through financial means, demonstrated success in real estate development, investment in physical and social infrastructure in the neighbourhood, and a commitment to supporting a range of employment, educational, cultural, and recreational initiatives?

But changes need to go deeper than just thinking about how the process can be more inclusive, open and respectful of resident needs. TCHC has an opportunity to use the upcoming RFP to model inclusivity and best practice.

The successful bidder should be required to adopt an anchor institution strategy. They should be obligated to create jobs for local residents, which pay above the minimum wage and that provide the prospect of job advancement into managerial and supervisory positions. Daniels, the developer for phases 1 to 3, has modeled this type of behavior through its offering of educational scholarships, funding for cultural and gathering spaces, the creation of a youth internship program, and a community presence that involves developing and supporting relationships in addition to building, selling, and managing housing stock.

The right to build the final phases of Regent Park should be determined based on a broad definition of what’s best for the community and its residents.

Shauna Brail is Director and Associate Professor, Teaching Stream at the Urban Studies Program, University of Toronto. Follow her on twitter at @shaunabrail.

Alfred Jean-Baptiste is Executive Director of the Toronto Centre for Community Learning & Development. Follow him on twitter at @alfred_ccld.