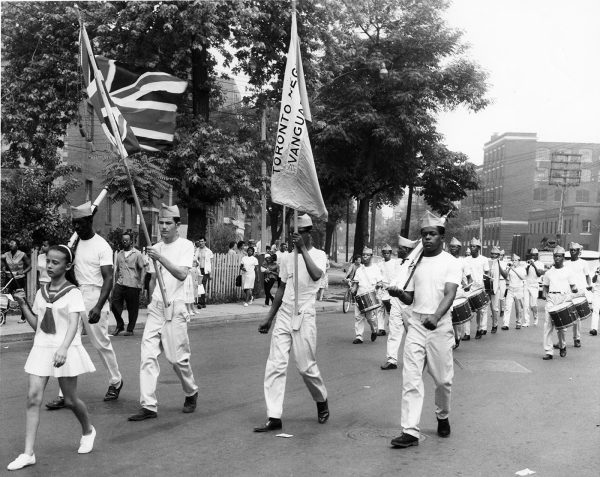 At sunrise, a large crowd gathered for an early church service at the British Methodist Episcopal Church on Sayer Street (later Chestnut). Church services were an integral part of Emancipation Day observances — marking the day, eighteen years earlier, when slavery was legally abolished in what we now call Canada. The annual commemoration began with the congregation giving God thanks for delivering them, their relatives, and their ancestors from bondage. As the Globe reported, celebrants then gathered at Richmond and York Streets at 11:00 a.m. to march through the streets, led by the City Brass Band. They made their way to Holy Trinity Anglican Church (now surrounded by the Toronto Eaton Centre), where Rev. Henry Grasett delivered a sermon. The procession carried on to City Hall, then to St. Lawrence Market, where the parade’s grand marshal, Black resident William Harris, delivered a welcome.

The crowd partook in an elaborate lunch at a location east of Yonge Street, hosted by freedom seeker and master saw maker Thomas Smallwood. Black abolitionist Samuel Ringgold Ward, Presbyterian minister Robert Easton Burns, and Congregationalist minister Adam Lillie all spoke. The paraders regrouped in front of St. Lawrence Hall and marched back to Richmond and York Streets. After cheers for Queen Victoria, the City of Toronto, the day’s speakers, and the City Brass Band, the crowd dispersed. In the evening, however, there was a soiree at St. Lawrence Hall organized by local Black women. The well-attended program consisted of music, singing, toasts, and speakers.

The 1793 Act to Limit Slavery, passed in Upper Canada, did not abolish the slave trade in Canada, as some mistakenly believe. Although slavery was gradually being phased out, it still existed in Canada when Britain passed the Slavery Abolition Act, affecting most of its colonies, on August 26, 1833. This act became law on August 1, 1834, a day of celebration for those who were freed immediately. Those forced into indentureships after that date would have to wait until August 1, 1838, to be completely freed.

Emancipation Day was commemorated in Canada from the day the Slavery Abolition Act took effect. Marking the end of enslavement had significance in early Toronto, where Blacks were enslaved at the turn of the eighteenth century. Town of York censuses from between 1797 and 1808 counted 13 enslaved Black men, women, and children owned by provincial administrator Peter Russell, provincial secretary and registrar William Jarvis, and Solicitor General Robert Gray.

By the early 1800s, there were more freed and free Blacks in Toronto. Some had been held in bondage in Ontario and received their freedom as the province phased out slavery. Black Loyalists were escaped slaves who had won their freedom by fighting in defence of Britain during the American Revolution, and were then evacuated to the northern British colonies (i.e., Upper Canada). Finally, a trickle of African-American freedom seekers had fled to Canada after the 1793 Act to Limit Slavery stated that Blacks entering Ontario would be considered free. Consequently, the Slavery Abolition Act, 40 years later, freed enslaved Blacks while simultaneously making Canada a free land for African-Americans who remained enslaved. Thus the ideal of Canada as a safe haven for African-American freedom seekers was born. Thousands of freedom seekers and free Blacks arrived between 1834 and the 1850s and celebrated their newfound liberty.

By the mid-nineteenth century, Toronto had become a centre of abolition activity in the fight to end American slavery. Mary Ann Shadd Cary published the Provincial Freeman, a weekly newspaper headquartered and printed for a short time on King Street just west of Jarvis Street, to dispel stereotypes of Blacks, promote anti-slavery ideals, denounce American slavery, and discuss the problems facing freedom seekers in the province. The Toronto Globe, a mainstream newspaper edited by George Brown, supported anti-slavery and the Black community, and helped found the Anti-Slavery Society of Canada. Many anti-slavery meetings were held at St. Lawrence Hall, including speaking engagements with guests such as renowned African-American abolitionist Frederick Douglass. During the 1851 North American Convention of Coloured People, delegates passed a resolution declaring Canada West “by far the most desirable place of resort for coloured people, to be found on the American continent.”

This background informed the social climate around Emancipation Day celebrations. Blacks were dealing with the after-effects of 206 years of racial slavery in Canada and ushering in an uncharted era of liberty. Celebrations in Toronto began in the 1830s and continued to grow over the next two decades as an annual event. A diverse Black population commemorated Emancipation Day: former locally enslaved Blacks and their descendants; Black Loyalists and their descendants; free Blacks, freedom seekers, Canadian-born Blacks, and West Indian immigrants. Some white community members also joined in. Men and women of different racial, social, and economic backgrounds came out in the hundreds from around the province and the United States. Emancipation Day became a public arena where the evolving social interactions between races, genders, and religious denominations played out.

The twentieth anniversary of the passage of the Slavery Abolition Act was a grand affair in Toronto’s Black community, approximately half of whom — or about five hundred — lived in St. John’s Ward. Committee members, both male and female, from Black churches in and around The Ward (the BME Church, the First Baptist Church, and the Second Wesleyan Chapel), made elaborate plans. The BME group began with a prayer service at 5:00 a.m. Several hours later, celebrants gathered at the Government Grounds on Front Street, between John and Simcoe Streets. A parade marshalled by William Thompson and Charles Peyton Lucas, and led by Scott’s Brass Band, marched to Brown’s Wharf, at the foot of Yonge Street, to welcome celebrants arriving from Hamilton on the steamer Arabian.

Thomas Smallwood Sr., a freedom seeker and one of the organizers, addressed the visitors: “Fellow subjects of this noble province, and citizens of Hamilton, It is my pleasing duty, in behalf of a portion of my fellow citizens of Toronto, to welcome you, who have honoured us this day with your presence, to partake of a festival in commemoration of one among the greatest events in British history, when that magnanimous nation swept the bonds from 800,000 bondsmen, and made them free…”

The parade continued on to St. James Cathedral, where Reverend Grasett, a regular Emancipation Day speaker, delivered a sermon. Afterwards, celebrants marched back to the Government Grounds for a lavish lunch, followed by speeches and entertainment. Smallwood, the event’s president, invited George Dupont Wells, a local white lawyer, to read a speech written by the organizing committee and dedicated to Queen Victoria, expressing gratitude — on behalf of Toronto’s Black community — to Britain for abolishing slavery:

“May It Please Your Majesty:

We, the Coloured Inhabitants of Canada, most respectfully, most gratefully and most loyally approach you Gracious Majesty, on this, the anniversary of our death to Slavery, and our birth to Freedom. With what feelings, or what words can we adequately express our gratitude to England for such a boon?…

What a happy, what a proud reflection it must be to your Majesty, to know that the moment the poor crushed slave sets foot upon any part of your mighty dominions, his chains fall from him — he feels himself a man, and can look up…”

To close the lunch program, the group made several cheers, resolutions, and toasts to the Queen, colonial officials, and “our wives and sweethearts.” In fact, such toasts and resolutions were a common feature of Emancipation Day celebrations. They often expressed the Black community’s loyalty to, and appreciation of, the British Crown. But these declarations also highlighted the various forms of racism that Black Canadians were still working collectively to address.

Finally, on that day, celebrants regrouped to march together to see a new Black lodge and then returned to the Government Grounds for a soiree. The activity-filled day was capped with a spectacular display of fireworks accompanied by a band, with tea served.

Also in the 1850s, Dr. Anderson Ruffin Abbott became the first Canadian-born Black doctor after graduating from the Toronto School of Medicine. His parents, Wilson Ruffin Abbott and Ellen Toyer Abbott, were free Blacks of means, and active in providing assistance to freedom seekers and participating in local Black church organizations. For Anderson Abbott, one of the most memorable sights that day was a tall Black man marching with the 92nd West India Regiment — “a drummer,” as he later recalled, “known as Black Charlie.”

The Globe reported that the 1858 Emancipation Day celebrations began with an early-morning service at the BME Church, conducted by Bishop Walter Hawkins. The parade, led by a band, started just after 10:00 a.m. Waving flags and carrying banners, the marchers went to St. James Cathedral to attend a full service by Reverend Grasett and the Reverend Canon Edmund Baldwin, St. James’s assistant minister. Baldwin preached a stirring sermon, expressing hope that slavery in the US would soon end.

When the service concluded, the celebrants marched through the main streets to the university grounds for a splendid lunch. Following the meal, Rev. William M. Mitchell, a Black abolitionist minister at the Coloured Regular Baptist Church at Terauley (Bay Street) and Edward Streets, addressed those assembled. To bursts of applause, he spoke about the great boon of 1834 that saw 800,000 enslaved Blacks freed from bondage. He also condemned the U.S. for not ending the heinous institution.

The Globe described the rest of the day: “[A]bout five o’clock the procession again got into marching order, and proceeded along Queen and down Church streets to the wharf where they all went on board the Fire Fly, Captain [Robert] Moodie having invited the party to a free excursion to the Island. Nearly sixty persons partook of tea on the Island, and spent a few hours in a very happy manner.”

During the evening, there was a party in St. Lawrence Hall, with tea, a lineup of speakers, and live music. The funds raised through ticket sales were directed toward the construction of a new church. Some attendees then went to Louis Kurth’s Tavern and Concert Hall, on Adelaide Street, across from the York County Court House, for dinner, cocktails, song, and lively conversation.

Over almost two centuries, Emancipation Day celebrations have continued to evolve, but they remain a cultural fixture in Toronto’s Black community. There is a contemporary connection to Emancipation Day celebrations in the Caribana Festival introduced to the city by West Indian immigrants in 1967. They drew on familiar traditions from their countries of origin, but also continued the long history of Black Canadians who celebrated freedom in the streets of the city they all called home.

Educator and author Natasha Henry is the president of the Ontario Black History Society and a PhD candidate at York University. Follow her on twitter at @NHenryFundi. This essay is excerpted with permission from The Ward Uncovered: The Archaeology of Everyday Life (Coach House Books, 2018).