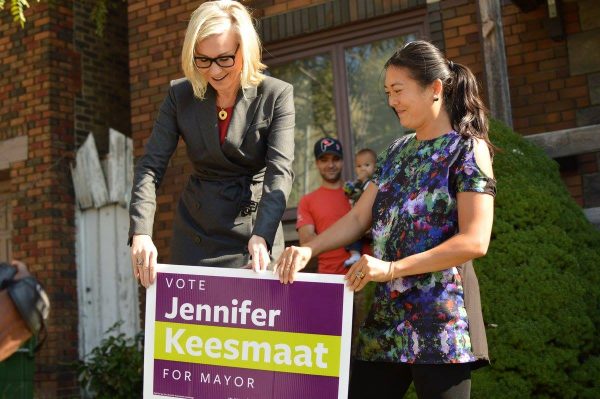 Like any good double entendre, a vote cast is a form of expression that can — and arguably should — carry multiple meanings. You can both vote for one candidate and against another, or you can place a strategic bet on a particular outcome. Your ballot can carry protest, fury, or encouragement. It speaks in multiple voices.

Many, though likely not enough, Torontonians will vote next Monday for Jennifer Keesmaat in order to send Mayor John Tory a sharp message.

Others will want to sternly remind Tory that his cruise control mayoralty isn’t fine, thank you very much.

These are entirely legitimate ways of supporting Keesmaat, and I expect that a good deal of her backing will come from voters in the older parts of the city who had hoped — in the anxious-making 2014 run-off against Doug Ford and Olivia Chow — that Tory would turn out to be more progressive than conservative. He didn’t.

Today, as this dismal campaign limps to the finish line, I’d argue that there’s a strong case for supporting Keesmaat specifically because of her invitation to Torontonians to vote for integrated and forward-looking urban planning — for a change.

It’s no surprise that planning has turned out to be Keesmaat’s political lodestar, in the way that other candidates will foreground fiscal restraint, economic development, transit expansion, or social harmony as the ideological foundation upon which the rest of their programs balance.

Because of Keesmaat’s visibility as chief planner, her platform – an ambitious housing target, better public spaces, evidence-driven transit, etc. — hasn’t felt like a big reveal, and much of it references the work done under her watch. Nevertheless, it is worth enumerating just how unusual it is for a mainstream mayoral candidate to build a campaign around this particular set of aspirations and ideas.

Of the 12 men and women who have run mainstream mayoral campaigns since 1997, not one had a planning background. All current or former politicians, several were lawyers or came to politics via business. None came from the worlds of public service, development, or urbanism (Barbara Hall is the one exception, having worked as a youth and human rights advocate before jumping into local politics).

While David Miller ran campaigns in 2003 and 2006 that had high visibility planning platform planks (his opposition to the island airport bridge in 2003, and then the proposed Transit City in 2006), both played broader roles in his political narratives (as a metaphor for corruption and an instrument for social justice, respectively).

Mel Lastman thought about planning only insofar as it might help Toronto’s Olympic aspirations and/or drive investment to the North York city centre corridor. I’m not even going to talk about Ford.

In fact, the last mayor who presided over important planning reforms was Hall, and that was during her 1994-1997 pre-amalgamation term. She didn’t run for mayor on a planning platform, but her bold work on that file not only defined her term, but also dramatically altered the future of the downtown. (Pressed by Paul Bedford, Ken Greenberg and Jane Jacobs, Hall ushered in “the Kings” planning experiment, which established as-of-right zoning in the then-languishing industrial areas around Spadina and Parliament, triggering the warehouse conversion boom.)

Considered in the aggregate, Keesmaat’s promises, revealed over the course of the past two months, present a candidate who clearly intends to eliminate the vapor gap that has long separated the planning brain trust at City Hall and the political classes, whose members have all too often rejected their own officials’ advice in the name of fiscal restraint, parochial calculation or simple ignorance.

While earlier generations of municipal planners, especially those who wanted to clear-cut working class neighbourhoods and build freeways, thankfully ran into a wall of citizen and political opposition in the late 1960s, the arrow of culpability now points in the opposite direction. We live in an under-taxed city governed by politicians who have, with a few exceptions, ignored their planning officials’ expertise and therefore failed to make the vital investments required to keep the city livable.

Irritated by gridlock, crazy housing costs, sardine-tin transit? Don’t blame the planners, who have been sounding the warning bells for decades. The paying-the-piper moment is coming soon, and quickly.

It’s important to note that under her watch, Keesmaat’s planners initiated forward-looking exercises like TOCore (2014-2018), an innovative growth management strategy designed to allow the City to accommodate the astonishing population growth downtown. A similar process is underway at Yonge and Eglinton.

As former city manager Peter Wallace did with his warnings about a structural deficit, these bureaucratic initiatives reveal how officialdom at City Hall has been thinking deeply, and intentionally, about all that’s required to ensure Toronto’s future livability. A few councillors listen. Too many others, including the current mayor, have preferred to kick the proverbial can down the road.

Though it reflects much of this work, Keesmaat’s platform isn’t perfect, nor should anyone expect it to be a plug-and-play solution. I have quibbles about her Gardiner plan as well as some of the assumptions in her transit strategy, especially the bit about the province ponying up for extra stations on the Scarborough line. But Keesmaat is no stranger to the cut and thrust of planning debates, and I’d expect this outlook would inform her approach if she ended up in the mayor’s office.

There are a few other question marks. Some of her timelines seem more political than achievable, as she surely knows. As well, she too easily fell prey to the stubborn Fordian calculus of Toronto politics, which posits that additional taxes are utterly unbearable to the electorate and must be avoided at all cost.

But in the main, Keesmaat’s aspirational program is rooted in professional analysis and informed by the ideology that has guided her career, which is that successful and sustainable cities thrive because of smart planning that anticipates the future and guides growth accordingly.

Can anyone honestly say that Tory’s mayoralty is grounded by any similar set of ideas or visions? Strip away the rhetoric, and what does one find? A commitment to good manners…. As my colleague Shawn Micallef asked in the Toronto Star on the weekend, “Why does John Tory want to be mayor?”

With Keesmaat, the answer isn’t elusive or difficult to discern. She wants to be a mayor who finally gathers up all of the planning and urbanist wisdom that circulates in this city and transform those progressive-minded insights into the policies we so obviously require for the coming decades.

That, it seems to me, is what a vote for Keesmaat means.