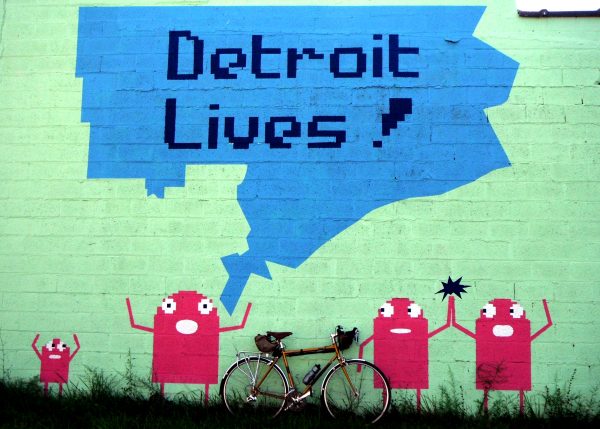 Claire Stevenson-Blythe is entering her second year in the Master of Science in Planning program at the University of Toronto. Her interests are in community-driven and inclusive development, urban equity, and the importance of policy in community change.

Landing in Detroit held much anticipation; both as a student in urban planning and as a young person from Toronto, I had heard countless stories about this city in transition. The struggles of post-industrial Detroit have been often-discussed both in urbanist circles and in academic contexts, but there was another narrative. A city on the incline, one where residents had reclaimed spaces deserted by the financial crisis and disinvestment. The vibrancy and strength of local communities, the prevalence and centricity of techno music, and an overall sense of deeply-rooted and resilient change. While many young people go for the music, and many urban planning students such as myself go to experience a different type of city, I was inspired and appreciative to go with my placement supervisor Jay Pitter, an author and international placemaker, who had many local connections due to her work in Detroit. Landing, something one of my colleagues (and a past-Detroiter) told me echoed through my head: “There is so much to learn from Detroit”.

Our three days spent there were held in the arms of jaw-dropping architecture: historic art-deco buildings that had me in a constant state of awe. One of these architectural gems was the Shinola Hotel, where we met with Lauren Hood, Live6 Alliance founding director and Detroit City Planning Commission member. Settling into the Shinola’s eclectic lobby and bar, the Living Room, we learned that its branding as Detroit-born is somewhat controversial due to its original ownership by a Texas-based investment group; nevertheless we enjoyed it immensely. We were surrounded by local art, a cozy atmosphere and warm lighting, high ceilings and great music. Looking around, we realized the art above our heads was done by the son of a local artist whom we had met the previous day, and this cemented a feeling that was to be echoed throughout this trip; the connection of the community and the presence that local Detroiters held in the various spaces we navigated.

We then met with Tiffany Brown, architectural designer with Smith Group and founder of 400 FORWARD, an initiative that supports primarily young African American women in the architectural field through exposure, mentorship, and financial assistance. She brought us on a site visit on the East Riverfront, where we experienced the development process of bidding for a building in a transitioning neighbourhood. This was vastly different than anything I had experienced in Toronto; this building was decaying, overgrown, with old faded decor of its former life. In a city like Toronto where land is valued so highly, there isn’t the time for a building or site to become worn-down. To be able to walk through these buildings in this state felt somehow out of bounds or secret…encompassing a story that buildings in Toronto don’t have the time to tell.

On the following rainy Sunday morning, we hopped in a Lyft to meet with ill Weaver, a Detroit-based artist and organizer who, among other things, co-founded the Detroit Narrative Agency (DNA) which supports shifting harmful media narratives of the city toward liberation and justice. Weaving through the backstreets, we soon realized we were lost; the GPS had misled us and the driver was unsure of our destination. After a couple circles around the block and some frenzied Google searches, we finally arrived at a nearby family-owned restaurant and joined ill for breakfast. While discussing a new regeneration plan in Detroit’s Corktown neighbourhood, we learned about some challenges that weren’t openly discussed in the larger development conversation: the attempted displacement of a local and long-existing soup kitchen, the violence that the local homeless population had experienced by enforcement personnel, and the lack of equitable involvement of the local community in this regeneration plan. What struck me was the breadth and extent of ill’s land-use and planning related knowledge, and what became clear through this conversation was how this knowledge was a form of survival; a necessity to protect their communities from the relentless pressures of urban planning — and displacement — in the city.

The time spent in Detroit left me humbled and calm. While we often hear about stories of cities, it is rare to get a chance to navigate through the local avenues of the community. Cities like Detroit are often observed; people experience these cities as visitors, learning what they can from their positionality as an outsider. Through these connections, it was unique to experience Detroit through the lens of long-time community members. This time solidified my respect for the importance of local knowledge, recognizing that as cities continue to change, it is that knowledge that must lead the waves of development that come. While landing back in Pearson, I considered what informs Toronto’s development and urban change; what is the local knowledge that is valued here? How has Toronto’s relative economic stability progressed a certain kind of development? What does getting lost look like in a city that has an identity around being found? And echoing my colleague, what can Toronto learn from the community-driven initiatives in Detroit?