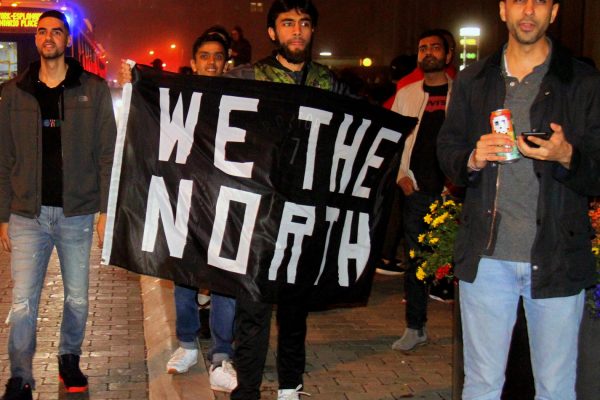 The hundreds of thousands of soccer fans spilling onto St. Clair West after Italy’s 1982 World Cup victory marked a turning point for the city: evidence, after decades of caricatures and racist stereotypes, of the confidence of a large immigrant community finally attaining social, commercial, and even political acceptance.

A decade later, the Blue Jays’ first World Series win represented a continental victory for a city nervously figuring out its place in a new-ish free trade deal. Tens of thousands of people flocked onto Yonge Street, Toronto’s default public space for such mass occasions, but also because the Skydome, then just three years old, was still surrounded by a wasteland of decommissioned marshalling yards.

As many other commentators have noted, the Raptor’s stunning championship reflects the youthful and thoroughly global city-region that has embraced the thrilling inclusiveness of this sport. 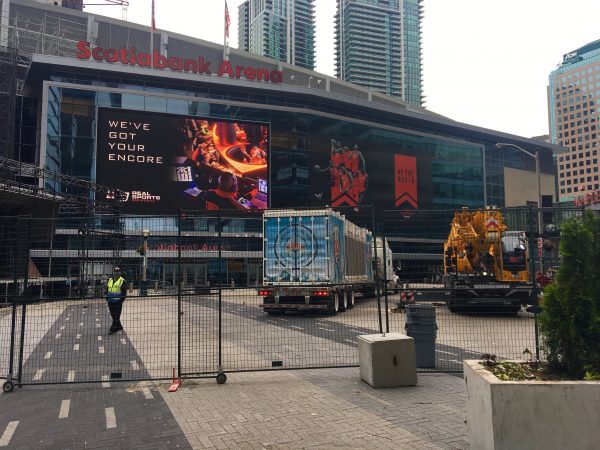 But to my eye, the Raptors’ victory also had a great deal to say about what Toronto has learned, fitfully, about urban form and public space in the 27 years since Dave Winfield slugged an 11th inning double to clinch the Jays’ victory.

Instead of taking to the rooftops of two-storey retail stores lining Yonge and St. Clair West, fans this time cheered at one another from the balconies of their condos in soaring high rises that had not been developed in the 1990s.

More importantly, the celebrations played out in public spaces that didn’t exist when the Jays won, but have now become iconic and deeply embraced places in the region’s psycho-geography.

Maple Leaf Square, a.k.a. Jurassic Park, sits at the eastern terminus of a broad stretch of Bremner Boulevard, named after a legendarily hard-assed former works commissioner. It is bookended by Scotia Bank Arena and the Rogers Centre, and lined by wide sidewalks and soaring buildings — a stretch that reminds me of a bit of the Avenue of the Americas in New York City.

Through the late 1980s and early 1990s, Toronto council had been fighting with the railways about how to develop those lands, with city politicians advancing well-intentioned, earnest plans for mid-rise affordable housing. (Progressive politicians had scoffed at the idea that a baseball stadium even belonged there.)

In the years immediately following the Jays’ victory, the upstart Raptors organization began building their basketball stadium on the site of the old Canada Post sorting facility — a tense period that also saw the Maple Leafs pushing then-mayor Barbara Hall for permission to cantilever a new hockey arena over Union Station to replace the soon-to-be-mothballed Gardens.

That scheme evaporated when the Leafs bought the Raptors and decided to turn what would become the Air Canada Centre into a multi-sport facility. In the years since, condo towers sprouted on the fallow parcels between Skydome and the new arena. More recently, sleek glass office towers and hotels have also elbowed their way into SouthCore, with the revamped concourse of Union Station serving as not only a conduit to the downtown but as a 24/7 commercial core for South Towners. 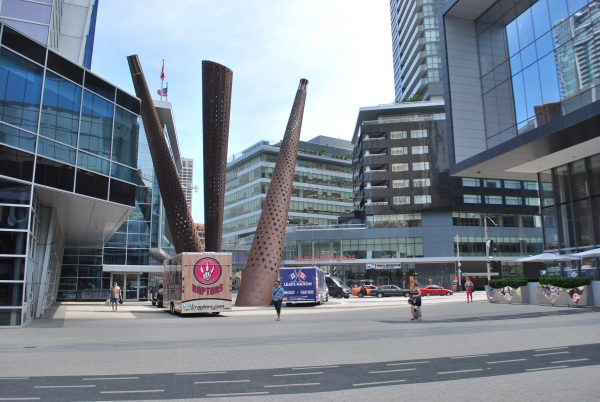 Maple Leaf Square, on planning maps, began as little more than an elbow in an off-ramp from Lakeshore Blvd., a kind of traffic sewer for in-bound commuters and the users of an underground parking garage serving the giant Maple Leaf Square complex (hotel, condo, retail). A modest plaza afforded a view of the arena’s western wall, adorned by a pair of giant crossed iron tubes and little else.

By design, however, Maple Leaf Square ended up with the sense of enclosure of a spacious and well proportioned outdoor room (check out Section 8.2.5 in the Railway Lands East Secondary Plan to see why this wasn’t an accident). Five years ago, when the Raptors re-branded — #WeTheNorth — and announced they’d host outdoor fan parties for viewing playoff games on a big screen, just like the Leafs, that partial cul de sac came to be known as Jurassic Park. So began the process of re-arranging the geography of civic celebration in the city.

About a kilometre north, Yonge-Dundas Square, which became the focal point for last Thursday’s post-victory celebrations, also didn’t exist when the Jays won their World Series. The brainchild of a handful of downtown planners and championed by former downtown councillor Kyle Rae, the plan involved expropriating a triangle of tired low-rise commercial buildings, as well as much of the north side of Dundas immediately east of Yonge (for years, an arcade). According to the plan, those structures would be demolished and replaced with an open space bounded by higher density buildings.

Some of council’s right-wingers, led by the now-disgraced Tom Jakobek, led a rearguard legal fight to stop the plan, but Hall and Rae prevailed, although development on the north side of Dundas was stalled for years due to sluggish real estate conditions. The square’s architects, James Brown and Kim Storey, envisioned a fluid concrete tableau that would evolve organically, as the city did. But council couldn’t stomach the idea of an unfettered public space, so Yonge-Dundas was fitted out with a parking garage, to generate operating revenue, and a management plan, to prevent spontaneity. 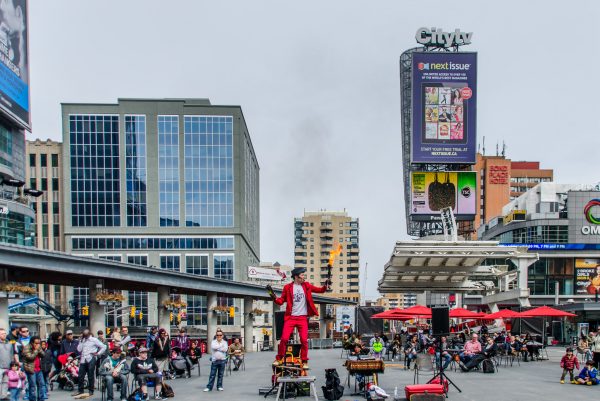 Rae correctly envisioned Yonge-Dundas as a Times Square-like civic space that would impolitely elbow its way into the heart of a provincial no-fun city that had struggled for generations with the notion that urban land might be put to any use other than commerce, domesticity, religion and transportation. Yonge-Dundas, which opened in 2003, did all that, but, even more importantly, created a countervailing gravitational force to compete with the Eaton’s Centre, which had systematically sucked the street life off Yonge since it opened in the 1970s.

The noisy digital billboards (which I love) and the proximity of all the name brand retailing distinguishes Yonge-Dundas from the downtown’s two institutionalized public spaces: Nathan Phillips Square and Queen’s Park. Its compellingly chaotic energy and funhouse vibe became the obvious destination for post-victory Raptors mania. Like Jurassic Park, the enveloping sense of the outdoor room expresses something at the heart of what the Raptors have come to signify about this region, which is the idea of the big tent in which everyone not only fits, but is also welcome.

It’s worth acknowledging, of course, the other giant Jurassic Park that formed, more or less spontaneously, in the square in front of Mississauga Civic Centre, a po-mo pile (1984) situated next to the vast concrete shopping expanse that is Square One.

Now dutifully abutted by cultural and civic venues, as well as a cluster of high-rise towers across Burnamthorpe Road, this place has none of the boundedness that defines Maple Leaf and Yonge-Dundas squares. But as with these two public spaces, the Raptors’ playoff run permanently tattooed a sense of place, community and history onto all that carefully manicured municipal landscaping.

In other words, the officiously ceremonial yielded to the inclusively celebratory. The city-building that transformed so much of the downtown will follow, inevitably.