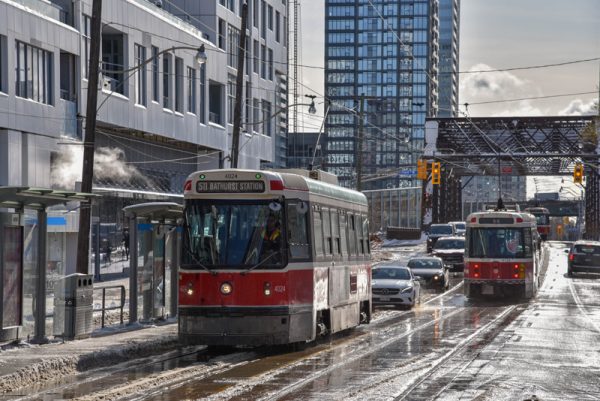 CLRVs on Bathurst Street in November 2019

At the end of December 2019, Toronto’s iconic CLRV streetcars will depart from city streets after more than 40 years serving the city. While these streetcars are not wheelchair accessible and suffered reliability issues in their later years (especially in winter), on the whole, they were a dependable vehicle that stood the test of time and served Toronto well.

The CLRVs were part of the last generation of high-floor streetcars, trams and trolleys developed in the late 1970s and early 1980s. In Toronto, after the decision was made to retain streetcars in the early 1970s, the TTC looked for a new vehicle to replace PCCs that were over 30 years old. The TTC purchased 190 CLRVs from the Urban Transportation Development Corporation, an Ontario Crown Corporation, with a further 6 prototypes from SIG of Switzerland. They were all built between 1977 – 1981.

To further augment the fleet and retire most of the remaining PCCs – some of which were over 40 years old – the TTC ordered a further 52 6-axle Articulated Light Rail Vehicles (ALRVs) between 1987 – 1989. Together, these 248 streetcars would form the backbone of the city’s fleet for almost four decades and became one of the most recognisable icons of Toronto.

This article will examine other urban rail transit vehicles that were developed in this time and assess how they compared to Toronto’s streetcars.

In North America, by the mid 1970s, only Toronto, Boston, Newark, Pittsburgh, Philadelphia, Shaker Heights (Cleveland), San Francisco and New Orleans operated streetcars. No new vehicles had been constructed since the early 1950s and there were no domestic companies making trolleys. To replace these ageing fleets, the US Department of Transportation (US DOT) helped fund the development of a Standard Light Rail Vehicle (SLRV) that would be built by Boeing Vertol, who were keen to enter the rail market to offset declining government defence contracts. The aim was to develop a standardized vehicle suitable for both the remaining trolley systems and other cities planning new light rail lines (i.e. San Diego, Portland). In the end, only Boston and San Francisco purchased new LRVs from Boeing, which were built between 1976 – 1979.

The SLRVs were problematic, to say the least; major issues included derailing on tight curves, doors that kept breaking down, electrical failures and corrosion. Boeing had never developed a streetcar before and a took a systems approach to the project. This meant virtually everything needed to be developed from scratch, rather than using technology that, in Europe and Japan, continued to advance in the post-war decades. It also meant that there were no prototypes that could be tested in either city.

Boston signed a contract for 175 SLRVs. However, they were breaking down so frequently that the MBTA had to cannibalize dozens of brand new vehicles for spare parts, in order to keep enough LRVs running to provide a basic service. They hid many of these LRVs in unused parts of their trolley subway, and ultimately rejected the last 40 from Boeing altogether. 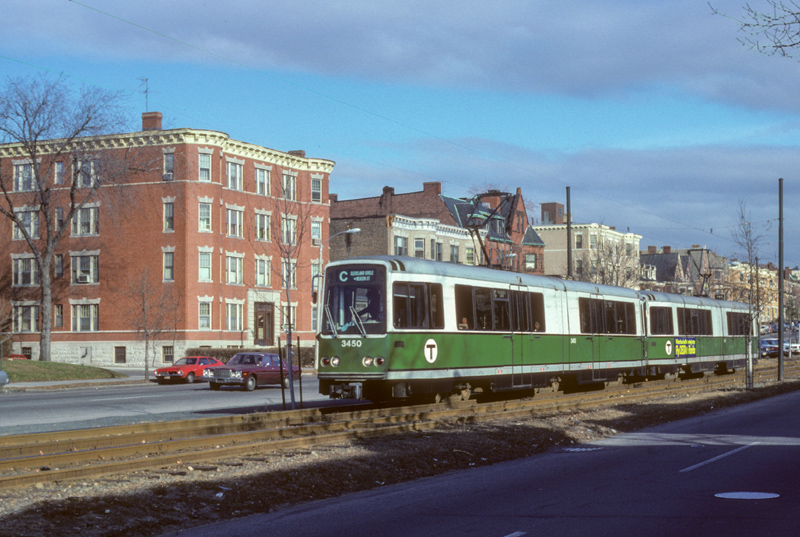 San Francisco would acquire 131 SLRVs, including 31 of the rejected Boston vehicles. However, here too, they were troublesome and never fulfilled their goal of coupling 4 car trains together to run in their new downtown subway. 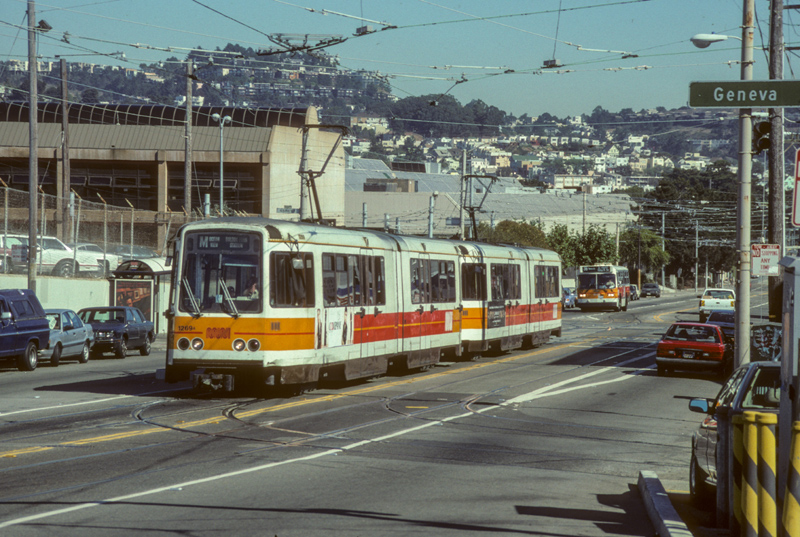 Less than 10 years after they were built, both cities began actively looking for new vehicles to replace their Boeing LRVs. The Federal Transportation Administration, which funded the project, took the unprecedented step of reducing the economic life of these vehicles from ‘at least 25 years,’ to only 15 years. Boston began replacing their Boeings in 1986, when 100 new LRVs were purchased from the Japanese manufacturer Kinki Shayro. The last Boston Boeings were retired in 2007. San Francisco’s replacement – from the Italian firm Breda – were also not problem-free; however they enabled their Boeings to be taken out of service by 2001.

While the Boeing SLRV was a failure, its basic design principles – a double ended, six-axle, single-articulated vehicle – set the standard that most North American cities (Toronto, Philadelphia and Buffalo being exceptions) would adopt in the coming decades.

By the mid 1970s, Philadelphia had the largest trolley network in the US, though it was a shadow of its pre-World War II self. When SEPTA took over transit in southeastern Pennsylvania from private companies in 1968, there were 14 trolley routes (including 5 that used a downtown subway) and over 400 old PCCs. The 1970s were not kind to Philly, or its streetcars. Several North Philadelphia routes were abandoned and dozens of PCCs were lost in a carhouse fire. The city was also losing population and jobs. However, the subway-surface trolley routes in West Philadelphia remained busy and SEPTA began looking for a replacement vehicle.

As a side note, as part of a stop-gap measure, SEPTA purchased some third-hand ex-TTC PCCs that Toronto had purchased from Birmingham and Kansas City in the 1950s. 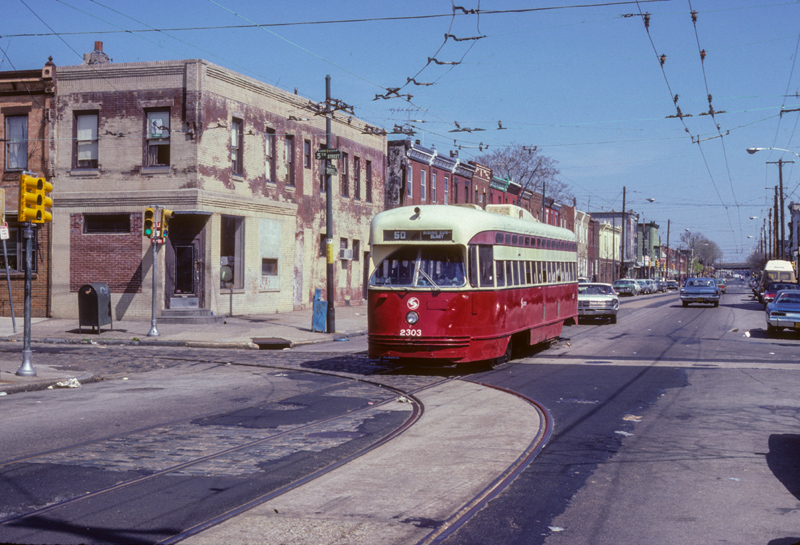 For a variety of reasons, SEPTA was not interested in the Boeing cars, even though they would be constructed within the region. The tight curves, particularly in the subway, necessitated a vehicle that was different from other trolley and light rail systems. SEPTA awarded a contract to Kawasaki Heavy Industries of Japan to deliver a 4-axle, unarticulated trolley, similar to the CLRV. 112 K Cars, as they became known, were delivered for the 5 subway-surface routes between 1980 – 1982. Like in Toronto, these routes still run in mixed traffic, with passengers having to walk out to the trolleys, which run down the middle of the road. Philadelphia also still uses a trolley pole, rather than a pantograph, to draw power from the overhead wire. A further 29 double-ended versions were acquired to modernise two suburban trolley routes as well. 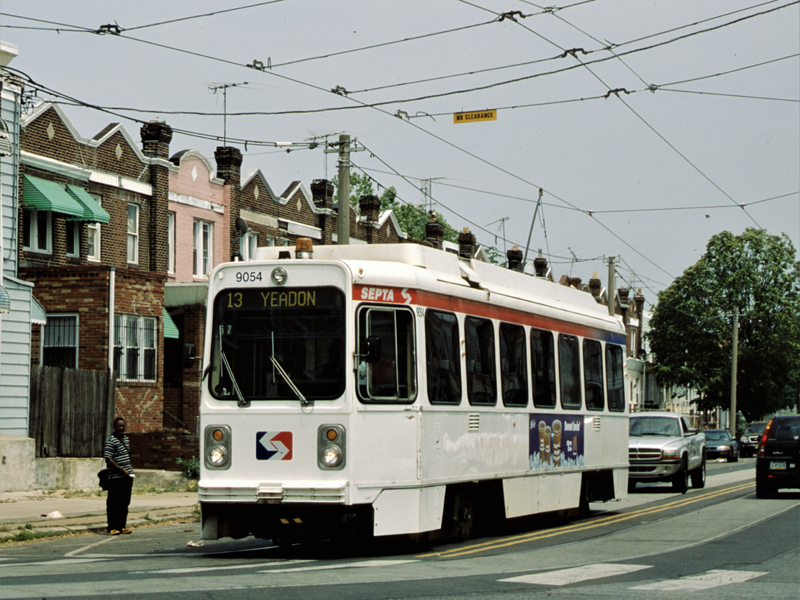 Like the CLRVs, the K Cars have been dependable and reliable and have served the city well. The 5 subway surface routes are some of the busiest lines in the city, and collectively carry around 70,000 riders per day, which is less than Toronto’s 504 King route, but still impressive by American standards. SEPTA is now looking at replacing their Kawasaki Cars and modernising the system, bringing it up to light rail standards. While the K Cars will likely have a longer service life than the CLRVs, their days are also numbered.

While North America stopped building trolleys shortly after World War II, in Europe the tram continued to develop and evolve. In West Germany, most cities retained their tram networks and many were modernised in the 1960s and 1970s. One idea that was popular in mid-sized cities that were not large enough to construct full subway systems (or U-Bahns), was the Stadtbahn: essentially a light rail concept of private rights of way, longer distances between stations, with trams running in a subway downtown.

In the mid 1970s, the tram companies of Essen, Mülheim, Bochum and Bielefeld teamed up with Düwag, a Düsseldorf-based railway builder, to develop a new vehicle that could meet these changing needs. Unlike Boeing, Düwag had been in the tram-building business for many decades, and the product of this partnership was the highly successful M-type (for metre gauge systems) and N-type (for standard gauge).

One pioneering development was their ability to serve both high- and low-floor platforms. This was done by collapsing part of the floor into steps near each door (though passengers had to be careful not to stand in this area if the doors were about to open at a low-platform stop!) This versatility enabled these trams to easily navigate through subways (sometimes shared with U-Bahns), private rights of way, and street running track. 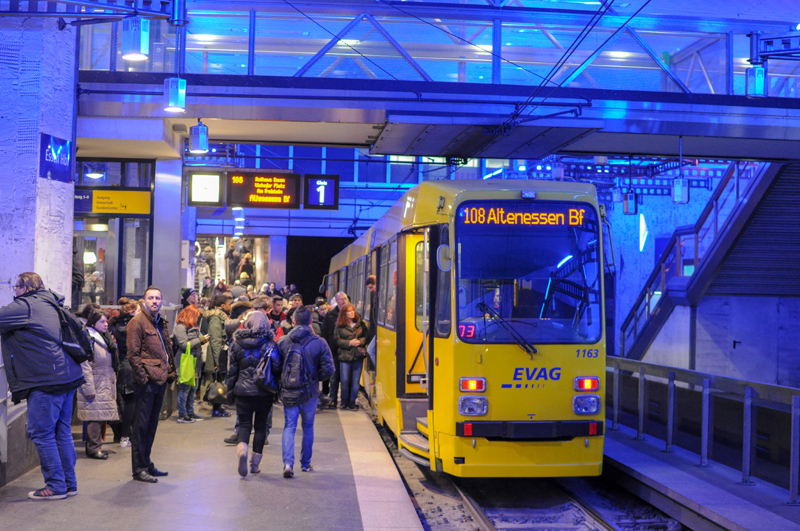 An M-type tram at Essen Hauptbahnhof, 2017

In total, 380 M/N types were constructed for 11 West German cities, over a period of 15 years. Small orders were also purchased by cities in Switzerland and Austria. They represent one of the last mass-produced high-floor trams in Western Europe and a successful attempt to construct a standard vehicle to meet changing transportation needs. As West German cities have continued to invest in low-floor trams since the 1990s, many have been retired and sold to cities in Eastern Europe, particularly Poland. 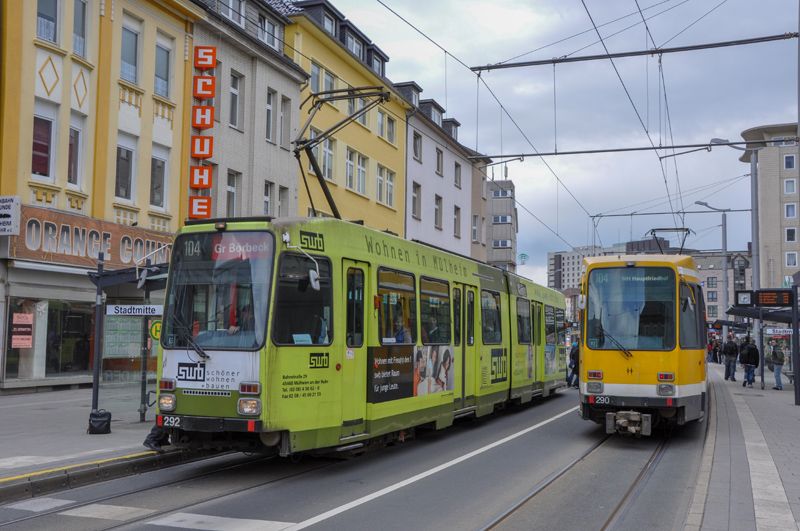 Unlike in West Germany, the three Dutch tram cities (Amsterdam, Rotterdam, The Hague) could not agree on the specifications for a standard tram, so each city developed their own vehicles to meet their specific needs and budgets. In Rotterdam, the early 1980s saw the introduction of the ZGT (Zwerfend Geleed Tram, or Wandering/Floating Articulated Tram). It was an attempt to save money by building a vehicle that was as long as a 3-section, double articulated tram, but contained only two sections. This was done by placing the second truck under the end of the first section, rather than under the articulation joint (as with Toronto’s ALRVs), which enabled each section to be longer. To go around corners, the front and rear were tapered, giving them a distinct appearance. 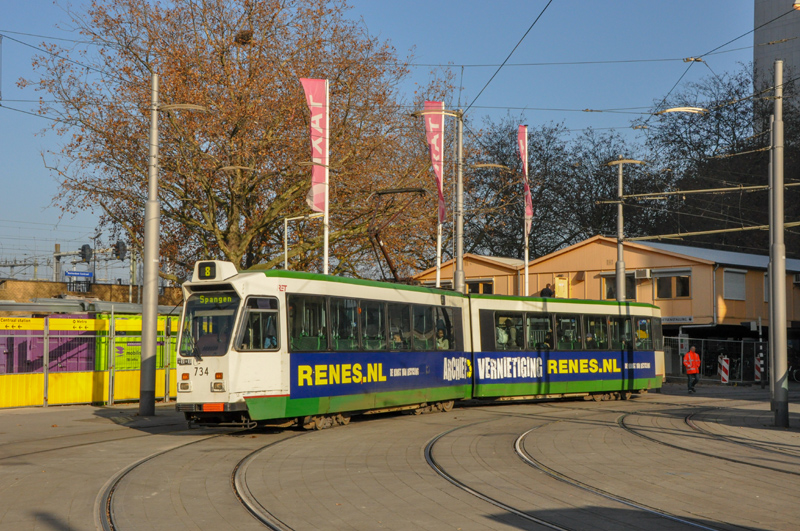 100 ZGTs formed the backbone of the Rotterdam tram fleet until low floor vehicles were introduced in 2003. All have been retired from service, though 6 have been preserved by the city’s transit museum, Romeo, and 25 now run in Galati, Romania. Like many of the last generation high-floor trams, it was not their reliability or comfort that led to their end, but rather changing preferences towards low-floor, accessible vehicles.

In North America, we tend to think of the failures of the Boeing LRVs in terms of new streetcars in the late 1970s and early 1980s. However, this is the exception, rather than the rule. Most of the streetcars, trolleys, LRVs and trams constructed in this era were well-built, reliable and improved upon existing technology to meet changing transportation needs. Many were retired (or sold) earlier than initially planned, however, because of gradual transition towards low-floor vehicles. The first low-floor tram debuted in Geneva in 1984, three years after the last CLRVs entered service. Some last-generation high-floor trams were rebuilt to lower part of the floor, though these are often cumbersome and cramped spaces (see Zurich, below). The norm, however, has been to order new low-floor trams, rather than modify existing high-floor ones.

While new North American LRT systems were slower to adopt low-floor technology than their European counterparts, this development would ultimately spell the end for the CLRVs, and many of their counterparts around the world. However, in most cities, they helped to upgrade their urban rail networks and were instrumental in the development of the modern, light rail systems that we know today.

Below is a brief gallery of some other streetcars that were developed in the late 1970s and early 1980s: 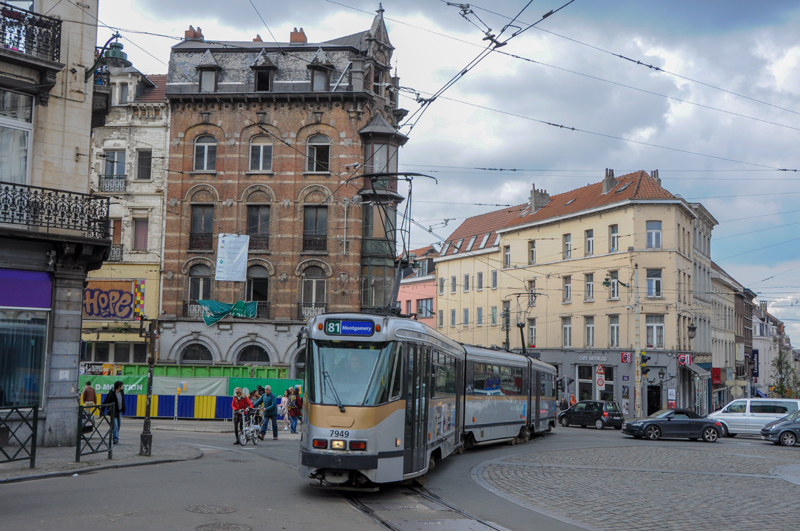 Brussels continued to use PCC technology for their 61 double articulated trams built in 1977; they will be replaced when new Flexity vehicles start arriving in 2020. 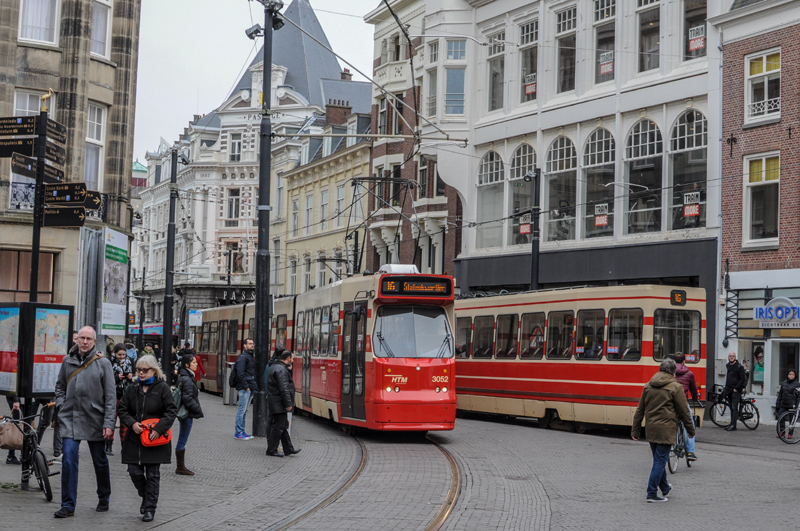 The Hague also used PCC technology on their 100 trams delivered between 1981 – 84 (with a further 47 ordered in the early 1990s). They are gradually being replaced by low-floor trams. 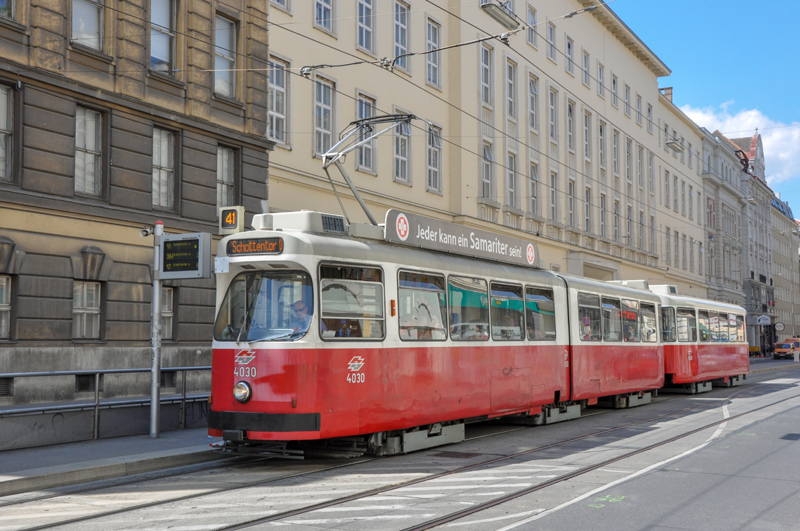 Vienna has a similar paint scheme to Toronto and first of these E2 trams began arriving in the Austrian capital in 1977. They are still in regular service today. 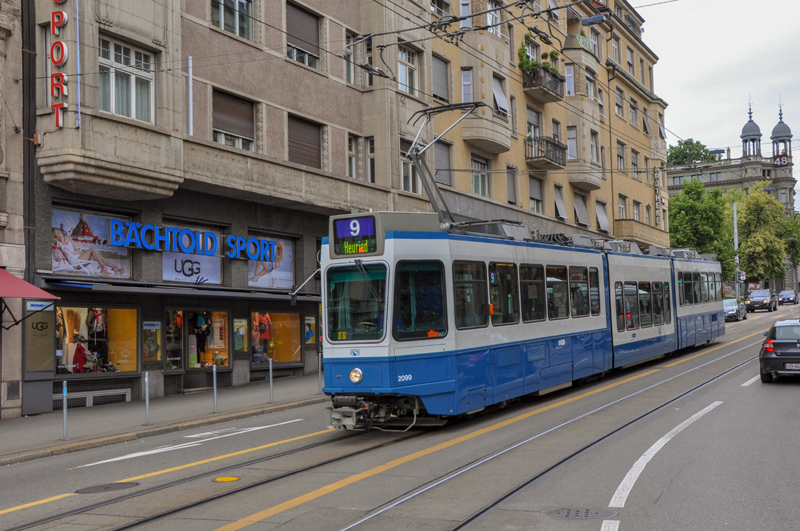 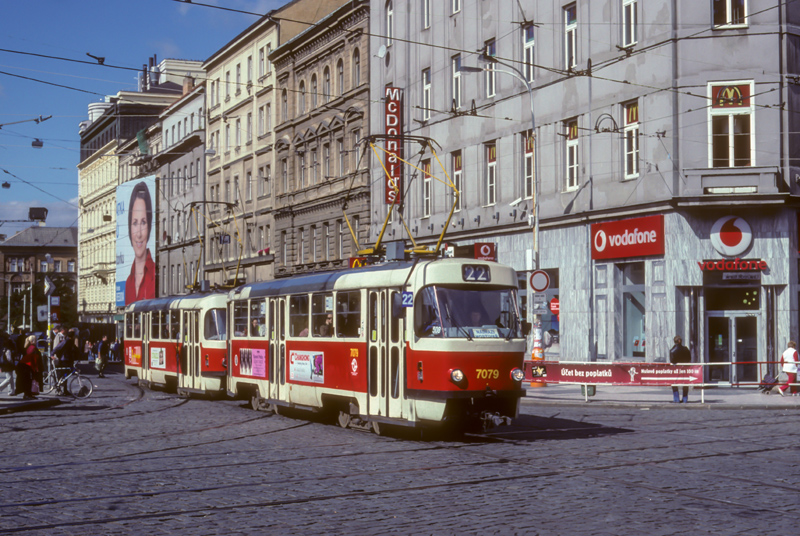 The major tram manufacturer in Eastern Europe was CKD Tatra of Czechoslovakia. Almost 14,000 T3 models were constructed between 1962 – 1997, including over 1,000 for Prague, pictured here. 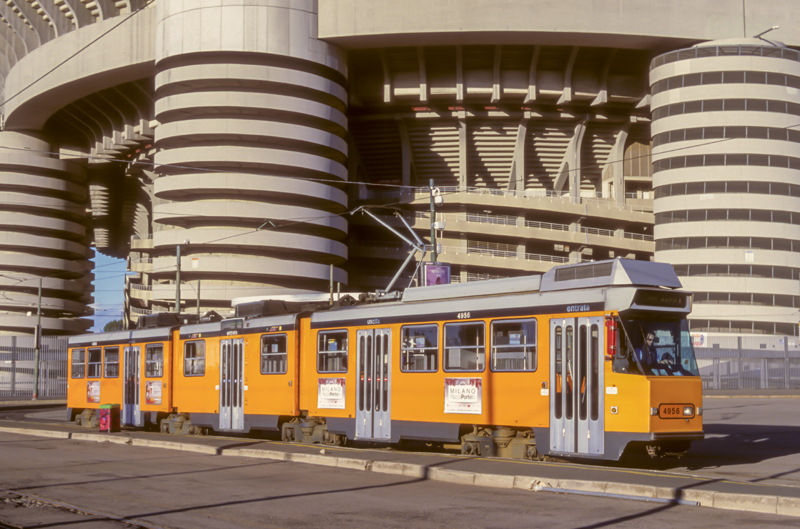 100 ‘Jumbo’ trams were constructed for Milan between 1977 – 1979 for light rail lines that never materialized. They remain in service on regular tram routes including the line to the San Siro football stadium (pictured) 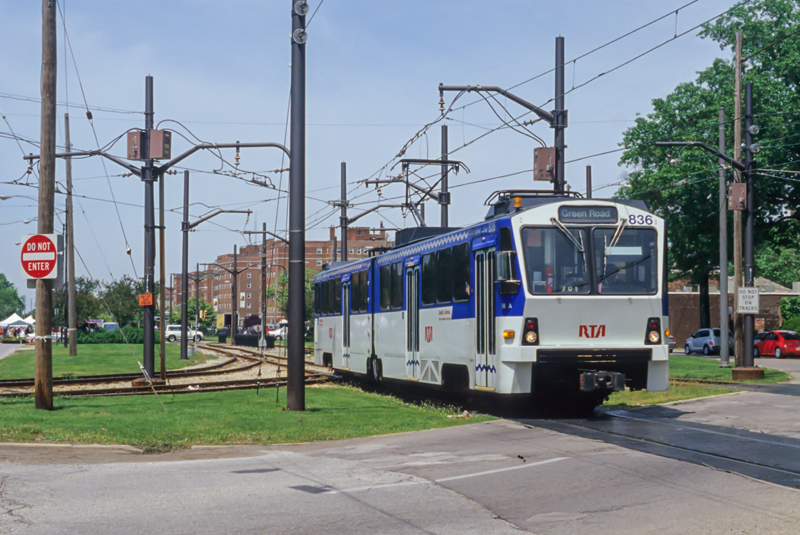 Cleveland modernized its suburban lines to Shaker Heights with 34 Italian-built LRVs in the early 1980s. They remain in service today. 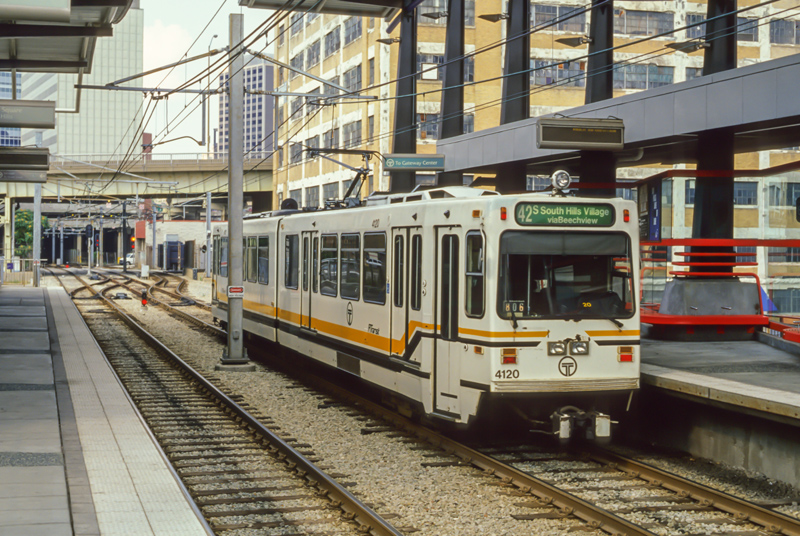 Many North American cities bought LRVs from Siemens-Düwag of Germany in the late 1970s and early 1980s, including Pittsburgh (pictured), San Diego, Calgary, Edmonton, St. Louis and Sacramento. These highly successful vehicles were based on a design for Frankfurt, Germany, first developed in the late 1960s (below); all of them have now been retired. 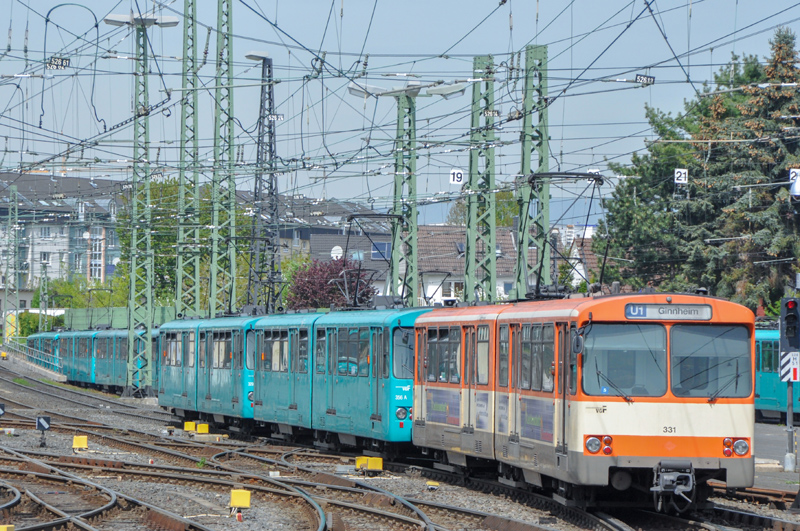 All photos by Brian Doucet, unless otherwise stated.

Brian Doucet is the Canada Research Chair in Cities at the University of Waterloo’s School of Planning. Originally from Toronto, he lived in the Netherlands between 2004 – 2017. www.briandoucet.com Twitter: @bmdoucet