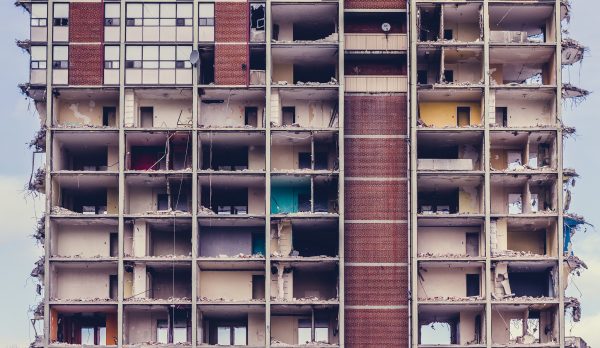 Whatever else you might think about Sidewalk Labs (SWL), the controversial smart city proposal has made one undeniably positive contribution to Toronto’s civic discourse: it forced a discussion about sustainable construction materials out of the architecture journals and into the political mainstream.

By now, everyone who is paying even a little attention to Quayside knows that SWL wants to construct tall buildings out of engineered wood products, like cross-laminated timber beams. With Waterfront Toronto’s blessing, the company is using its heft to push for Ontario Building Code (OBC) changes that would allow these materials in structures that rise beyond six storeys.

Sidewalk’s ambitions slyly interrogate Toronto’s business-as-usual approach to development, which is that tall buildings must be fabricated primarily out of two of the world’s most carbon-intensive materials: steel and concrete/cement.

It’s a largely unchallenged notion, as anyone who’s watched a local construction site can attest. Some building materials researchers have identified ways of making less carbon-intensive concrete, and some versions are now available commercially. But the fact is that in a high-growth city like Toronto, council’s feel-good climate change plans and resolutions do little to counter the reality that much of what we build relies on materials that generate huge quantities of carbon emissions. Cement, an ingredient of concrete, accounts for a stunning 11% of all carbon emissions globally, reports BNN Bloomberg.

Given that earthlings have about a decade to bend the emissions curve, the takeaway is, or should be, clear: local governments need to begin thinking much more critically about concrete and steel, as well as sustainable substitutes like tall timber, as we create the low-carbon city of the future. (The City of Toronto has pledged 65% greenhouse gas emissions by 2030, based on 1990 levels.)

The Globe and Mail’s architecture critic Alex Bozikovic made this point in his weekend column – “By wrecking tall buildings, are we contributing to the climate crisis?” – in which he calls out a developer that plans to demolish the hefty and fairly new Delta-Chelsea Hotel in favour of three new super-tall towers.

Drew Adams, of LGA Architectural Partners, expanded on the argument in an interview with Corporate Knights. He argues, convincingly, that if the city wants to step up its climate strategy, the short-term focus should be on reducing embodied carbon – i.e., carbon-intensive building materials – because preventing those construction-related emissions in the near future is as important as off-setting those related to operations (heating, cooling, etc.) over the long haul.

But if you think that any of these insights find policy expression in the city’s TransformTO climate plan, or even its new Green Standard, you’ll be disappointed (although perhaps not surprised). TransformTO is almost entirely silent on the subject of carbon intensive building materials. And emissions targets for buildings — the 2030 goal is that “all new buildings will be built to produce near-zero greenhouse gas (GHG) emissions — focus on their operations and systems, not on the materials used to construct them.

A TransformTO reference panel this year identified the importance of developing a program to reduce life-cycle greenhouse gas emissions from buildings and infrastructure (page 44), which flicks at the issue of finding lower-carbon alternative materials to conventional asphalt, steel and concrete. And in the past two years, council has toughened up the Toronto Green Standard, which provides more ambitious benchmarks and incentives for developers willing to construct low-emission buildings.

But, as the city’s own assessment shows, even the latest versions of the Green Standard don’t compel developers to conduct “whole building” lifecycle assessments, which capture all the embodied carbon in materials like steel, concrete and drywall. (The Zero Carbon Building standard, developed by the Canada Green Building Council, does require this kind of evaluation in its certification process.)

In short, there’s not much regulatory incentive for developers to use fewer carbon intensive products, from low-carbon concrete to tall timber, especially in the short term, when such decisions would have the greatest impact, both in terms of emissions levels but also in the creation of new markets for materials that either sequester carbon (engineered timber) or just use less of it.

Given the amount of concrete, steel and asphalt the city uses directly (for infrastructure) or indirectly (by permitting new buildings), there’s no question city council needs to up its game in this domain by pulling policy levers that currently make no appearance in either TransformTO or the latest budget (which proposes to boost climate-related spending by the princely sum of $5.9 million for 2020).

Here’s one suggestion: why not provide discounts/rebates on development charges for builders that use low-carbon building materials in their projects, with a stepped rebate structure based on the types of low-carbon substitutes?

Toronto council, in general, doesn’t use its taxes or fees to drive specific policy goals. The city’s reluctance is likely related to chronic underfunding – no one should be surprised if city budget officials balk at the prospect of providing rebates when they never have enough funding to keep the place operating properly in the first place.

Yet at both the federal level and in other municipalities, there are examples of how fiscal incentives are deployed as an alternative to program spending in order to produce a desired outcome. For many years, for instance, Ottawa has encouraged corporate investment in research and development with the use of scientific research and experimental development (SR&ED) tax credits, i.e., foregoing billions in revenue in the service of a larger policy objective — modernizing the Canadian economy and boosting productivity).

Justin Trudeau’s Liberals have also announced that they’ll be providing 50% corporate tax credits to companies that develop net zero emissions technologies – again, a hit on general revenues as a trade off for furthering Ottawa’s green plan.

And in the City of Vancouver, developers that build certified passive house projects, which feature extremely robust insulation, thicker walls and energy recovery systems, qualify for additional density, a cash bonus in another guise.

With an estimated $500 million to $540 million of annual revenue projected from the new development charges bylaw, it seems reasonable to ask whether this revenue stream, which funds a range of infrastructure investments, might be pressed into service to kick-start the use of lower-carbon materials.

Certainly, the city would need to find alternative revenues to pay for the water mains, transit projects and other outlays supported by DCs. And any incentive would have to be designed in such a way that developers also have ready and economical access to these lower-carbon materials.

Despite those caveats, it seems to me that council should begin thinking more proactively about using these kind of incentives as opposed to the more conventional approaches to carbon reduction, which involve either voluntary design standards, small grants or other measures (EV plug-ins) that nibble at the edges of a much larger problem.

City council last year declared a climate emergency. The Intergovernmental Panel on Climate Change has told all of us to think very hard about 2030 and that 1.5 degree threshold. Tall timber buildings on the waterfront are a good start, but we’ll need to do much more to change the way we build towers, bridges and roads if we hope to achieve meaningful reductions in Toronto’s true emissions over the next decade.