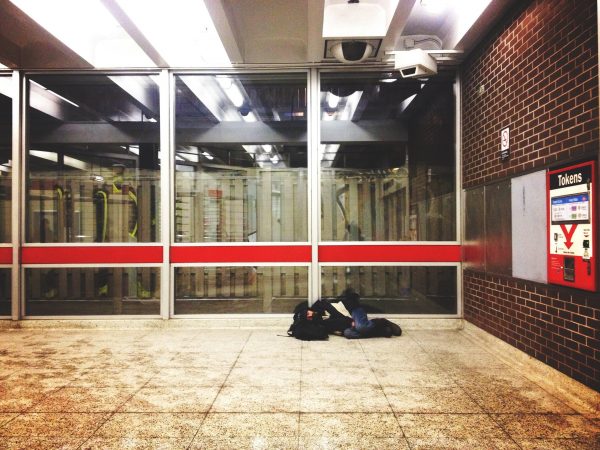 In order to flatten the COVID-19 curve, Canadians have been advised to stay home as much as possible and, when going out, to engage in social distancing. That advice is obviously impossible for Toronto’s homeless population to follow, especially those staying in the overcrowded shelter system.

Between April 7 and April 14, according to the City’s Shelter, Support and Housing Administration (SSHA) and the Medical Officer of Health, the number of people living in Toronto shelters with COVID-19 grew from 6 to 30, with a dozen shelter workers also infected. The City said yesterday it has also transferred 176 shelter clients for testing and isolation.

George Citroner reports on medicine and health for the U.S. based online magazine, Healthline. In a recent article, he estimates that for every reported case, ten more go unreported. So the actual number of infected homeless shelter residents could exceed 300 people.

One would think then that an emergency housing strategy of some sort would also be an important part of Toronto’s overall approach to mitigating the spread of the Novel Coronavirus among homeless Torontonians. According to the SSHA, the agency “is working with Toronto Community Housing (TCH) on the Rapid Housing Access Initiative to identify vacancies that can be made available immediately to people currently in the shelter system.” The SSHA also states that “these TCH units will be prioritized to those particularly vulnerable COVID-19, particularly seniors,” who constitute roughly 12% of the homeless population.

Given the rate that infectious diseases spread in the overcrowded shelter system, the other 88% is also particularly vulnerable. According to veteran homeless activist Beric German, “Shelters are not unlike the petri dish that we understand cruise ships to be except shelters are more overcrowded, have even worse ventilation, power staffing levels and cleaning standards.”

A report published by the Homeless Hub, supports Beric German’s observations: “People experiencing homelessness are at an increased vulnerability of being exposed to and/or contracting various infectious diseases…because of difficulties related to their experiences of homelessness including: maintaining personal hygiene, obtaining adequate nutrition, staying in crowded and poorly ventilated environments…”.

If Crowe and other experts are right, we should expect to a spike in infection rates among the homeless as well. As the Toronto Star’s Jennifer Pagliaro reported, modelling suggests that as many as 800 to 1,200 homeless Torontonians could become infected with COVID-19. Vulnerable populations also see a far higher number of critical cases, with mortality rates as high as 49%.

Unlike long term care residents, shelter clients are generally required to leave between 8 a.m. and 4 p.m. every day, and are consequently more apt to become vectors for the spread of COVID-19. The closing of coffee shops, fast food restaurants and public libraries will likely mitigate that potential, as it reduces contact between them and the general public. However, it also means they have virtually nowhere to go during the day. More problematically, in terms of public health, it also means they do not have access to public washrooms.

In other words, the homeless face shelter overcrowding on one hand and a lack of access to proper washroom facilities on the other. As Dr Jaspreet Khangara (et al) asserts in a recent CBC opinion piece on the potential for a widespread COVID-19 infection among the homeless population, “around the world, these are the kinds of conditions that fuel exponential disease spread.”.

So what’s the City’s solution? Apart from installing portable toilets and hand washing stations in some of Toronto’s public parks, the SSHA says it has secured 1,200 hotel rooms that are ready to be mobilized at several (undisclosed) locations, two of which are already in use in accommodating 313 clients to date.

The SSHA further states that it is working actively with its hotel capacity to provide physical distancing from the current shelter system. SSHA also says it is “working with Inner City Health Associates and partners to identify those at greatest risk to move first.” “With the help of the City’s Emergency Operations Centre, SSHA has opened ten new facilities since March 16, “eight [of which] with approximately 350 new spaces to create more opportunity for physical distancing from shelters, 24-respites and 24 hour drop-ins.”

According to some estimates, a person infected with COVID-19 can be asymptomatic for several days, so screening shelter clients for symptoms of COVID-19 is likely not a reliable way to mitigate the spread of the virus. Without actually testing shelter residents before moving them, screening alone may serve to spread the virus further.

Housing is obviously a far better solution. There are, in fact, housing options available. In a previous column for Spacing, I reported on Toronto Auditor General (AG) Beverly Romeo-Beehler’s June 2019 audit on Rent Geared to Income (RGI) housing. Given current vacancies in the “entire social housing system,” she observed, “it is likely that subsidized housing could be provided to at least 2,200 more people.” Romeo-Beehler also noted that the over 2,000 homeless applicants on the subsidized housing waiting lists had not been prioritized.

Have any of those 2,200 available housing placements been filled yet? “As of April 7,” says an SSHA spokesperson, “several shelter clients have been moved into permanent RGI housing. [S]everal more are scheduled to move in and additional unit units have been identified.”

That is likely far too little and far too late for those 2,000 homeless applicants. They not only have been unnecessarily trapped in the shelter system for years, but now have to live in overcrowded conditions during a pandemic during which social distancing and proper hygiene are virtually impossible to maintain.

As United Nations Special Rapporteur Leilani Farha recently observed, “housing has become the front line defense against the novel coronavirus.” “Home,” she added, “has rarely been more of a life or death situation.”

Will the COVID-19 pandemic serve as a wake up call for Toronto to finally take meaningful action on housing and homelessness? We’ll see. But in the meantime, it’s no exaggeration to say that the very lives of some homeless Torontonians hang in the balance.

John Clapp reports on affordable housing and homelessness for Spacing.ca and Toronto Storeys and is a contributor to House Divided (Coach House Books, 2019). He wrote about being homeless in this city last July for Toronto Life.