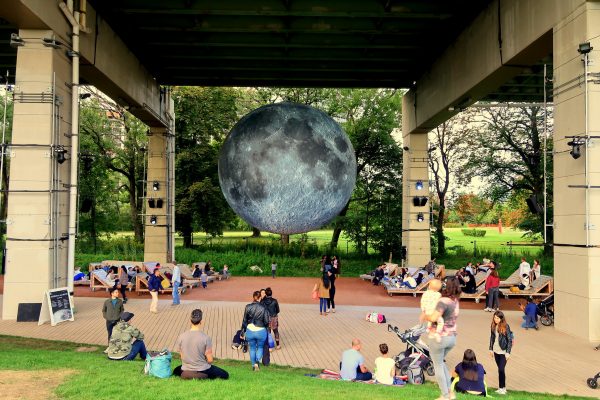 This article is co-written by Ilana Altman and Dave Carey

There is something unsettling about a quiet city.

The empty streets, squares, and taped-off playgrounds that were full and vibrant only a few months ago now sit silent, stirring a seemingly endless series of questions about our recovery.

At The Bentway, Toronto’s urban park built under an active downtown expressway, ambitious plans for Spring programming have been temporarily shelved. Elbow-to-elbow ice skaters have been replaced by lone joggers and occasional dog walkers. The park, surrounded by high density towers, pulses with the promise of freedom and escape, but remains responsibly tranquil. Even the gentle hum of the highway above has slowed and softened. 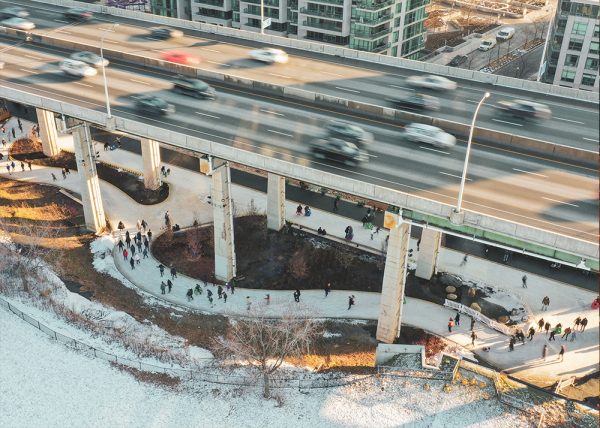 Like The High Line in New York (and as the sole Canadian member of The High Line Network), The Bentway was founded on a public-private partnership that sees the site operated, developed, and animated by an independent not-for-profit. For organizations like ours, public space is a passion and a set of principles, of course, but also a profession and an everyday reality.

This disease is challenging the very value system and best practices that have guided our work for so long. Though time moves slowly these days, the vocabulary we have developed to respond to the COVID-19 crisis is changing rapidly. We are no longer discussing days, but months and years. We are no longer planning for a “return to normal” but are rather scrambling to predict the “next normal”.

What does shared space look like in the post COVID-19 city? What role will public space play in the next normal? These are the fundamental questions at play.

Here in Toronto, parks and public spaces have remained accessible, though the City has closed park amenities like playgrounds, picnic tables, and skateboard parks. Police and bylaw officers are now on patrol to enforce physical distancing, with reports of hefty fines issued for lingering on benches “beyond necessary resting purposes.”

Reasonable arguments can be made to justify severe restrictions in these troubled days but as the city prepares to reopen these spaces one must ask, what comes next? Amid the myriad of speculations are loud and familiar calls for more restrictive public infrastructure. A culture of fear produces well-intentioned features like contactless pathways, barriers to entry, reactive architecture and other moves away from open congestible space.

This is neither the first nor the last time that designers will be asked to generate defensive strategies for public space. The 1970s saw a wave of built space practices aimed at deterring vagrancy, reducing crime, and minimizing other high risk activity. Spiked gates, short benches, and studded surfaces became common tools employed in the service of so-called public safety. While these strategies were not visually disruptive, they shrewdly defined a ‘right way’ and a ‘wrong way’ to engage and exist within public space, and, moreover, produced a ‘right user’ and a ‘wrong user.’ Ultimately, defensive design practices targeted (and still target) the city’s most vulnerable individuals, who rely on and benefit from public space heavily. These include seniors, lower-income individuals, racialized people, people with disabilities, and un-housed people. 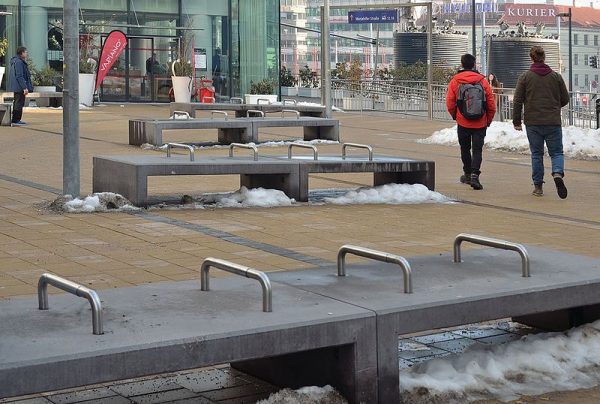 One group that was singled-out directly by these tactics was the skateboarding community, whose members had found new ways to incorporate urban furniture and concrete landscapes into their explorations of the city. Metal knobs and abrasive edges, were aimed at curbing this unanticipated activity. They served as subtle but clear signs of what had been deemed tolerable behaviour in communal areas.

In 2018, The Bentway aimed to reframe this seemingly ‘unwanted’ practice and its negative connotations by working directly with the skateboarding community on the development of public space strategies and a pop-up park. That summer, we were introduced to a responsible and respectful family of boarders who cared for The Bentway space because they knew they were welcome. The temporary ramps have since moved elsewhere, but the skaters remain and continue to safeguard a space in which they are invested. 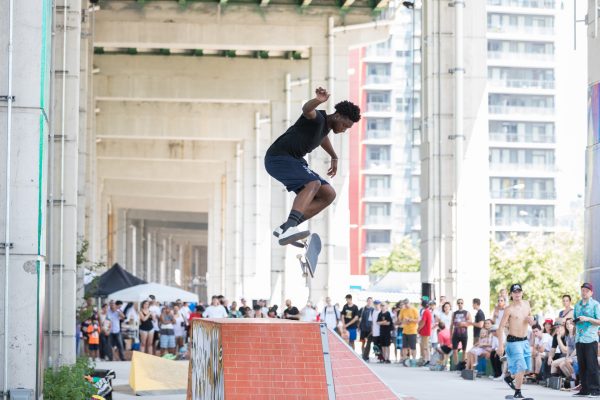 In recent years, designers and city-builders have largely come to reject defensive strategies and the exclusionary policies from which they stemmed. Great public spaces are now built with flexibility and approachability in mind, offering ample amenities and public resources.

Yet, even in the best of times, the creation and operation of public parks, squares and community hubs remains both an honourable and difficult pursuit. The Bentway team encounters and struggles with the challenges of running an open space daily and in real time, but we have made the choice to learn from the communities that use our space rather than make decisions for them.

Spaces without walls and doors, that are open to all, are successful because of their mixed use and mixed audiences – their lack of predictability and control. They are places that belong to everyone, irrespective of socio-economic and cultural divides. They rely on a strong social contract – the same social contract that this crisis has brought to the forefront.

Public spaces and community hubs depend on trust that the members of the communities they serve will care for and respect the property, the programs and, most importantly, their fellow users.

COVID-19 has demonstrated, at a global scale, that we are willing to make enormous sacrifices for our neighbours. It has demonstrated the importance of creating inclusive cities that are shaped by love rather than fear.

However, the true test of our resolve is yet to come. As we plan for the next normal, we must ensure that the design decisions that shape the next generation of public spaces are not simply reactive but also responsive in the most equitable way. This goal will require more expansive and integrated design teams, including public health officers, experts in social services, and community leaders among architects and engineers. It will require flexible strategies that are anchored by preparedness plans. It will also require a careful consideration of the past mistakes we made in the interest of public safety.

Even as the city reopens we must continue physical distancing, to protect our neighbours and do our part to end this crisis. Yet, if one thing is clear in this time of uncertainty, it’s that we won’t find the answers we seek behind closed doors. When our cities re-open, we will need public space more than ever. We will need places where city-dwellers can seek reprieve, find hope in one another, heal together and redefine the next normal collectively. 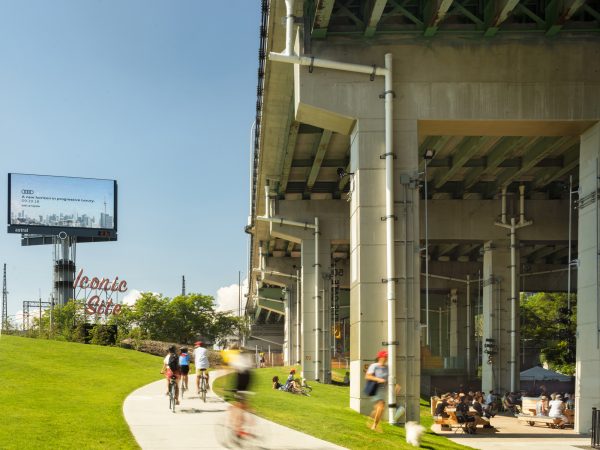 Before this crisis, we had already seen a significant shift in cultural production and consumption patterns. Artists, designers, educators and the public alike were increasingly interested in direct engagement with the city and were not afraid to confront urban challenges head on. Our public spaces had emerged as more than simply backyard parks but vital cultural, educational and recreational hubs where we could come together to learn and share.

Over the last two years, The Bentway has sought to find ways to celebrate city life, to create unforgettable civic experiences and to convene community discussions about the future of our city, and cities everywhere. We have worked with creative partners to tackle issues such as climate change, mental health, lost histories and industrial reuse. We’ve collaborated with and learned surprising lessons from skateboarders, artists, break dancers, environmentalists, historians, and poets. We have seen the power of public space first-hand and its ability to create new community connections.

COVID-19 has challenged this model of programming and civic life. It will take some time for us to find our bearings once the city reopens.

As we work together to redefine our expectations and experience of public space, set new comfort levels and discover new ways of coming together, we must also re-evaluate what success looks like. For too long, we have relied almost exclusively on measurables: attendance counts, demographics, eyeballs, tags, likes, etc. However, hard data has only ever been a small part of the real story. The next normal will see an even greater reliance on qualitative metrics — the intangible community and creative benefits that aren’t reliant on huge crowds, but instead are characterized by more intimate, meaningful interactions with our neighbours that help us to see the city and each other anew. Public space operators must align our future goals with those of a healthy city, considering all the factors that contribute to wellness.

There is no doubt that change is coming. The post COVID-19 city looks different from what we knew before; and public space is no exception. However, if we continue to uphold our social contract to each other and prioritize equitable design strategies, we will adapt and emerge even stronger than before. Public space has always been important because it belongs to all. This is a principle worth fighting to preserve.

Ilana Altman and Dave Carey are the co-executive directors of The Bentway. Follow Bentway news on twitter at @thebentway.