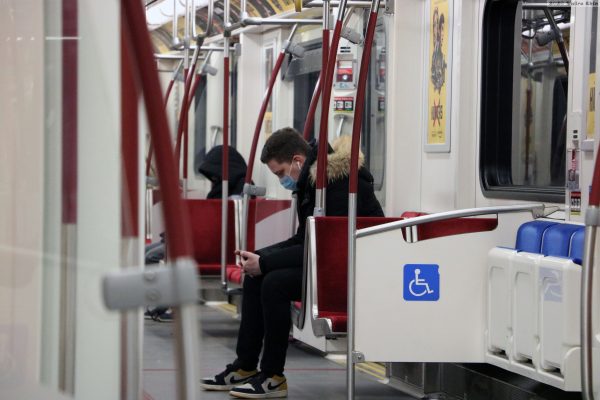 The job losses and damage to many retail businesses from the COVID-19 pandemic and related mobility restrictions mean that Toronto and other cities face a steep climb to economic recovery when things finally get back to normal. Major funding for public transit agencies is a necessary part of any recovery plan. We will not make a good recovery if we don’t restore and improve public transit service.

This imperative is not merely a technical concern about how to make transit safe. It is a political issue that requires leadership and an appropriate budget for excellent transit service.

A recent survey of 2,753 transit users by researchers at the University of Toronto found that 25% of those who have stopped taking transit since the pandemic began said they would choose another form of transportation until there is a vaccine.

This result appears to be due to a fear that transit is a space in which there is a real risk of contracting the disease. More than seven in ten of those surveyed favoured mandatory mask-wearing on transit. People are also concerned about riding on crowded vehicles.

Our first priority in making public transit safe in a pandemic should be those facing the highest risk, which are transit workers, not riders. As we look around the world, there are multiple stories of transit workers, especially bus drivers, who have become ill and even died from COVID-19.

Because drivers are the folks that riders most often come into contact with and talk to, they are exposed every day to thousands of people who may, in turn, be exposed in their workplaces to people outside their household. Protections for TTC drivers, such as rear-door boarding and plexi-glass enclosures, appear to have prevented the higher numbers of illnesses we’ve seen in places like London and New York.

Ridership on the TTC has fallen 85% since March. Those still riding transit regularly have no choice but to keep going to work. These are the often-low-paid essential workers who keep our city running, and enable the rest of us to stay well and stay home.

There are no stories that I can find anywhere that indicate that public transit is a place of contagion among riders or that its surfaces are a vector. We even know of specific instances where ill people took public transit, but no infection of anyone else was found.

Instead, we have lots of evidence of public transportation safely operating with even high levels of ridership. The TTC says it can operate safely at 30% of regular ridership levels. That is an oddly low ceiling, and is an indicator of inadequate service provision.

At its lowest point (the first week of March), the Seoul Metro was carrying 60% of its January (pre-COVID-19) ridership. The city of Daegu, which is about the size of Toronto and had far more COVID-19 cases than Seoul, saw its subway ridership decline by about half at the peak of the crisis. The city brought the disease under control quickly while people still rode transit.

Seoul Metro hired more than 100 new cleaners, who are constantly spraying the stations and wiping down common touch-points, such as ticket machines and turnstiles, four to five times a day. The city government does extensive contract tracing and publishes the “travel journals” of every confirmed case. Despite clusters among workers who use transit, no case has been linked to transit use in South Korea.

The risk to riders is low, but transit agencies must keep their vehicles and stations safe and clean, and be highly transparent about those efforts so that riders and workers are reassured. In the Seoul Metro, workers wear bright yellow vests that say they are Covid Cleaners.

The TTC has already taken several steps. In an update released May 20, 2020, the agency advised that hand sanitizer is available in all subways stations and face covering is “strongly recommended.” Vehicles are disinfected twice a day. There is increased service on some of the busiest routes to reduce crowding.

It is less than other cities are doing, but it’s a start. Sanitizer needs to be on every bus and streetcar too, and masks should be required on all public transit vehicles, as they already are in New York, Washington DC, Los Angeles, Seoul, Tokyo, Singapore and many others. Following the example of other cities, we can lower windows in buses to maximize air ventilation, and increase fresh-air circulation in stations by doing things like keeping the doors open.

There should also be a new policy of no unnecessary talking. This also means absolutely no singing–sorry, buskers. While we should avoid sardine conditions, other cities’ transit authorities are safely managing more people riding together by requiring passengers to wear masks and keep quiet.

We will need to increase service above pre-COVID-19 levels to avoid overcrowded vehicles. In addition to extra vehicles on busy bus and streetcar routes, the TTC should consider running additional bus service along subway lines to reduce pressure there.

TTC workers are not the only ones with a role to play here. City leaders must step up. The message needs to go out, loud and clear and backed by action, that transit is safe.

Vague messages of “make your own choices,” like we have heard from New York City Mayor Bill de Blasio, are not good enough. The CDC—shame on them—is advocating a return to private automobiles.

Leaders need be proactive and encourage people to take transit. They need to be its champions and ride regularly. We need to do better than “get back to normal.” When we are on the other side of this pandemic, we must aim for higher ridership than pre-pandemic numbers, with additional service where it is needed to provide more frequent service and to prevent crowding.

Mobility makes an urban economy run. Without public transit, the city will come to a halt and struggle to recover economically. Improved transit improves economic participation, particularly at lower incomes. It has become much more obvious with the pandemic that the jobs many people devalue as “low-skilled” are anything but. They are essential to the daily functioning of the city.

Cities will not recover without moving millions of people every day. With a need for social distancing, space is more precious than ever. We cannot afford to continue to accommodate inefficient private or even shared automobile use. In addition to investments in public transit, we need to greatly expand the space for safe cycling and pedestrians of all ages and abilities.

All these efforts will cost money. There are also additional financial holes to fill for agencies that have taken a major revenue hit because of ridership drop. Toronto has been affected possibly worst of all, with 70% of its revenue coming from the farebox, but other cities depend on fares as well.

We need to fill the holes, add the service and cleaning supports, and then restructure the funding model so that, in the future, public transit is less vulnerable to changes in ridership. Public transit is an essential service for a functioning city and it needs to be supported as such.

These are not dollar figures that municipalities can manage on their own. It is (long past) time for the province to step up with serious funding for public transit–and probably the federal government, too.

We really have no choice here. Every major city gives more in tax dollars and wealth generation to its region and province than it gets back. If the urban economy stalls, everyone will feel it. We must invest in public transit if we want the city to recover.