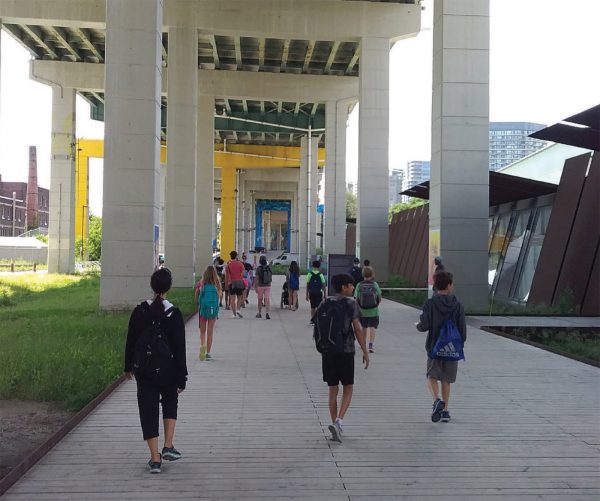 Sometime in the last decade, coding became the must-learn, must-teach skill in the education and training world. Everyone from ambitious middle schoolers to reskilling professionals needed to learn to code for cultivating problem solving and getting a leg up on 21st-century jobs. Well-funded government programs and coding camps abounded. Earlier this year, I found a book in my toddler’s daycare library called Baby Loves Coding!

Now, among all the predictions about the future of cities in a post pandemic world, I’d like to make a plea: let’s make civic skills the new coding. As physical distancing measures loosen and society reanimates, everyone should be upskilling their civic toolkit because they are going to need it constantly in a newly hyper-localized world with fresh threats and growing uncertainty. Along with the cities we need, let’s talk about the citizens we need in those cities, and rethink what it will mean to be an urban-dweller after COVID-19.

COVID-19 has transformed what it means to live in cities. While its long-tail effects on urban life are largely uncertain, one thing is clear in the short term: navigating the local community will be different and more consequential. As our social physics get redrawn into tighter and less random patterns, our daily hyper local interactions will become more frequent and fraught. The trip to the store, the walk to the park, the visit to the recreation centre, will all come with a new set of written and unwritten rules. How these rules get codified and respected is partly up to governments, and partly up to us as urban citizens. How much advocacy, engagement and civic sweat equity we are willing to invest?

And what will happen to our relationship with the people and places beyond our narrowing geographic range, in the neighbourhoods we rarely visited even before a pandemic locked us down in our own? At a time when we all need urban empathy and a shared sense of civic duty, localization may have a dangerous solipsistic effect without the added, purposeful work of rebuilding the connective tissue that binds us together across differences in the places where we live.

The more immediate question may be, how much inside and outside space are we willing to share within 20-minute neighbourhoods? Can a series of smaller, decentralized shared spaces and experiences replace the downtowns, the restaurant rows, the cultural districts, the big institutions, the office parks and campuses? In one San Francisco neighbourhood, super blocks of solidarity and shared activities have formed as an antidote to the isolation of the lockdown, with residents vowing to carry forward their new found civic sense in post pandemic times.

Civic skills are a big bucket—a broad, multidisciplinary group of hard and soft competencies. Their knock is that they can seem intangible at the best of times, and inert in times of crisis when concrete action and solutions are required. But it is civic skills that are being deployed across the United States and around the world this week as thousands take to the streets to confront a racial emergency. Real change and real togetherness cannot take place without civic skills being enacted.

When we teach these skills to kids at Maximum City, we put them under two categories: Making Connections and Making a Difference. Anything you do in your town or city that involves making a connection or making a difference engages a civic skill. These include data, design, advocacy, problem solving and collaboration skills. Sometimes — a lot of the time — teaching civic skills is first about observation and language: showing someone a new way of looking at the urban world right in front of them and giving them the vocabulary to talk about it. Coding and programming, in fact, are part of the broader suite of civic skills when applied to digital citizenship, like the Toronto high school student who is launching a mobile app that helps the visually impaired people navigate sidewalks.

Civic skills are not just for understanding how your local government works, or doesn’t work. They are the toolkit for many of the daily interactions that will intensify in the coming months. Civic skills are for knowing and getting around your city — by foot, by bike, by car and by public transport. They are for building trust and social cohesion — by supporting your neighbour who is a frontline worker or ordering from a local restaurant that is struggling. They are for understanding that good public assets come from good public processes. They are for accessing services and paying for them with tax dollars. They are for protecting your rights and privacy when governments or enterprise overreach. They are for protesting and making your voice heard.

Civic skills help us advocate for and collaborate on solutions for the problems big and small that we bump up against everyday — sidewalks that are too narrow for physical distancing, parks and streets that should be opened up for broader public use, buses that are too crowded or infrequent, jobs that put workers at risk, housing that is insufficient and inequitable.
You don’t develop a sense of civic duty without actively engaging your civic skills. Use them regularly and like a muscle they grow stronger.

Several years ago, Spacing senior editor John Lorinc and I made a similar plea about revamping high school Civics classes in the Toronto Star: “Let’s reshape civics to focus on the communities and cities where our students live and learn, specifically, the municipal issues that make — or break — their neighbourhoods: transit, parks, community design, architecture, public spaces, streetscapes, cycling, walking, social inclusion and so on.” I’m happy to report that many Civics classes, and youth engagement in urban issues in general, have enriched considerably since that time. But there is still much work to be done making urban collectives out of individuals. COVID-19 was part of an unimagined future then but the vision still applies, more urgently now: develop civic skills in urban citizens who will in turn make great cities.

Josh Fullan is a teacher and founder of Maximum City, an education and engagement company in Torotno. Follow Josh on twitter at @joshfullan.