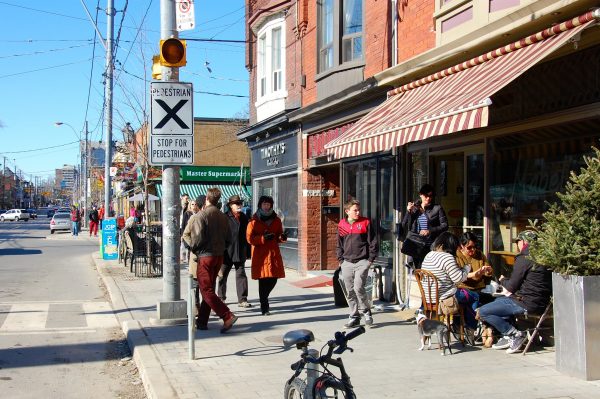 At its meeting Monday, the Toronto Preservation Board (TPB) voted to adopt a set of staff recommendations that seemed, to some observers as well as development industry insiders, like a classic example of bureaucratic overreach.

In a series of reports tabled at the board, Heritage Planning division officials recommended that almost a thousand older commercial/main street building be listed on the City’s Heritage Register as having cultural heritage value, even if each one is not, individually, historically or architecturally distinctive.

Most of these background buildings are along Queen West, Spadina Road, and the Danforth (between Coxwell and Victoria Park), in the King East/Adelaide corridor, and up Roncesvalles to Dundas West and north of Bloor.

The designation, according to the staff report, “[extends] interim protection from demolition, should a development or demolition application be submitted. Heritage Impact Assessments (HIA) are required for development applications that affect listed and designated properties.”

The act of listing, the document continues with studied neutrality, “provides an opportunity for City Council to determine whether the property warrants conservation through designation under the Ontario Heritage Act.” All but one of the board’s 12 members are citizen appointees, and the group includes several prominent architects.

These moves, which are unlikely to present intensification efforts with insurmountable headwinds, hint at the many circles the City needs to square over the next year-and-a-half, as planners slog through the immense task of updating the Official Plan so it conforms to new provincial land use rules.

The truly vexing problem here, in fact, is that City staff, and ultimately council, are confronted by the need to make choices, not between the right or wrong path, but rather among several competing urban goods: climate, housing, heritage, quality public space, to name a few.

The case of the future of Toronto’s workaday main streets vividly illustrates the dilemma. In his Globe and Mail column last week, architecture critic Alex Bozikovic correctly argues that the vast majority of these two-storey buildings are utterly unremarkable.

But there’s much to be said for the civic role these retail strips play in city life, from providing space for small and simply ordinary businesses (green grocers, dry cleaners, butchers) to offering pedestrian accessible amenities for nearby neighbourhoods, including vertical ones. They are also far more conducive to street life than the wind-swept canyons found in high-density corridors like Bay, ‘Downtown North York’ on Yonge Street, or Yonge and Eglinton.

At the same time, the City has appropriately identified some of these same main streets as targets for intensification that can sustain, and is sustained by, existing rapid transit. In other words, a big plus for the City’s longer-term climate strategy, especially given that new mid- and high-rise projects are being required to comply with Toronto’s increasingly stringent energy efficiency standards.

Indeed, all the areas that were proposed for the “batch” heritage lists by city officials are situated on either rapid transit corridors or streetcar lines that are themselves within easy access to subway stations. Not a coincidence, I suspect.

Along the same lines, the city, as part of its OP review, is trying to figure out how to comply with a new provincial land use designation known as the Major Transit Station Area (MTSA).

Under these rules, areas within a 500-metre radius of a subway, LRT or GO Train station need to be up-zoned or intensified to achieve minimum density targets (200 residents and jobs per hectare for subways; 160 residents and jobs per hectare for LRT; 150 residents and jobs for GO Transit rail). There are over 160 MTSAs within the city borders, and several overlap, either entirely or in part, with the main street corridors recommended for inclusion on the cultural heritage registry. According to an estimate generated by the Neptis Foundation, there are  24,000 residential homes situated within the MTSAs.

We’ve talked endlessly about the importance of transit oriented development (TOD) while at the same time refusing to approve density around transit stations, especially on the Bloor-Danforth line.

The province finally imposed TOD, and the City’s planning division has responded by mapping out a three-phase strategy, with an indeterminate time-frame, for implementing the MTSAs, starting first with stations in the downtown core, then moving east and west along Bloor Danforth and Spadina, and finally targeting the corridors along Finch West and Sheppard East.

The heritage listings that came before the TPB yesterday mainly fall within areas identified for phase two, which is off in the middle distance somewhere.

Besides the riddle of finding ways of reconciling all of these disparate planning goals within the context of the Official Plan, it’s also clear that the pandemic has significantly altered the calculus for both main streets and high-rise mixed-use development around transit nodes.

While I would predict that certain types of small main street businesses — especially in food services — will bounce back after the pandemic, many other forms of local retail will have either died during the shut downs or succeeded in surviving by pivoting to e-commerce — a trend that won’t go in reverse.

Similarly, the development industry will have to confront secular shifts in its own business model. Plunging rents, declining transit use, a comatose commercial leasing market, and the cratering of short-term rentals will take some of the energy out of the condo market, simply because the viability of those units as investment vehicles is not what it once was. Business, conference and academic-related travel won’t be coming back any time soon, if ever, which will also have an impact on the short-term rentals.

The other big imponderable is whether people (post-pandemic) are still willing to live in very tall buildings, given the experience of spending at least a year being cooped up in tiny condos and waiting endlessly for socially distanced elevators.

As the various branches of the City government ponder the future of Toronto’s main streets, the question I have is whether there’s some kind of compromise vision to be found amidst the economic wreckage inflicted by the pandemic.

Perhaps it’s a better and more street-friendly form of mid-rise development, or tactical upzonings within the residential side streets within MTSAs that will allow for more duplexes, triplexes and low-rise apartments. Alternatively, maybe the city should be doubling down on its efforts to decant some of that development pressure to publicly-owned sites, using the Housing Now ground-lease model.

The point is that when confronted with a decision between urban forms that each offer tangible benefits to the way the city functions, both in the present and in the future, Toronto’s planners should be looking for solutions that retain and combine the best elements of both. It doesn’t need to be a Solomon’s choice.

EDITOR’S NOTE: The upcoming issue of Spacing — which will arrive in subscriber’s mailbox before Christmas — tackles how the City of Toronto needs to respond to the changing nature of local main streets.