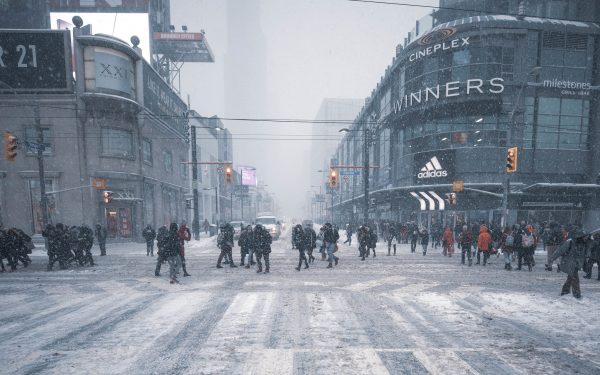 It sometimes seems as if the ‘whither-Yonge Street’ question has been loitering on the edges of our civic debates ever since the City iced the short-lived pedestrian mall project from the 1970s for fear that the proliferation of human beings in one of the city’s preeminent public spaces would bring down the sky.

The current version of this argument, tracing back to 2011, lands today at council’s infrastructure and environment committee, which will be asked to approve one of those classically hedged Toronto compromises, dubbed (and inevitably branded) “#yongeTOmorrow.”

In particular, the committee has to consider the recommended design concept from a municipal class environmental assessment on re-configuring Yonge between College and Queen to allow for wider sidewalks, street trees and more street furniture, with the roadway reduced to two lanes bounded by “mountable” curbs. The short stretch between College/Carlton and Gerrard will have separated bike lanes, but these vanish, in fine Toronto fashion, over the rest of the corridor south to Queen, to be replaced here and there by sharrows.

Unlike some of the other public space changes from the past ten months (new bike lanes on the Danforth, University; the CafeTO measures, etc.), this proposal has little to do with the pandemic except that the last round of public consultations took place virtually for safety reasons. Rather, the City needed to replace a 131-year-old cast iron water main that runs under Yonge – talk about getting value for your infrastructure dollar! – and that work is the occasion for the re-think of what’s above ground. The project budget, according to the staff report, is about $70 million.

The public consultation process served up a variety of configurations – everything from pedestrian-only to various permutations on vehicle/transit lanes, bike lanes and sidewalk expansion.

The stretch north of Gerrard is wide enough to allow for all of the above. But the bowling alley south to Queen required triage, and the recommended result is a patchwork: “pedestrian priority” zones between Walton and Elm, and Edward to Dundas Square, with the rest carved up as two lane segments with turn restrictions or required turns, not unlike the transit-priority project on King Street. Dundas Sq. to Shuter will be one-way north, while Shuter to Queen, the most forbidding part of the whole corridor, still allows two-way traffic, albeit with few options.

The configuration reads like a dutifully assembled and cautious brokering of present interests. The big theatres get their lay-bys, the public space activists get their promenades, and the members of the Yonge BIA secure some landscaping and the obligatory row of doomed street trees.

If you’re on a bike, well, it’s not entirely clear what that experience will be like, beyond complex, but what else is new? In any event, as the staff report notes, there are other nearby north-south bike lanes now, although we kind of have to assume the City won’t uproot them once traffic returns to more normal volumes.

What’s absent from all this very Torontonian accommodation is a long-term vision for lower Yonge, especially the canyon-like southern leg of the corridor, which will remain almost as forlorn with this design as it’s been since the Eaton Centre opened over four decades ago.

The King Street pilot project, by contrast, began with an explicit goal – get the streetcars moving – and the rest of the urban design and build-out worked backwards from that endpoint. Now it’s permanent and ready for the future.

Does #yongeTOmorrow address the future? I’m not sure that either this stretch, or the longer segment running from College up to Yonge, truly reckons with the population density that is redefining this entire area, as one soaring point tower after another rises above the tarted up facades of old Yonge.

What is the reason for allowing traffic to run north from Queen, beyond ensuring that David Mirvish’s customers will always get to leap into Ubers after the show? Why are there four lanes of traffic running north from College, a stretch that fewer and fewer drivers actually use?

Beyond the quotidian practicalities of garbage collection and deliveries, I wonder whether the city has truly engaged with the reality that the Yonge Street of the storied past – the clubs and Sam’s and the strip joints and the drag-racing – no longer exists and will never come back. Something else is growing in its place, but all that coming density, and the activity it brings, should really force us to ask why we’re hanging on to the street-ness of Yonge, beyond a weird confection of nostalgia and logistics?

I also find myself asking what visionary city-builders like Jan Gehl or Janette Sadik-Khan – respectively, the Danish planner behind Copenhagen’s car-free downtown and the New York City transportation commissioner who banned cars from a network of Manhattan intersections, including Times Square – would do if presented with both the problem of Yonge St. and the political cover to fix it.

Given how long this particular argument has dragged out, I feel somewhat loath to suggest that Council should scrap the plan and come up with something bolder. But the fact is that cities around the world are taking big risks with their streets, and doing so because the pandemic has profoundly altered the triangular relationship between public space, city life and resilience.

In this city, we don’t do risk, and so perhaps #yongeTOmorrow will have to do. The shame of it is that this `tomorrow’ plan has failed to internalize the lessons of today.