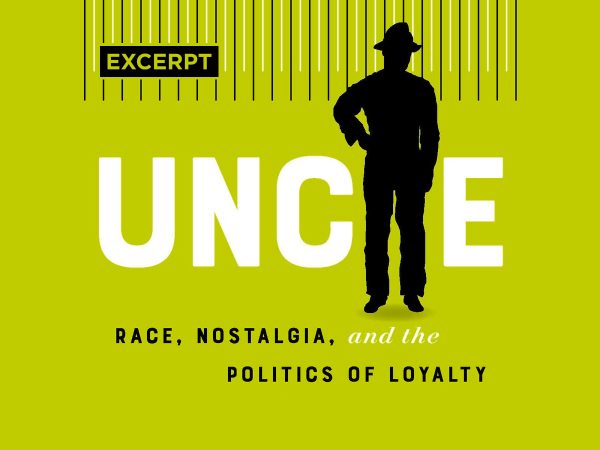 Excerpted with permission from Uncle: Race, Nostalgia and the Politics of Loyalty, published this month by Coach House Books. Thompson, a Ryerson University assistant professor in the School of Creative Industries, specializes in 19th century Black history and visual culture. In Uncle, she traces the social, cultural and political tendrils of Harriet Beecher Stowe’s 1852 anti-slavery novel, Uncle Tom’s Cabin, exploring how the figure of Tom morphs from a heroic enslaved man into a trope, an insult and the inspiration for generations of theatrical interpretations, films, radio and TV characters, and even consumer products. Follow Thompson on twitter at @DrCherylT.

Vaudeville was not the only major institution using nostalgia to shape popular notions of race and gender in the late nineteenth century. At the World’s Columbian Exposition in Chicago in 1893, American audiences became increasingly obsessed with nostalgia for the antebellum South. Human displays as entertainment enticed late-nineteenth-century white middle-class audiences and continued until the mid-1960s. These ‘world’s fairs,’ ‘expositions,’ and ‘exhibitions’ – interchangeable terms – were celebrations of cultural, industrial, scientific, and imperial achievements to promote national pride and economic growth.

The exposition shone a new light on Uncle Tom. The multiple American editions of Uncle Tom’s Cabin – the first published by John P. Jewett in 1852, and the most recent released by Houghton Mifflin in 1891 – were on display in a section of the Woman’s Building Library dedicated to Harriet Beecher Stowe. As in many other contexts at the time, the expo’s organizers employed Uncle Tom’s Cabin to support an optimistic narrative of America’s recent past and triumphant present. In the promotion of a ‘White City,’ as the site was called because of its large white buildings, this electrically lit space presented non-European bodies and the lower classes as exoticized and commodified Others in the disorder of the exposition’s midway. The ‘White City’ in relation to the Other also appeared in newspapers and was made real through advertising copy. Images and cultural events at these world’s fairs created a hierarchical universe in which whiteness was positioned as progressive, modern, and wondrous. Meanwhile, racialized bodies were presented as unchanging, strange, and pre-modern. They served one purpose: entertaining white audiences.

Uncle Tom’s Cabin became an example of ‘classic’ American literature. While it was canonized during slavery and post-emancipation as a book written to humanize African Americans, throughout the 1890s, Uncle Tom’s Cabin helped to reiterate a national narrative of moral and social progress. Stowe’s novel had created a mass market for American literature, and as an agent of history, it had contributed to the nation’s social progress. At the Chicago expo, however, Uncle Tom’s Cabin came to represent more than a symbol of the past and proof of America’s literary coming of age. It was also presented as evidence of America’s moral, political, and cultural coming of age, which worked in tandem to support the ideology of the exposition.

By the 1890s, the public was also primed to view Uncle Tom’s Cabin as part of the spectacle of modern culture, taking its place alongside the minstrel show characterizations of Uncle Tom. Performances of Tom were not just theatrical extensions of Stowe’s character; Tom had become a cultural celebrity independent of Stowe’s novel. The exposition’s various displays brought Tom into a panorama of modern culture, reminding visitors of a past far away from the racial tensions of the period, which included court-sanctioned segregation and anti-Black violence that was rampant through the North and the South.

Demonstrations of ‘colonized people’ at the Chicago expo placed racialized spectacles alongside technological and commercial invention. As ‘real’ Black men and women appeared in public as fictional characters plucked from the era of slavery for the first time, a new era in racial performance was born: the embodied commodity trademark.

Aunt Jemima would become the first of these trademarks. Just as Uncle Tom migrated from the novel to the stage, Aunt Jemima migrated from the stage to the store shelf. She is an important char­acterization of Black womanhood in the 1890s who played to the public’s longing for a simpler past. By understanding Aunt Jemima’s rise to public notoriety, not just as an image but also as a marketing symbol of an emergent consumer culture, we can recognize Uncle Tom’s subsequent transformation into commodity trademarks bearing different names: Uncle Remus and Uncle Ben. 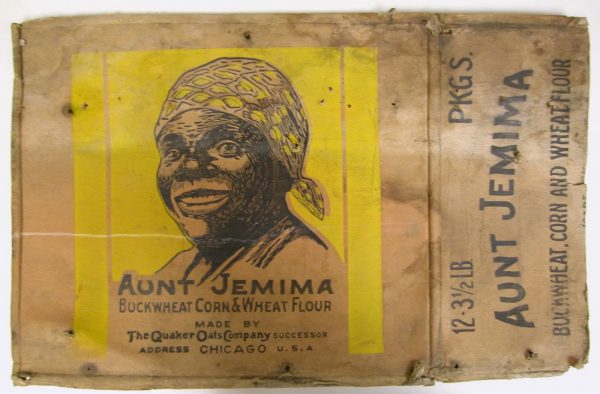 Aunt Jemima was brought to life in the 1890s to speak sweetly of the past, and she, too, was plucked from the pages of plantation literature via tales of Mammy, only to be reborn through the minstrel show.

In 1889, Chris L. Rutt, a St. Joseph, Missouri, newspaper editor and flour-mill operator, produced a ready-mix pancake batter. The product had no name. Not long after launching it, Rutt attended a local vaude­ville house, where he witnessed two white men wearing blackface and drag performing a cakewalk called ‘Aunt Jemima,’ which featured one of the actors in an apron and wearing a red bandana. (A cakewalk was a pre–Civil War dance originally performed by slaves on plantation grounds. By the 1870s, it had become a popular feature of minstrel shows. As a uniquely American dance, it was first known as the ‘prize walk,’ for the ‘prize’ of an elaborately decorated cake.)

For Rutt, the bandana-wearing Black cook personified ‘Southern hospitality,’ so he decided to use the name and image to create the Aunt Jemima trademark for his pancake mix.

The trademark was eventually sold to the R. T. Davis Milling Company, a St. Joseph firm, which devised a new marketing, distribution, and promotional strategy that included finding a Black woman to perform as Aunt Jemima. Nancy Green was a fifty-nine-year-old woman living on the south side of Chicago, working as a cook and housekeeper for a prominent judge. After responding to the company’s advertisement and going through a series of auditions, Green was hired to cook and serve the new pancake recipe at promotional events. Born into slavery on a Kentucky plantation, she became the first Black woman to appear in public and advertising campaigns as Aunt Jemima.

Green made her debut appearances as Aunt Jemima when the company launched the pancake mix at the Chicago expo. Her image tapped into the public’s appetite for nostalgic sojourns at the end of the nineteenth century, a period that saw the emergence of mass consumerism and marked an even broader transformation taking place in North American society. Rapid urbanization and industrialization, accompanied by mass consumption and modern advertising, heralded a new era and forever altered the consuming habits of Americans. Between 1890 and 1920, Americans witnessed for the first time the development of brands and brand names.

American popular culture was also shifting dramatically as the century turned and life sped up. Entertainment entrepreneur P. T. Barnum expanded the traditional circus into a variegated spectacle. Travelling vaudeville and variety acts absorbed minstrel shows and often included whatever performing humans and animals a shrewd manager might lay his hands upon. North American audiences that flocked to these mass-produced spectacles were invited to view the Other through a lens of wonder. These developments effectively set the stage for the presentation of mythic figures from the Old South – Uncle Tom and Mammy – who could serve as reminders of the safety of plantation life in an accelerated world.

In the logic of the product’s nostalgic appeal, Jemima had to be an aunt. Like ‘uncle,’ the terms ‘mammy,’ ‘auntie,’ and ‘Negro’ or ‘coloured nurse’ all appeared in antebellum fiction, describing both a person and a role within the plantation home. Aunties served as nursemaids, cooks, and all-around domestic helpers. Despite this nod to nostalgia, and like a growing number of Black trademarks, Aunt Jemima was very much a product of American modernism. Her presence on packages on grocery shelves reflected advances in American culture. At the dawn of the twentieth century, advertising celebrated and promoted modernity. Packaging once served only as protection for consumer products. But with the advent of brand identification, packaging delivered new kinds of literal and symbolic messages. Thus, when Green debuted as Aunt Jemima, her sole purpose was to wax nostalgic for the old plantation in ways that evoked antebellum aunties and uncles and the ‘simpler times’ in which they lived. In telling stories about her own early life in slavery – a life an entire generation of Americans were not familiar with – along with plantation tales written for her by a white Southern sales representative, Green served up a combination of historic and mythic narratives that Kimberly Wallace-Sanders, author of Mammy: A Century of Race, Gender, and Southern Memory, describes as being ‘designed to perpetuate the historical amnesia necessary for confidence in the American future.’

By cultivating national nostalgia for a common racial past, in which enslaved African Americans were happy and content, the advertising at the Chicago expo (and after) constructed a uniform national memory. For both Northerners and Southerners, Aunt Jemima conjured an imagined past where the plantation kitchen stood for positive, enriching experiences.

During the Columbian Exposition, Green appeared in a booth designed to look like a giant flour barrel. She greeted guests and cooked pancakes, all while singing and telling stories of her life on the plantation. Some of Green’s stories were real, but most were apocryphal. The appearance of Aunt Jemima as a slave, and by extension her pancakes as a product of her servitude, appealed to the public’s desire to imagine a harmonious relationship between Blacks and whites in America. But the brand also framed the Black narrative as something that belonged to the South and to slavery. The subtext was that if Black people like Aunt Jemima longed for the days of slavery, that sanctioned white nostalgia for a past where African Americans were not only stuck on the plantation but were happy there.

The success of Aunt Jemima as a means of selling ready-mix pancake flour inspired imitators: Cream of Wheat created Rastus, a mimetic Uncle Tom, to promote its hot semolina cereal. Later, Uncle Ben became the face of instant rice products. Each of these iconographic trademarks were folk characters plucked from a mythologized pre-industrial time that starkly contrasted with the progressive modernism of the late nineteenth and early twentieth centuries.

In the aftermath of the global anti-racism protests in the summer of 2020, Pepsico, which owns the Aunt Jemima product line, announced it would phase out the brand image and name. Earlier this month, the company revealed that Aunt Jemima pancake mix and syrup would henceforth be known by a new brand — “Pearl Milling Company,” which is the name of the Missouri firm established in 1888 that first began marketing the self-rising batter. “Uncle Ben’s,” the other infamous brand traceable to Uncle Tom’s Cabin, was changed to “Ben’s Originals” last fall by owner Mars, Inc.

Join Cheryl Thompson in conversation with Funké Aladejebi and Nana Adwoa Frimpong for the virtual launch of Uncle, February 24 at 7:30pm. Details and Eventbrite registration.