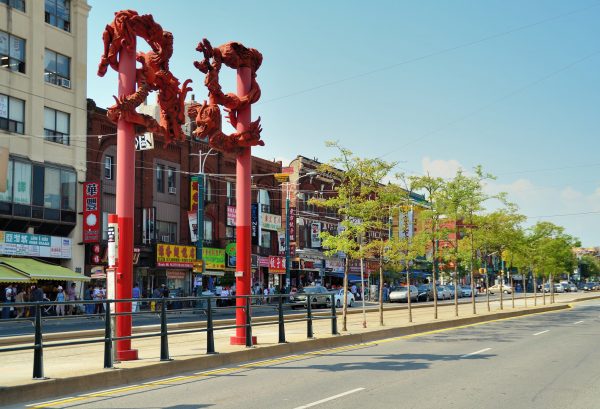 The new issue of Spacing includes an article by Paula Tran, “What will happen to Toronto’s Chinatown?” In conjunction with that question, and with Asian Heritage Month, we present this discussion by Ryerson University professor Linda Zhang.

Often, during times of upheaval, we look to the past for guidance. We hope its successes, mistakes, and lessons can show us what to do in the present when faced with uncertainty. As an academic researcher, this is the first step I take before I begin any project: historical and archival research and literature review. As a human, I look to my ancestry to understand where I come from and who I am.

I’ve been lucky enough to be able to explore my culture in my work, through a project called ChinaTOwn: Future Heritage(s) of Toronto’s Chinatowns that I started in 2018. I had no idea when this project began that we were on the precipice of a global pandemic and the onset of newly refueled anti-Asian racism. While this last year has put a magnifying glass on the inequalities of the present, looking to the past also reminds us that this phenomenon is not new, which is why it’s all the more urgent to consider the impact of racism on Chinatown’s future(s).

If we look to the past, we see that many of the sentiments that Chinatowns experience today are longstanding and not solely driven by the pandemic. The notion of communities of colour being agents of infectious disease is something that North American Chinatowns have been combating since the late 1800s. Before the pandemic, my research looked at the past to better understand the present and move more critically into the future. We talk about anti-displacement in Chinatown, but for years architecture, urban planning, and even immigration policies have been in place that value social cohesion and uniformity over and above an individual community’s way of life.

In 1981, controversy erupted over a proposal to erect a statue in honour of Sun Yatsen in Toronto’s Chinatown West. There was division, even among the Chinatown community, as to what this should be. However, the response from mainstream society neither allowed representatives from the Chinatown community, nor a democratic voting process from the community, to have decision-making power over its own public spaces. Instead, such decisions continue to be made at the level of City Council. This withholding of the community’s control over their own space becomes a mechanism to eliminate and tame expressions of difference, promoting a narrow understanding of what can be included in Canadian civic life. And this situation still exists today. Toronto’s 2017 Public Art and Donation Policy, for example, requires that “work must feature a significant contribution from Canadians, or be an event that occurred in Canada.”

Further back, Chinatowns around North America have repeatedly faced displacement, expropriation, and forced uniformity. In Toronto, its Chinatowns have been fighting against these forces for over 100 years, since the first Chinese neighbourhood, along York Street south of Wellington, was expropriated in the aftermath of the 1904 Great Fire of Toronto. Comparatively, following the 1906 Earthquake in San Francisco, the Chinese community in Chinatown hired a team of white American architects, led by Bernard Maybeck, to redesign and rebuild a Chinatown that was distinctly “Chinese”; one that all Americans could appreciate (understand) and enjoy (consume). As Chinatown stood in rubble, the city did not offer to help rebuild it; instead it saw it as an opportunity to redevelop it into Daniel Burham’s City Beautiful Plan for San Francisco. This plan, developed from this earlier design for the Chicago World’s Expo, featured buildings of uniform height, style, and colour: white. It was nicknamed the White City. Chinatown, and its community, did not fit into this model. At the Chicago World’s Expo, this not-fitting was literal. The Chinese Village and Theatre Pavillion was literally not allowed in the “White City.” In San Francisco, the Chinatown had been seen as blighted, corrupted, and disease-ridden. And so, in order to be worthy of occupying public space, it had to become more appealing to European Americans.

Since then, Toronto and global Chinatowns have gained significant public support from the city but are once again facing similar pressure under the new name of gentrification and boba liberalism. Both are beautification projects, both are rooted in the same desire for social cohesion and uniformity, both are not capable of allowing something as different as Chinatown to continue to persist in what has become an increasingly centrally located neighbourhood. While progress has been made and fought for persistently by the community over more than a century, steps forward have been slow and we are still very much operating under the same model and pressures.

Through researching the past, I wanted to challenge these models, building a heritage framework to embrace the complexity, contradiction, and even impasse that Chinatown embodies. My initial project, which included a participatory heritage-building exhibition, was postponed in March 2020. Simultaneously, we were all experiencing how fast, malleable, and uncertain the future had become. In contrast to century-long models of social cohesion, COVID-19 modelling was changing by the hour. I saw this as an opportunity to create a space of hope, expansion, and compassion: to collectively and radically reimagine what Chinatown could be in order to understand present-day challenges.

Against this collective context, Reimagining Chinatown in 2050 emerged, one part of the ChinaTOwn: Future Heritage(s) project, which is being digitally exhibited as part of the Myseum Intersections Festival 2021. It’s a series of speculative fiction stories written by community authors during the pandemic to reimagine what Toronto’s Chinatown might be like in 2050 (available for pre-order in Toronto at Type Books Junction). Each story is accompanied by a virtual reality companion that brings the architectural worlds of each story to life as an immersive virtual experience.

One story, by Amelia Gan, imagines a Chinatown East after its gate has been mysteriously burnt to the ground twice in a row, signalling that this Chinatown Gate did not fit into the city’s ideals. In this story, the protagonist is tasked with redesigning a new gate that everyone will love. This process is projected to take many years, so in the meantime, a holographic gate is fabricated. In the foreword of the book Jeremey Jih writes, “[The story raises] questions of preservation, identity, the built environment, its relation to symbolic form, as well as the broad society and city.” In many ways, the holographic gate — a four-dimensional, constantly shifting projection of each passing pedestrian’s mental image of Chinatown — provides a far more accurate portrait of the complexities and contradictions of its multilayered pasts, presents, occupants, and potential futures — as do all the stories in this collection.

The stories and projections together become all-encompassing, taking on depths and meanings that a single monolithic story is not able to. And yet, it is at once everything and literally nothing; a mere projection. The stories bring to life the complexity and richness of what Chinatown needs to be in the future, and, more importantly, who it needs to hold space for. The stories, and the silences in between them, offer a space of constant becoming. Difference is not meant to be overcome or fit neatly or cohesively, but rather understood as relational and embedded within a complexly social-cultural network and affect economy.

This aspect of holding space is something Chinatown has continually negotiated since its outset and one of the main reasons for Chinatown’s existence. Against the magnified anti-Asian sentiments over the last year, and looking both into the past and to the future, it’s clear that we still need Chinatown as a public space. It’s an architectural and spatial manifestation of ongoing immigration reform and of policies around multiculturalism in Canada. It’s also an active site of anti-displacement dialogue, continued negotiation against exclusion from broader Canadian society, and an expansion of what and who is included in public and civic life in Canada.

My goal is to unearth the untold stories of Chinatown and hold space for them through architecture and interior design. From its residents, businesses, and visitors, to its neighbourhood architecture and heritage, Chinatown is an invaluable contribution to this city and its public life. The story of Chinatown, and its silences of untold stories, is a history of its people in relation to Toronto and Canadian life. What my design research is calling for is a reformation of the ways in which Toronto and other cities categorize, perceive, and determine the value of public space and infrastructure. We urgently need to reimagine architectural heritage and preservation practices to address its community’s dynamic way of life. This past year, we have all adapted to a new normal, in which the future is constantly shifting. Chinatown, too, is constantly shifting and I hope that we can expand the public imagination around the importance of Chinatown within the city.

The exhibition launch of ChinaTOwn: Future Heritage(s) of Toronto’s Chinatowns takes place on May 23.