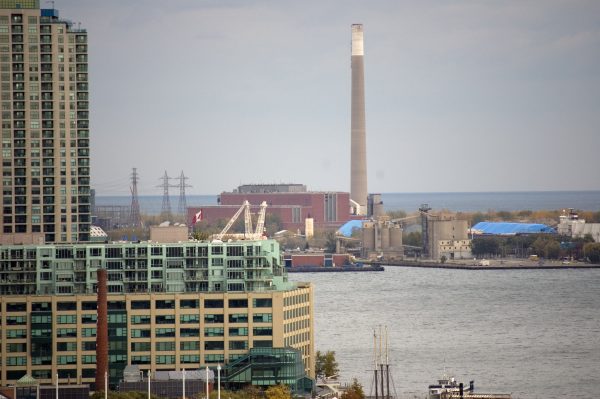 The Hearn Power Generation Station And The Portlands Energy Centre

I watched Greta Thunberg ream out world leaders at the Austrian World Summit, a climate conference, last week, and found myself pondering a key theme of her speech as I read the latest City of Toronto effort to curb local emissions, which passed a key committee this week and is heading off to council later in the month.

The pandemic, Thunberg said, has provided everyone with a vivid lesson in how global crisis response looks and feels. Which is to say, not like the world’s response to global warming. “Let’s be clear,” she told the delegates. “What you are doing is not about climate action or responding to an emergency. It never was. This is communication tactics disguised as politics.”

The City’s long, halting and occasionally inspired approach to climate mitigation shows why, if you zoom in, that both conclusions are true, which is problematic, given the late date.

Toronto has been in the climate policy space for many years. As the staff report shows with the obligatory links to previous council decisions, there are a string of policy moves and resolutions dating back to the mid-2000s, and David Miller’s term as mayor. Some modestly funded retrofit programs surfaced but then went into hiding when Rob Ford took office.

Still, there have been unambiguous wins: the ambitious Toronto Green Standard, now in its third version, the City’s investment in green vehicle fleets, deep water cooling, to name a few.

In fact, according to the City’s 2018 greenhouse gas inventory, Toronto’s community emissions are running at 37% below 1990 levels, which actually exceeds the targets set for 2020 almost 15 years ago, and is almost certainly a testament to record-breaking pre-COVID ridership levels on the TTC, as well as the aforementioned policies.

The update, approved by council’s infrastructure and environment committee, focuses on de-carbonizing the stock of existing buildings – a mind-bogglingly vast enterprise that will cost, over the next 30 years, north of $300 billion, which is almost twice as much as would be spent on business-as-usual upgrades.

“Without support,” the staff report states in the usual way, “these costs would be borne solely by building owners and would likely be passed down to tenants in many cases. The City should seek out opportunities to coordinate investment from other levels of government….”

This is the part where you know that Thunberg has a point about politics.

This “ExB” strategy (all Toronto policies now have to be bundled with a hashtag-worthy acronym) includes a familiar menu of so-called “actions.” By my count, ExB’s recommendations include seven requests for more staff reports, four sets of requests (for money and regulations) to the province and the feds, and two somewhat vague directives to local agencies.

As for policies with teeth, ExB does envision some – notably bylaws that would require building owners, including those with single-family homes, to measure and report emissions (`you can’t manage what you don’t measure,’ as the old saying goes), and then set reduction targets “that will require improved emissions performance over time.” The caveat here is that none of this comes into effect until 2025, and then only if the province agrees to get its climate change policy-book to align with ours.

If Thunberg’s critique is that there’s a lack of urgency, this is what it looks like in practice. A (possibly) dutiful, plodding and highly contingent path towards, well, something, but with none of sense of purpose that characterized government efforts to contain COVID-19.

It’s not news to report that jurisdictional tail-chasing is the culprit in this case, as the City and the upper orders seem pre-ordained to be engage in a never-ending game of hot potato on these kinds of files. Sometimes the province will engage, and sometimes not. The story could be different in 2025, which may be why the staff reports are pitching so far ahead.

Then there are other moving parts that seem so profoundly disconnected from these efforts that it’s tempting to conclude there’s no hope whatsoever.

Case in point: our reliance on natural gas for home heating. To its credit, ExB names this culprit in a more direct way than has been the case previously. As the staff report notes, “Natural gas represents 91% of all emissions from Toronto’s buildings, and almost 97% of emissions from residential buildings in particular, making the reduction of natural gas use a critical focus of emissions reduction efforts.”

As I’ve reported elsewhere, there are no systematic policy incentives designed to drive fuel switching in new or existing buildings, besides some grants and loans for owners who want to invest in non- or low-gas technologies, like electric air source heat pumps. There’s little in ExB that changes this story, and it’s not hard to understand why: gas is cheap and hydro isn’t. The gap ensures that we’ll continue to guzzle gas in our homes, apartments and offices.

But there’s an even more pernicious undertow here besides the absence of policy incentives. For over a year, the Ontario Energy Board has been hunkered down in a deeply complex hearing about future growth in the province’s gas distribution network, which is operated by Enbridge, a regulated monopoly.

The company is required to submit a long-term “Demand Side Management” plan that, in effect, lays out a case for more regional and local pipeline capacity, thus allowing the OEB to set rates for consumers and rates of return for shareholders.

The DSM hearings, suffice it to say, get virtually no media or political attention. Yet these regulatory rulings will lead to the construction of fossil fuel infrastructure that not only lasts for 60 years, but demands, if you pardon the pun, to be fed. In other words, as the City is making oh-so-tentative efforts to reduce carbon, we’re locking in to huge, multi-generational investments in one of the largest sources of urban carbon. If, like me, you get a gas bill every month, you’re in on it. And if you don’t get a gas bill because you rent, you’re in on it, too.

Natural gas for home heating, says The Atmospheric Fund’s vice-president of policy and programs Bryan Purcell, “is a critical climate priority.” While environmental groups initially were optimistic about a new provincial approach to natural gas and conservation that would stretch out to 2030, Queen’s Park quietly reeled in its goals over the winter. “The OEB responded by directing Enbridge to include only modest targets,” he notes.

At the moment, Enbridge’s rates are set so that it can offer some rebates for high-efficiency furnaces, at an annual cost of about $150 million. “It sounds like a lot, but compared to the need, it’s fairly small,” Purcell says.

Environmental groups like TAF and Pollution Probe are taking part in the hearings. Purcell argues that it may be time for the province and the OEB to completely overhaul the traditional approach to natural gas consumption by promulgating conservation policies that provide building owners and homeowners with financial incentives to get off gas entirely instead of simply moving to high efficiency gas furnaces.

None of this is within the jurisdictional purview of the City, and it’s barely on the political radar. The media and the public haven’t got the technical chops or the patience to properly engage in what is arguably the single most impactful climate policy discussion now taking place in Ontario. Instead, we’re left to dream about benchmarks and audits and bylaws that, in all likelihood, won’t get passed because the City lacks the legal clout to enact them.