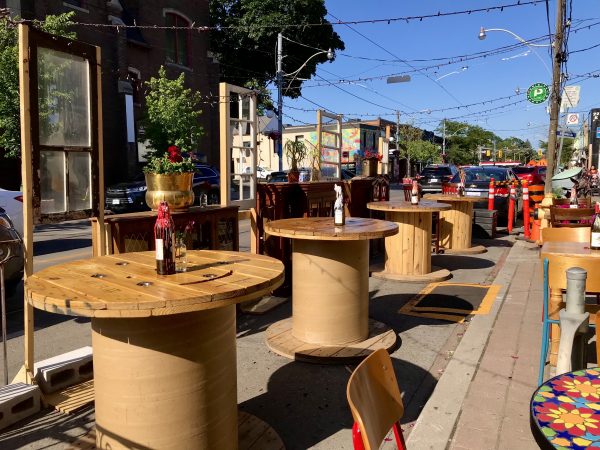 Lake Inez at Gerrard and Coxwell.

We met friends for dinner on the weekend, on the patio of a little taco place along St. Clair West. Outside the patio, on the sidewalk, was a bench and on the bench were two women, waiting to be seated. The waiter came out, took their drink order and brought back a couple of mojitos, even though they had not yet entered the patio.

Here’s the kicker: moral panic did not ensue, nor acts of licentiousness, drunken conduct or brawling. The neighbourhood immediately to the south did not experience a precipitous drop in property values. The sky, in short, did not fall.

Is it possible that the groovy CafeTO vibe of recent weeks has dulled the punitive zeal of the City’s bylaw enforcement squad, or did this particular restaurant just get lucky?

I’d guess the latter. Consider this recent case in point. The owners of Lake Inez, a five-year-old eatery at Gerrard and Coxwell, decided to eschew the ‘official’ CafeTO patio décor (pylons, planters and enclosure structures in a few styles) in favour of something funkier.

Manager Zac Schwartz and his partner scrounged up several old hutches and window frames, and used these to buffer the enclosed street patio area. He also strung up some lights, extending over the sidewalk from the restaurant to the patio, to add a bit of a festive vibe.

Schwartz promptly got a visit from by-law enforcement. “The guy charged in and accosted my employees.” He was told that the enclosure was too high, that the cones couldn’t be swapped out for other barriers, and that the string of lights, because it passed over city property (the sidewalk) was simply unacceptable. The enforcement officer also said the City uses a ‘three-strikes and you’re fined’ approach. As of this week, Schwartz says he and his partner haven’t quite figured out how they’ll respond. “He was very rigid…My tendency is just to rebel against this shit because the bureaucracy creeps me out. I guess I’ll see how serious they are.”

The moral is that no one should be fooled by the sight of all those patios that have sprouted again from parking spaces on so many main streets throughout the older city. At this point in the pandemic, our relief and surprise that these amenities exist at all shouldn’t obscure the reality that the City’s seemingly boundless capacity to micro-manage public space hasn’t abated; it is merely in hiding, sort of.

Exhibit A: in the CafeTO guidebook, the word “temporary” turns up 51 times in a 54-page document. The guideline also makes several references to the Alcohol and Gaming Commission of Ontario (AGCO), which has, through its encyclopedic licensing regulations, the capacity to make or destroy restaurants and bars.

Seeking to prove it’s not oblivious to the global health crisis or the restaurant lobby, the AGCO last year enacted amended regulations approved by the provincial cabinet that effectively enabled municipalities to enable restaurants to operate these temporary patios. One of the key operational details is that alcohol may be moved from the restaurant, through unlicensed public space (gasp!), and served in the aforementioned parking spot, all without the need to obsessively cattle-pen the whole affair lest an impressionable minor wanders in. 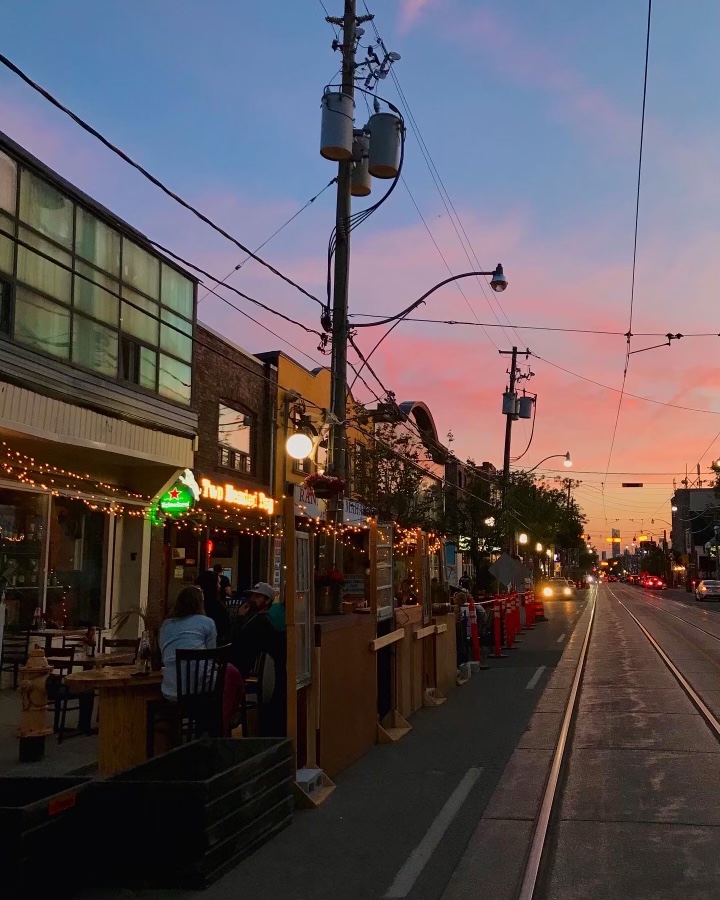 Lake Inez at Gerrard and Coxwell.

Again, it’s worth noting the regulations clearly state that all this new-found space is “temporary.” The City and the province did us a favour, and they can always take it back.

There are, needless to say, far bigger problems in Toronto than patios. Affordable housing, poverty, homelessness, sprawl, representative governance. But the pandemic, as many people have observed, altered our understanding of the importance of public spaces, from parks to streets to parking spots. It forced us to confront the harsh truth that Toronto neglects and undervalues its public spaces, when in fact they should be seen as invaluable assets that enable street life, equitable recreation, low-carbon mobility, health, local economic development, etc., etc. The list of benefits is long.

The pandemic has also offered up a chilly reminder of the City’s long-standing obsession with controlling public space, and how this moralizing compulsion can shape-shift into public health restrictions. The trait is not new. But we were less attuned to this institutional habit in before times, when there was more to do and less to catch.

Restricted access to public bathrooms is everyone’s favourite example. But the Toronto Ombudsman’s report, issued last week, demonstrated vividly that the City not only set out to unnecessarily restrict public space early in the pandemic, but applied its enforcement might, via tickets and fines, in evidently discriminatory ways. Not that that outcome is a huge surprise, mind you. The point is that the Ombud’s findings demonstrate both the City’s instinct to over-determine its authority, as well as the troubling variability in its enforcement practices.

Coming out of the crisis, the thing we need to highlight is that it’s neither the bylaws nor the enforcement that are the problem. The core concern, rather, has to do with Toronto’s deep-seated cultural instinct to minutely regulate perfectly reasonable activities that take place in public. The corollary is that we need to regulate less, not regulate better. And the way to achieve that particular goal is not to strike a staff committee or pass a motion in council to figure out how.

Let’s come back to Lake Inez. The city’s long-standing approach to managing the curb spaces that are now pop-up patios can be traced to over-regulation of transportation rights of way, a failure to recognize street parking as an opportunity cost rather than a convenience, and the judgment baked into the AGCO’s mode to issuing and enforcing liquor licenses.

The law that enables the AGCO to do what it does is a direct legal descendent of the temperance movement that gripped English Canada in the late 19th and early 20th centuries. Once you understand the legislation’s DNA, it’s impossible to read the nit-pickiness of the regulations and not see those late Victorian fingers wagging disapprovingly:

“The licence holder shall make a daily record indicating the amount of beer manufactured for sale and the amounts of beer sold at each location referred to in subsection (3), including beer sold for delivery under section 56.2, and shall retain the records for two years.”

Or: “If a licence is suspended, the licence holder shall post a sign provided by the Registrar concerning the suspension and shall ensure that the sign remains posted throughout the suspension.”

And: “The licence holder shall not permit drunkenness, unlawful gambling or riotous, quarrelsome, violent or disorderly conduct to occur on the premises or in the adjacent washrooms, liquor and food preparation areas and storage areas under the exclusive control of the licence holder.”

The interesting and perhaps once-in-a-century opportunity with measures such as CafeTO or, to choose another example, new rules allowing commercial trainers to offer fitness classes in parks, is for the city to stand back, look at whether anything negative or harmful happened as a result of such moves, and then just make them permanent. Easy-peasy.

Does stringing the lights above a sidewalk do any harm? Only if there are rules that conjure up phantom problems that only the rules can solve. Do 21st century liquor licensing laws need to be so profoundly pedantic as Ontario’s are, given how the rest of the world handles the serving of alcohol? Of course not.

The crucial caveat is that making these changes permanent must not become an invitation for the City or the province to create more busy-work for rule-makers. The food truck fiasco of several years ago is a testament to how officialdom can meddle a perfectly good idea into submission. No municipal official needs to figure out what nice patios should look like.

If something is working in the post-pandemic city, how about we just let it be, and stop there? Just stop. Less, in this case, will definitely be more.