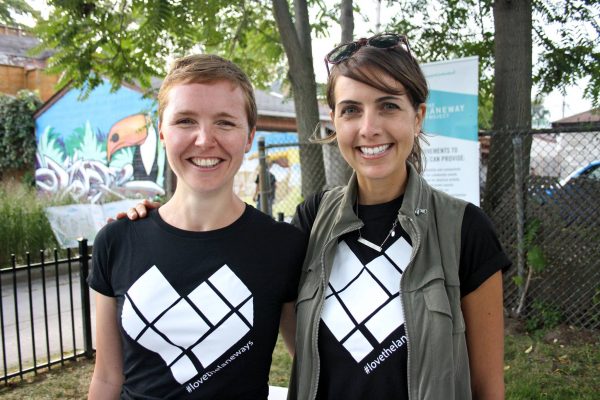 Michelle Senayah, co-founder of the Laneway Project and a force behind Open Streets Toronto, died suddenly at the age of 36 earlier this summer. In tribute to her and everything she did for Toronto, we are publishing this Q&A with Senayah that appeared in our “Laneway” issue (Spring 2019). The interview was conducted by Glyn Bowerman. You can also listen to him talk to Senayah on the Spacing podcast.

The Laneway Project is a major force in this city, working with different communities to help take stock of their laneways as potential assets, and activating them in a way that makes them more welcoming, functional, multi-modal, safe, and environmentally friendly in terms of stormwater and pollution management. Spacing spoke with The Laneway Project’s co-founder Michelle Senayah and asked her how we can make laneways Main Street in our hearts.

Editor’s note: This interview was condensed for clarity and length

Who is The Laneway Project, and how did you all come together?

The Laneway Project is a planning and placemaking not-for-profit focused on laneways and their revitalization. Specifically: turning them from what they are in a lot of cities right now — which is sort of purely utilitarian, heartless, dirty, maybe unsafe-feeling spaces — into spaces for people that feel good to be in, and that also still work robustly for all of those unsexy servicing functions that are so essential to what laneways do.

I come from an architecture and urban design background and I was doing some other public-realm work in the city (I’m programming director at Open Streets TO). As with anything, when you’re looking at a particular area, in this case the public realm, you become aware of more depth and nuance to what’s going on with it, and I became aware of these laneways as underused spaces. Surely someone must have seen the opportunity here, and the fact that we can be using these laneways better than we are now? And that we can be designing and constructing them better than we’re doing now? That was the genesis of it. Another woman, Ariana Cancelli, is the co-founder, and she came to a similar conclusion from a bit of a different place. We decided to partner together.

Few people give laneways much thought. What potential do you see in them?

We see the potential for them to be fully-integrated parts of our public realm in a way that they’re not now. Functionally, a lot of the time, they’re used as multi-use spaces for things other than purely service delivery or parking access or garbage storage, which is what they’re explicitly designed for. They’re these accidental or unacknowledged multi-use spaces, and quite an interesting layer of our public realm that, from our perspective, really has the potential to be knit into, and complement the other elements of our public realm, like streets, parks, squares, and even the ground floors of adjacent buildings.

Definitely. The interesting thing, when looking at other cities, is there’s a certain toolkit that other cities use, but it’s always specific to the particular context of that city. So when you look, for instance, at Vancouver, they’ve got a real issue with housing provision and affordability, so there they led with laneway housing, because that was the pressing issue. When you look at a city like Chicago, they had a real environmental issue in their laneways. They had a lot of flooding, and the attendant hard-surface city problems with heat-island effect and all of that. So they have approached their laneways or their alleys with a very infrastructural focus: they get permeable paving in there, they get vegetation along the edges, to deal with those environmental issues. And then when you look at a city like Melbourne in Australia, their issue 20 years ago was that they were becoming a “doughnut city.” No one wanted to live or work in the downtown: everyone was fleeing to the suburbs and inner suburbs. So the approach that the municipality took there to reverse that trend was to develop micro-scale spaces — retail and studios and things like that — along their laneways, because they have quite a dense network of laneways in the same way that Toronto does. They led with the micro-retail component, and from there it blossomed out to include the improvement of the laneways as public spaces. Because that’s sort of a no-brainer, once they’re accessing people’s shops and cafes and restaurants and things like that. You see a common set of tools being used in all of these, but the way they’re put to work and the exact way they’re used differs, and exists in response to the particular context of those cities.

Is there a uniquely Toronto laneway?

In Toronto, at the moment, we have more opportunities than best-practice examples. That said, over the past four-and-a-bit years, we have worked with more than 30 communities to assess and revitalize their laneways. What we do have is a common set of things that need to be done in the laneways: the things that come up every single time, no matter which laneway we’re looking at, no matter which community we’re speaking to. Although there’s a huge diversity of different communities — spatially, socially, economically — within that spread, there are these common things that come up. We call them the “laneway no-brainers,” because it’s stuff like good lighting, proper waste management, proper traffic management, serviceable and well-maintained paving, that really are no-brainers for other types of public space, but that currently, in a systematic way, we’re not doing in our laneways.

If you look at the city in its early days, where plenty of activity happened in laneways in what was known as “the Ward” downtown and other original Toronto neighbourhoods, it seems like we’re trying to get back to that: a community network.

I think about that a lot. We had that interim period where everything was strictly separated, even though that’s not how people actually use the city, particularly the public realm. Now we’re getting back to acknowledging that these are multi-layered and messy spaces that a lot of things go on in, and we should be treating them as such.