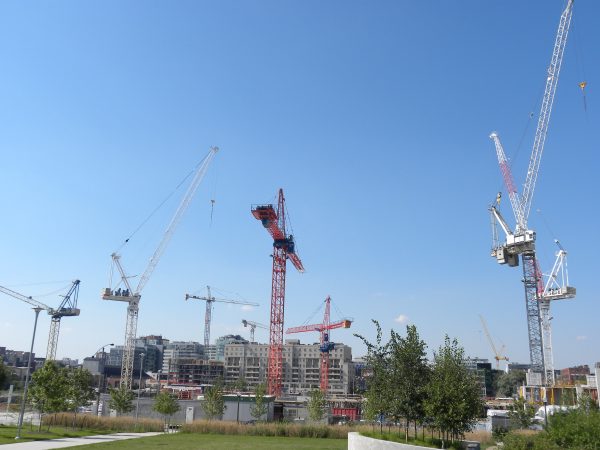 Update: Council’s planning and housing committee approved an amended version of the inclusionary zoning staff report today (October 28), which includes changed proposed by Mayor John Tory to review the bylaw as early as next year and “make any changes necessary to ensure market stability.” Other proposed changes, such as increasing the proportion of affordable units in new rental buildings, were referred to staff for further study, prompting disappointment from some housing advocates, including Acorn Toronto, which tweeted that the current proposal, now heading to city council, takes an approach that is “too low and too slow.”

Those who pay attention to the ebbs and flows of the debate over how to plan Toronto will know that “inclusionary zoning” is one of those mirage-like affordable housing reforms that always seems to be on the verge of materializing, but then invariably vanishes over the horizon.

Locally, I’ve found references as far back as the early 2000s, and, more recently, as proposals that emanated from  Kathleen Wynne’s Liberal government in the mid-2010s. In New York and Vancouver, IZ has been a part of the planning toolkit since the late 1980s, and other municipalities enacted mandatory IZ bylaws in the early 2000s. Somehow, we’ve always missed the bus.

The idea is simple enough: require developers to add affordable units to their projects as a condition of approval or in exchange for additional density. It’s an admittedly neo-liberal approach to the dearth of affordable housing, and one we’ve approached oh-so-gingerly, for fear of scaring the development horses. But it’s neither radical nor untested.

Last week, City staff finally released Toronto’s first formal IZ bylaw proposal – a fat package of staff reports, appendices, consultation summaries and studies, all of which recommend that council adopt a cautious but nonetheless assertive policy designed to ensure that affordable units will be baked in to the intensive development activity coming to the vicinity of rapid transit stations across the city.

The most noteworthy elements are that IZ will be mandatory for projects with more than 100 units, that affordability (for both condos and rentals) must be guaranteed for 99 years, and that the affordable apartments themselves should preferably be incorporated into all new developments, and, if not, then built within close proximity.

The recommendation — which has yet to pass the planning and housing committee and council — is that each project be required to set aside 5 to 10% of units starting next year, with those thresholds gradually raised to 8 to 22% by 2030. (This comparison shows that IZ policies in other cities vary widely.)

The big caveat here is that the provincial Tories re-jigged their own planning regulations so that IZ rules only apply within so-called “protected major transit station area” — zones within 500 to 800 metres of a subway, LRT or GO station. Under the new official plan, which is currently under construction, these zones will have to achieve a specified minimum density of jobs and housing units. There are 180 rapid transit stations within the city’s borders, but only some of those — mostly core area subway stops — have (yet) been designated as PMTSAs.

The skinny is that most of the buildings that will fall under the IZ bylaw will be, initially, along the Bloor-Danforth subway lines, although the City says the areas that eventually fall under IZ rules may include parts of Scarborough, North York and southern Etobicoke. (The City last year released a report detailing how it plans to phase in the MTSAs.)

There are definitely some planning policy wins here. The provincial reforms achieve something that has eluded council for years: they prevent developers from simply scooping all the choicest and most marketable sites – invariably near rapid transit — and then selling them for as much as the market will bear, which is plenty.

The combination of the provincial planning laws and the City’s new proposed IZ bylaw essentially says that developers can’t just turn the vast public investment in transit infrastructure into private profit. To build near transit stops, they’ll have to give something back – apartments which have long-term guaranteed affordability. (The price/rent ranges are on pages 32 and 33 of the staff report.)

Yet the staff’s proposed policy comes with some concerning question marks. The recommended definition of affordable is limited, and pegged to moderate to mid-range income levels. (The staff report cites, by way of example, incomes that would be typical of nurses or daycare workers.) If the City wants to see so-called “deeply affordable” units in projects that fall under the IZ rules — i.e., for really low-income families — it will have to pony up subsidies, and then persuade a developer to agree to include such apartments, hardly a given.

The staff report is also mute on the question of how affordable ownership units will remain affordable if they are re-sold later on. A developer might be required to sell some units at below market rates as part of the initial offering, but it doesn’t take an especially Machiavellian imagination to figure out how to game that system with a bit of creative flipping.

It’s also not obvious whether the City will have the ability to drive the creation of rental units within IZ zones. After all, if most of the new development comes in the form of condos, as opposed to purpose-built rental apartments, much of the promised long-term affordability — those 99-year guarantees — could fail to materialized. (The City can’t dictate tenure.)

Moreover, the staff report doesn’t explain how the planning department will deal with the proposed set-aside ranges (5 to 10% rising to 8 to 22%). Who makes the call on the actual proportion of set-asides in a given project? And what would compel a developer to aim for anything except the low number in the range?

The devil in this policy will definitely be in the details.

A final picky comment: nowhere in this huge package of information is any kind of prediction about how many affordable housing units might be generated by this long-sought regulation. It seems like a significant omission.

While the planning department commissioned extensive economic models to gauge the impact on investment, City officials told me they were reluctant to publish projections because the latest provincial rules are so new and untested.

The planning department did, however, work up a backwards looking estimate, which is not in the report. Using the 5-10% set aside range, and looking at the development projects that were in the pipeline between 2015 to 2020, the new IZ rules would have generated 11,800 units based on the proposed areas. With the 8-22% figure – the fully phased in 2030 threshold — that number rises to 25,500.

Impressive? Yes, but as the City’s own jurisdictional comparison acknowledges, the IZ policies in cities like Boston, Chicago, and Los Angeles haven’t yielded particularly large numbers of affordable units — in the thousands, and over a longer period, suggesting these kinds of rules come fitted out with loopholes.

My guess, then, is that the City’s planning officials want to manage expectations.

Which is fair, but I also think that if there are no targets, both short and medium term, then there’s no pressure on council, the City or the developers to ensure that these milestones are met. And, even more importantly, residents and voters can’t tell if we’re making progress, blowing smoke, or merely adding new supply that average families can’t afford.

What’s more – and this is my long-standing gripe – the City simply does not report routinely on the net number of new affordable housing units built each year. There’s a bottomless well of rhetoric from across the political spectrum about the need for more affordable housing, as well as plenty of ambitious long-term targets (e.g., in the HousingTO 2020-2030 plan, or the Housing Now strategy to create affordable rental on City-owned land). Once in a while, a damning counter-factual bobs to the surface — e.g., a 2019 Auditor General’s report on Toronto Community Housing’s failure to a  build a significant number of new affordable units through its various multi-billion-dollar revitalization projects.

Despite all that, there’s almost no way to figure out how we’re doing on a year-over-year basis. Seems so basic, and yet…

My unsolicited advice, then: if council does actually adopt an inclusionary zoning bylaw, it will be a big deal, and an important reform for a council that sometimes seems to view the development industry as a precious flower. So the City should seize on this opportunity to also create a publicly accessible dashboard that shows everyone how the planners and the builders are doing when it comes to actually delivering on the promise of new affordable apartments.

As the old accountants’ saying goes, you can’t manage what you don’t measure.