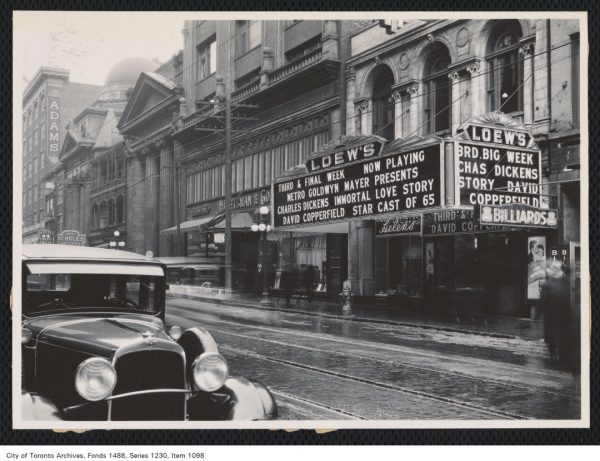 Loew's Theatre, Yonge Street, documenting the neon marquee. The view is looking north-east, showing the east side of Yonge Street, north from the theatre. The theatre marquee advertises the 1935 movie "David Copperfield."

Opened in 1913, the Elgin and Winter Garden Theatre was built as the flagship Canadian theatre in Marcus Loews’s successful chain, and once offered both Vaudeville performances and moving pictures.  Renamed the Elgin in 1978, the Loews name can still be spotted from Queen St E and Victoria, near the roofline of the theatre’s rear. 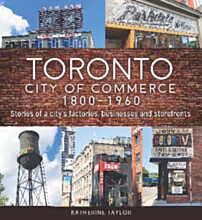 In 1912, two small businesses quietly closed up shop and vacated their storefronts on Yonge Street, just above Queen. With their departure, the way was cleared for a new building — a grand theatre courtesy of an American movie mogul named Marcus Loew.

Marcus Loew was born in New York City on May 7, 1870. Born into a poor Jewish family recently arrived from Austria, young Loew had one of those childhoods that is unimaginable now.

At just six years old he was selling newspapers in front of a saloon after school each day. At nine, he quit both the newsstand and school to work at a map-colouring company, making 35 cents for ten-hour days. A workers’ strike that ended in a lock out spelled the end for this particular job and Loew had to move on.

After a stint putting out his own newspaper and a job as a salesman in a men’s clothing store, Loew found work in a fur factory where he operated a hand-cranked cutting machine for 11.5 hours each day. Miserable as it no doubt was, the now twelve-year-old gained a lot of know-how in the industry. By eighteen, he was ready to take a stab at running his own fur company — alas, a year later he was bankrupted. No longer interested in running the show himself, he took on a salesman job for another furrier named Herman Baehr. Here he fared much better, and with a knack for salesmanship soon became a partner in the company.

Categorized as “places of amusement,” penny arcades featured coin-operated machines. While a good many were games, others could tell your fortune or how much you weighed. (The allure of the latter is mystifying today.) But chief amongst these devices were the peep shows. Originally, these were really just machines you “peeped” into to view amusing pictures. But, as you might expect, they would eventually contain images of partially nude women.

After Zukor introduced him to the penny arcade business, Loew was sold. Initially he invested in Zukor’s company, Automatic Vaudeville, but in 1904, he decided to start his own company and called it People’s Vaudeville. By 1905 he had five arcades in New York and another in Ohio. It was during a visit to the latter that it was suggested Loew visit an arcade in Kentucky for a look at a new marvel — a moving picture show. 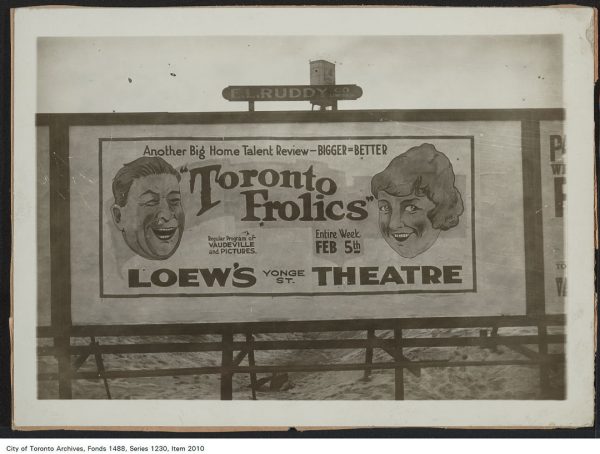 Visiting the Kentucky arcade, Loew was directed upstairs where the operator had set up some chairs and a projector. This was called a nickelodeon, and Marcus Loew recognized it as the next big thing.

Less than two years later, Loew was looking to expand his budding empire. He bought and refurbished a run-down Brooklyn theatre and renamed it the Royal. He offered both vaudeville and moving picture shows. And so began Loew’s movie and theatre empire.

In 1913, with dozens of theatres humming along in the U.S., Loew decided it was time to try for the Canadian market and opened his flagship theatre on Yonge Street.

Though silent films were becoming quite popular, Loew was still uncertain if they’d stick, and so, hedging his bets, he had a split theatre built, with the upper theatre dedicated to vaudeville and the lower to film.

In 1928, the vaudeville theatre, the Winter Garden, was closed as moving pictures gained dominance. In 1981, the lower movie theatre, since renamed the Elgin, closed as well. Fortunately for the city, the Ontario Heritage Foundation took on the building and restored it to its former glory, reopening it in 1989.

Katherine Taylor is a banker and history buff. She publishes One Gal’s Toronto. Follow her on twitter at @onegalstoronto.