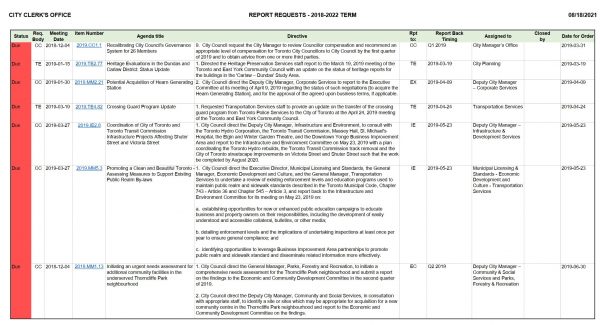 Asking overburdened staff for reports is one of the favourite pastimes of Toronto city council. But what happens to those report requests? It turns out a lot of them simply disappear into a bureaucratic limbo, never to be seen again. Could there be a better way of doing things?

When I was co-chair of the now-defunct Toronto Pedestrian Committee, back in the pre-Rob Ford era, one of the elements of municipal process I found disorienting was the lack of any official tracing of the results of our deliberations.

We were just a citizen advisory committee, but we were an official body and had full support from the City Clerk’s office. They were very patient and helpful with a group of citizens trying to navigate those processes. But while they produced great agendas, and minutes summarizing decisions, once those decisions were made, there was no real tracking of what happened to them.

As an advisory body, we couldn’t direct staff – but there were staff assigned to us, and they might agree to requests for reports and studies. And they often told us about work in progress, regarding which we might make resolutions. We could also send motions up to council committees for consideration. But unless we followed up ourselves, or staff suddenly showed up with a report we’d requested, we wouldn’t know what happened, or didn’t happen, to our decisions.

At the same time, we were very aware that staff’s time was extremely limited, and myself and some other co-chairs tried to limit our requests for staff time to those that were both practicable and important. Some of these resulted in useful outcomes. But others, although agreed to by staff, never resurfaced, and unless we were keeping tabs ourselves and brought them up again, they would never get fished back out of the administrative abyss.

Consideration of staff time doesn’t appear to play a role when it comes to councillors making requests of staff at city council. The demands for reports in committee and council minutes seem endless. For a long time, I’ve wondered what happens to the many reports that councillors direct staff to prepare (since, unlike the pedestrian committee, council has the power to direct staff).

Usually reports are given a deadline, but committee and council agendas don’t list the reports that were due by a certain meeting so that councillors and citizens can see if they’ve been completed.

However, thanks to a Twitter exchange and a tweet from Urban Policy Lab director Gabriel Eidelman, I have learned that there is a spreadsheet on the city council website that tracks all report requests.

Does the city clerk or someone else track all councillor requests of staff? Having such a list and reviewing as a regular part of council might be a good way of ensuring things aren’t falling between the cracks

And it turns out, there are indeed a lot of report requests. The report request log for the current council term runs to 260 pages. There are, at the moment of writing, 1,734 requests for reports listed in the spreadsheet, from less than 4 years of council and committee meetings.

Of these, 62 pages list 393 reports that are overdue (and will likely never be completed). About 100 pages list reports completed, and the rest are open or ongoing (not sure what the distinction is), including many past their theoretical due date.

When councillors propose new initiatives, any financial costs are itemized, and council needs to make sure those costs can fit within the constraints of the City’s budget before the proposal is approved.

Staff time is also limited, but although council ultimately controls the number of staff hours available (through the budget for staff positions), there doesn’t seem to be any constraint on the weight of demands on staff time that council can make.

The result is that council piles endless report demands on City staff. Since actual staff time is limited, staff end up picking and choosing which reports to follow through on – based perhaps on informal power dynamics (e.g. what the Mayor wants), and/or perhaps on staff preference. It’s a process that is neither reasonable for staff, nor transparent for councillors and voters.

Of course, it may be that sometimes councillors make report requests to satisfy constituents, or to delay a decision, without really being invested in the outcome. And sometimes the report requests might be based on a passing enthusiasm by a councillor that is not really practicable and would be a waste of time to pursue. But the current system enables these behaviours by not demanding accountability from either councillors or staff. And either way, it means the process of municipal governance is opaque to us voters outside the system.

So here’s an idea for a solution to bring a bit of accountability to the report-requesting process.

Next, when a report is requested, the number of hours it would need for completion would be established, in the same way that if some program or construction project that requires funding is proposed, the financial cost is established.

Finally, councillors would have to bid on the available staff hours for their report requests. Perhaps every councillor would be assigned an equal number of hours per year for their reports, and could not use up more than that. Councillors could pool their hours, each contributing a few to a report they mutually want to pursue. Mayors would also be constrained, although they might get more hours than councillors.

Or perhaps councillors would put in bids and their colleagues would vote on which ones to give priority to. Or there could be some combination of the two – every councillor would get a certain number of hours, and there would be some floating hours available for priorities shared by most councillors.

In exchange, staff and clerks would track the outcomes of the reports more systematically, rather than just keeping a spreadsheet. On a report’s deadline, it would automatically be included in committee and/or council agendas, and staff would have to give reasons if the report wasn’t ready on time, and set a future alternative date for completion.

Obviously this would not be an exact science – no doubt some hour requirements would get underestimated, just as financial costs can be underestimated. But given the number of reports staff put out every year, it seems likely they would usually have a good idea of how long one would take. Even having ballpark figures would be a big improvement.

This is probably one of the *best* ideas I have seen in a very long time – entirely aligned with Project Mgmt best practices and entirely possible to implement because the City has a very long and detailed list of how long each project takes. @alexbozikovic @m_layton. #TOpoli https://t.co/DO49hUe2aR

If councillors became frustrated or dissatisfied with the limited amount of time available, they could always hire more staff – they would just have to explain why property taxes, or fees, were going up to pay for the extra staff to satisfy their demands for reports.

Having 260 pages of reports demanded from staff in a single 4-year term seems over the top. Knowing that the majority will quite likely never be completed seems almost absurdist. The City has been looking at ways to reform its governance – perhaps this is an area council should look at more closely.