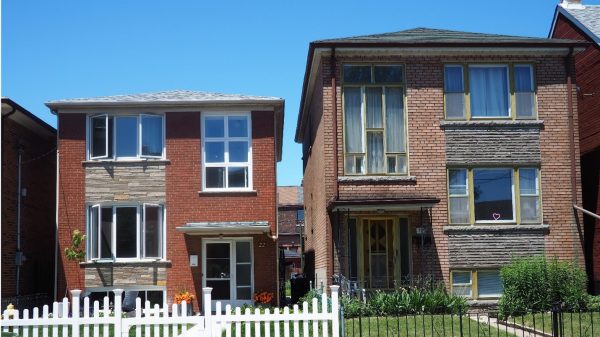 The “Toronto Special” is a distinctly urban home that emerged during a post-war period associated with the rapid expansion of suburban subdivisions. They appeared suddenly across Toronto in the 1950s to replace pre-war suburban cottages and inner-city homes or to fill out vacant city blocks. How and from where did this unique Toronto walk-up apartment home emerge in a suburban age?

The history of these buildings is still poorly understood, but looking through the Toronto Archives and searching property records suggests a possible origin of this home design and its sudden emergence.

The design is rooted in Toronto’s hesitant embrace of post-war Modernist architecture and the search for a simple, cost-effective product for mass-produced housing.

One of Toronto’s first successful modern apartment complexes was the Garden Court Apartments in Leaside. Started in 1939 and finished in 1941, it had some characteristics that foreshadowed the Toronto Special. Each apartment extended the width of the building, with broad windows and a well-lit central staircase. 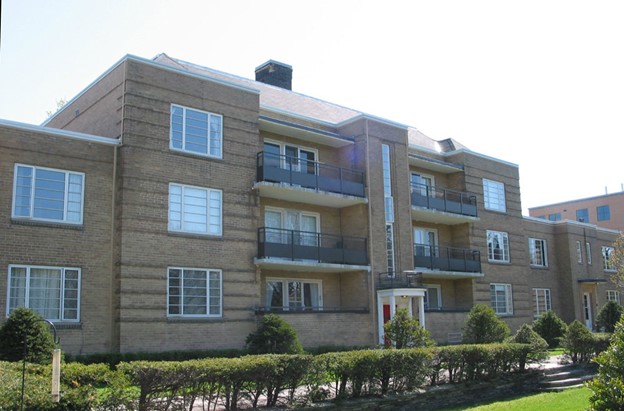 We can identify other multi-unit buildings through the late 1940s and early 1950s that borrowed and updated these elements. A duplex at 1848 Bloor Street West, built in 1950 and designed by Neil McColeman, appears to have been inspired by Garden Court and brought together the main elements of the Toronto Special. Yet Toronto in 1950 was still too conservative, and the design was not ready for mass consumption. 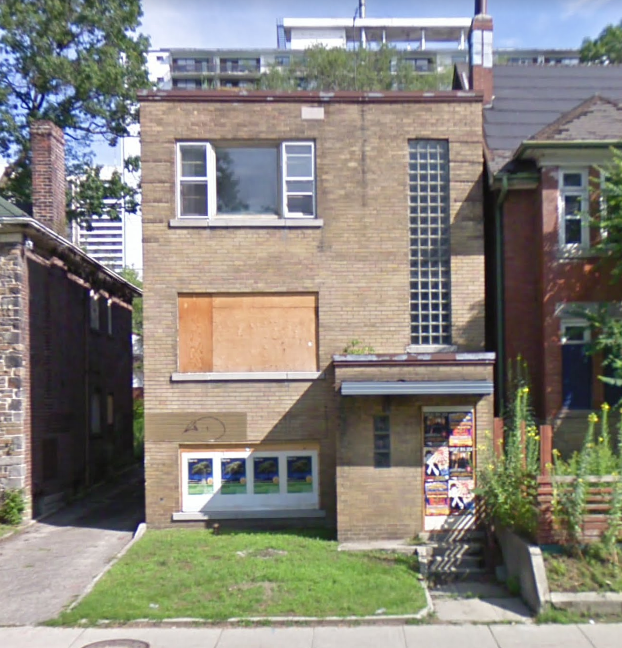 Oaklawn Garden is another fantastic example of a Modernist apartment and duplex design percolating through Toronto’s architectural community. The cul-de-sac of five apartment buildings was designed in 1951 by J.E. Hoare Jr., who also designed the first phase of Regent Park. Tucked away near Avenue Road and St. Clair Avenue West, it builds on the design of Garden Court, but in a denser context, and simplifies some design elements. It was built by John Bellomo, an Italian builder and designer. He built over a hundred homes in Leaside beginning in the 1930s. 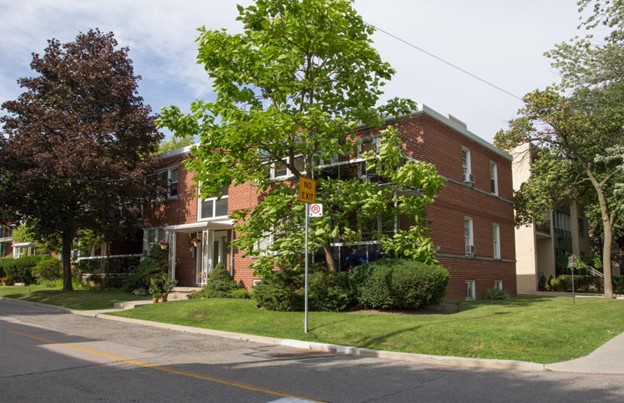 But it wasn’t until 1953, when the massive Don Mills Development was launched in North York, that modernist design for residential buildings went mainstream.

Evidence from the Township of York, then a suburb northwest of Toronto, suggests that the widespread emergence of the Toronto Special overlapped with the launch of Don Mills. The Township reported a rapid increase in the number of permits issued for duplexes, tripling between 1954 and 1957 from 22 to 71. Presumably, most of these were in the style of the Toronto Special.

One factor that may have supported the spread of the design was the new National Housing Act of 1954. The Act assisted smaller builders because it introduced a system of insured mortgage loans and allowed banks to become lenders under the Act. Suddenly it was easier to get a loan to tear down an older home and replace it with a new multi-family home.

By 1954 the public was ready for Modernist styles germinating over the previous decade. But who brought Modernist design ideas from the suburbs to the city?

To tackle this question, I started with a sample of 24 duplexes and triplexes and researched their property history. While preliminary, the table below provides an example of three of the actors involved in that survey.

The research suggests a group of primarily, but not exclusively, Jewish builders began to produce the Toronto Special in the northwestern part of Toronto starting in 1953 and 1954. Eastern European refugees from Lithuania, Poland, and Latvia appear to have carried the design into the older Toronto neighbourhoods of Swansea, Riverdale, and High Park. Italian and Portuguese builders became more prevalent in the 1960s. They may have played a role as subcontractors on these earlier projects.

A recent documentary, Shelter, supports this theory for the origin of the Toronto Special and highlights the significant role Jewish builders played in the city’s post-war apartment boom. Real Estate Magazine quotes Allan Weinbaum, who in the documentary recalls:

“One of the great opportunities for everyone in that era if you wanted to get started in business was real estate … My parents and their friends would … put together a pool of money, they would buy up a property, a house or farm and they would flip it … They had a good intuitive feel for value and where the market was going. They just kept going and going and Toronto was a good place to do that in the ’50s.”

The Toronto Special does appear to have been a path to real estate success in Toronto for a few builders. Chaim Neuberger, a Holocaust survivor involved in building Toronto Specials in the Township of York, went on to make significant fortunes in the apartment boom of the 1960s and 1970s. In 2008, he donated $10 million to create the Sarah and Chaim Neuberger Holocaust Education Centre at the United Jewish Appeal campus in Toronto.

While there is not yet a decisive answer as to where the first Toronto Special was built and by whom, the story’s broad strokes are becoming apparent. The evidence indicates that by 1954 some most prolific builders of the Toronto Special were Jewish builders. They adapted contemporary design elements into a cost-effective, easy-to-build, multi-unit buildings that fit onto a wide variety of urban lots. This speculative real estate product circulated through the building industry. It was quickly adopted by Eastern European and later Italian and Portuguese builders who wanted to establish their own real estate businesses.

Correction: In an earlier version of the article, architect Daniel Parolek was incorrectly credited for coining the term “Toronto Special.”