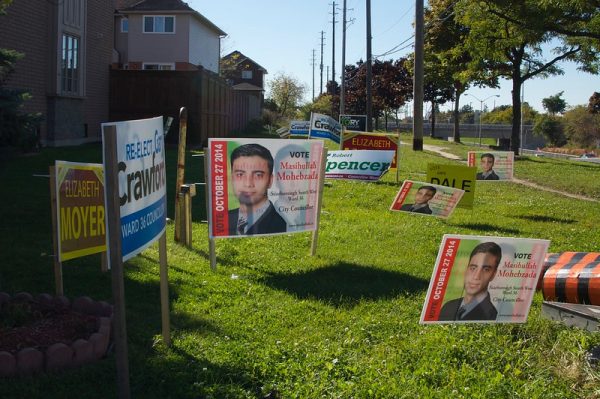 Yesterday was sign day in Toronto’s municipal election. Campaign workers spread out over the city to hammer signs onto lawns and leave signs for posting in apartment windows.

Signs supporting candidates are a time-honoured tradition in Canadian elections. But what is their role? Do they really make a difference?

I remember visiting England a few years ago in the midst of a national election, and being taken aback by the almost complete lack of election signs. Many seats in England were then considered “safe,” and so presumably the parties didn’t bother putting much effort, or funds, into those campaigns. But even in contested seats, there were not a lot of election signs. You’d barely know the next government of the nation was being decided.

I think that’s one of the most basic uses of election signs – reminding voters that there’s an election happening. I’ve seen complaints in Toronto in recent weeks along the lines of “you’d never know there was an election.” Once the city is awash in signs, everyone knows an election is happening. And the clashing signs – if there is more than one strong candidate – can lend a sense of drama and excitement.

In an era where there’s so much competition for attention, election signs can also be important for letting people know who is running. In provincial and federal elections, people are more likely to know the leaders of the respective parties rather than their local candidate, so signs can provide that local information. In municipal elections, without parties, voters may have no idea even what their options are – signs can at least let them know who is running. I’ve often particularly enjoyed the corner lots where the resident has allowed all the candidates to put up a sign – essentially providing an information bulletin on their lawn.

Can signs make a difference? I still remember Toronto’s 2003 city election – one of the most interesting in memory. Barbara Hall, former mayor of the former city of Toronto, was seen as the progressive standard-bearer in the election to replace the conservative Mel Lastman. City councillor David Miller was also running as a progressive candidate, but he was at first considered marginal and a potential spoiler. But on sign day, suddenly there were huge David Miller signs on people’s lawns all over the city. It announced that he was a serious candidate with serious support, worth considering. Of course many other factors came into play, but the signs were a start. In the end, he came from behind to win the election.

In their book Nudge, Richard Thaler and Cass Sunstein talk about how studies show that we are swayed by what our peers and neighbours do. Informing people that most people vote, for example, can increase the number of people who vote. Signs can operate on that principle – discovering that many of one’s neighbours are supporting a candidate can influence us to also consider supporting that candidate.

But signs can also be deceptive. The NDP has a strong core base of support and good organization, and in elections often gets a strong sign campaign going. But as often as not, despite seeing many NDP signs in a riding, the final vote doesn’t reflect the balance of signs, and the NDP comes in well behind. Conversely, when the NDP wins a riding, it didn’t necessarily have a lot more signs than when it lost. The winning margin comes from people who don’t put up signs.

Election signs may not be a reliable indicator of who will win. But, especially in a crowded field, they do help to show who is a serious candidate – someone with dedicated support and good organization. They can help narrow, or expand, the field of viable candidates for voters to consider. In an age of fragmented, mostly electronic media, they are a solid, physical way of conveying information and participating in an election. But perhaps their most vital contribution is bringing life to a campaign and enhancing the vibrancy of democracy.

If you generally host election signs, or have experience using them in a campaign, please share your insights about them in the comments.