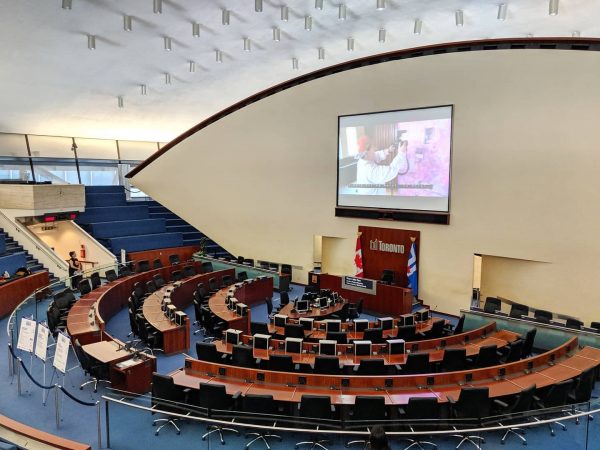 City Councils have a popular image of being beyond partisanship. Fiorello LaGuardia allegedly once said “There’s no Democrat or Republican way to pick up garbage,” which is quoted during debates about political parties and city councils. The argument goes that municipalities have the most visible service delivery – water, power, sewage, and solid waste, among others – and councils should be judged on that record, not on ideological posturing.

Putting aside the fact that no city government should take garbage management advice from New York, which stores mountains of trash in loose bags on narrow sidewalks, these questions are clearly ideological. David Miller’s decision to not break the garbage strike was an ideological choice about a worker’s constitutional right to collective action, and Rob Ford’s decision to expand privatized collection was an ideological choice about the efficiency of the private sector.

Almost every decision made at City Council has an ideological dimension, whether it be land use, taxation, social services, transportation, public space, or others. Local elected officials appeal to common sense, with paeans to community-mindedness or to bipartisan solutions, claiming these approaches to be non-ideological. The issue is, they’re absolutely ideological. An ideology is just a system of ideas, and appeals to gut feelings over interpretations of evidence, loosely defined communities instead of measured demographics, and glad-handing over partisan competition are all ideas that shape the world in particular ways.

The issue is that partisanship and ideology currently exist at Toronto City Council, but in opaque and inconsistent ways. There is an informal “progressive caucus” that meets on the Friday before council to discuss how to vote on the major agenda items. This is to counter the list that is distributed by the mayor’s office to his allies, which informs every allied councillor how they should vote. Outside observers wouldn’t know that John Fillion, who voted against front doors for secondary suites and was stridently opposed to rooming houses, is on that progressive caucus, but Josh Matlow, who tried reallocate the police budget and liberalize alcohol consumption in parks, is not. This is inscrutable to me, someone who worked for a member of that caucus for 4 years, and must be beyond inscrutable to voters.

There’s also a severe power imbalance between those coalitions. The issue is that the “progressive caucus” is entirely voluntary – there’s no whip, a parliamentary position which ensures ideological discipline. The mayor’s office does have a type of whip, which is executive appointments. If a given councillor doesn’t vote in line with the instruction sheet, they can lose appointments to prestigious boards and committees.

Some voters can try and piece this information together before voting. A lot of voters may remember that John Tory used to lead the Ontario Progressive Conservatives. But how many voters have seen pictures of Josh Matlow or Brad Bradford at Liberal Party events? One of them votes more left than some members of the NDP, while the other is close friends with the Mayor. The mayor himself has many Liberal party supporters. And do many voters know that Paula Fletcher used to lead the Communist Party of Manitoba?

Partisanship exists at City Hall, has meaningful effects on decision-making, and a responsible reform would be to formalize it.

There are many other arguments for parties at city hall, too. Parties increase information dissemination and competition, which are values that appeal to market fundamentalists. Parties can increase diversity and representation among elected officials, which appeal to progressive values. Parties allow upstarts to challenge existing hierarchies, either by joining the party and organizing, or by starting a new party, which can empower those who feel alienated by the current system. Parties won’t solve everything by themselves, but they give voters and organizers avenues to solve problems.

But what really matters here are the issues. The minister of municipal affairs has pitched the strong mayor system as a way to get housing built. And housing needs to get built in Toronto.

What would municipal parties say about that?

Vancouver and Montreal, Canada’s two other major cities, have political parties. Both cities also have housing crises. And both cities have political parties with various positions around the housing crisis. Parties like Projet Montreal and Forward Vancouver can run on their record of governance, and their plans for the future. Their opponents are running on critiques of that record, and plans for a new approach.

Our system favours incumbency bias. In this election, we have an incumbent mayor who on many topics is running against his own record, and is supporting candidates who fundamentally disagree with major portions of his platform. And because there’s no party able to run against him, he and most of his favoured candidates will likely win, and create a dog’s breakfast of policy.

Toronto needs political parties that can present real options to the voters, with a slate of candidates who will pass an agenda. Which individual candidate stands for radically changing our zoning rules? Which individual candidate stands for a public housing builder? And think of every other option on the ballot this year, whether it be property tax, policing, homelessness, public transit, washrooms in parks. These are ideological questions.

What do your council candidates stand for? You can’t get that information from a last name – voters need the ideological signal of party affiliation.

Anthony MacMahon worked as a planning and constituency advisor to Councillor Joe Cressy from 2019 – 2022. He’s also a playwright.