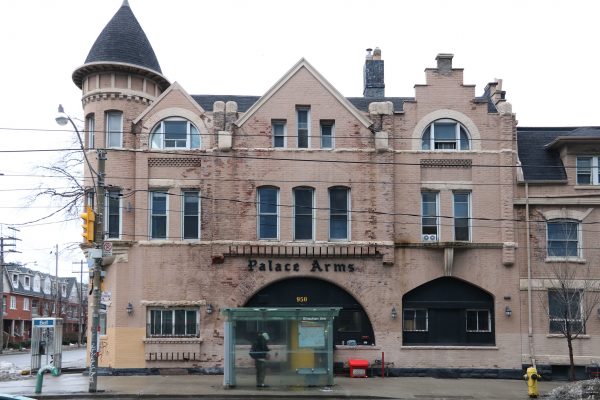 Toronto is a city whose residents are encouraged (or encourage one another) to dislike certain things, but who have also forgotten (or never really knew) the source of their animosity. Maybe other cities are similarly afflicted, but the combination of Toronto’s civic amnesia, and the astonishing persistence of certain urban myths, is especially pronounced when the debate turns to housing.

Exhibit A: apartment buildings inside neighhourhoods. Verdict: bad. Why? Once upon a time, the city banished apartment buildings on residential streets because they were seen to encourage immoral behaviour, especially among single women who may be living in them.

We profess not to worry about the conduct of single women living in apartment buildings anymore, but we still suspect that apartments in residential neighbourhoods are a scourge of some sort. New ex post facto justifications sprouted like deep-rooted weeds over many generations — impact on property values, noise, overlook, shadows, parking. Never mind that apartment buildings exist inside neighbourhoods in older parts of Toronto, and in basically every other big city on the planet. But for years, they were still seen as a sky-is-falling problem.

There are so many other examples: slab apartments (banned for largely aesthetic reasons); basement apartments (long seen as another form of residential blight); and, in much of the city, duplexes, triplexes, fourplexes, or any other type of house that dared to present two doors to the street — a rule of boundless idiocy which nonetheless remains a feature of the City’s planning laws. Why are we exercised about two doors? Who knows, but we are, or were.

Set against the peculiar tenaciousness of Toronto’s Victorian attitudes about the poor, the unhoused and those unfortunates who don’t own property, last week’s debate on recasting some of the city’s bedrock land use planning policies revealed a struggle not just among the members of this council, but also between the city’s striving present and its judgmental past.

Struggle isn’t exactly the right word to describe the debate at council, about which more later. Mayor John Tory’s housing action plan had two components — one, basically, a request for staff to lay out a strategy to add gentle density to neighbourhoods and mid-rise apartments to main streets, which, truth be told, is a file that’s been open and active in the planning department for several years.

The second was the third attempt to pass a bylaw legalizing multi-tenant dwellings across the city, and not just in the old City of Toronto and parts of Etobicoke, where rooming houses have long been licensed and regulated.

Parkdale-High Park councillor Gord Perks, in his speech to council, described the serpentine, slow-moving process that preceded this latest debate — years of advocacy tracing back to a lethal rooming house fire at the Rupert Hotel on December 23, 1989, in which ten people died. A Google search reveals that Perks has given versions of this speech many times, and his core message has been nothing if not consistent: it’s time to legalize rooming houses.

The inaction is due to some extremely stubborn misconceptions, and these go way back. Planning scholar Philippa Campsie, who has written extensively about the history and regulation around these dwellings, points out that until the 1940s, rooming houses — a.k.a. lodging houses — were neither unusual nor problematic, nor dwellings of last resort.

Unrelated people lived for extended periods under one roof and shared common facilities — bathrooms, kitchens, etc. — without arousing the ire of municipal officials or the moral condemnation of the city’s churchgoers. But, she explained in her 1994 history of rooming houses, the growth of the post-war suburbs and the development of high-rise apartment complexes finally provided many lodgers with an opportunity to buy or rent their own premises.

“Rooming houses,” Campsie wrote, “became the housing of those who had no other option: students, the working poor, or the unemployed. For students, rooming houses were a temporary expedient; for the poor, they were often a permanent home. Still, they were an accepted feature of the urban landscape, necessary if unglamorous, and a decided cut above the flophouses where men on skid row paid a dollar or two per night for a dormitory bed.”

Through the 1970s and 1980s, rooming houses came to be associated with politically triggering shorthand — “flop houses,” “skid row,” and the moral panic about the proliferation of “bachelorettes” in south Parkdale. The media dutifully covered the steady stream of rooming house fire stories and the inevitable deaths of poor tenants. But the political take-away from this sensational coverage was exactly backwards: instead of improving conditions through licensing regulations, municipal politicians outside the core found creative ways to block this kind of housing.

What’s more, the media characterization glossed over the reality that countless Torontonians have lived in shared houses for various durations, motivations, and life circumstances without incident, specifically because they were an affordable form of housing.

In a pair of fairly recent studies for the University of Toronto’s Cities Centre (here and here), Campsie unpacked the exquisite political complexity of earlier efforts to legalize multi-unit dwellings across the amalgamated city — a tale that consists of endless definitional permutations, strenuous discussions of minutiae like parking regulations, consultations held and later ignored.

Her analysis stresses a point that rooming house foes have always chosen to ignore, which is that the Mike Harris government’s decision to gut tenant protection laws and kill affordable housing programs drove demand for multi-tenant housing, as did other factors, like the dearth of student housing on the campuses of the city’s colleges and universities.

“Rooming houses, whether licensed or unlicensed, present an important question of human rights,” she noted in a 2018 paper published ahead of one reform effort. “On the one hand, the current licensing regime, where it is in force, gives homeowners considerable control over the lives of renters in their neighbourhoods. On the other hand, the lack of licensing in some parts of the city creates spatial inequities: shared housing in such areas is not subject to safety inspections. Resolving these issues will not be easy.”

Campsie also pointed out the grandest and most pungent irony of all, which is that Ontario planning law has long been premised on the principle that zoning and land use policies regulate form, not tenure. Except, it seems, when it came to places where unrelated adults were sharing bathrooms and kitchens. In those instances, we blithely regulated people.

Which brings me to last week’s council meeting. The current political context was crucial, of course: during and after the election, Tory promised to crank up housing production, and convinced the provincial Tories to give him anti-democratic powers to get it done. As the old saying goes, you have to break a few eggs to make an omelette.

There was a critical step that preceded last week’s rooming house debate, although its significance didn’t strike me until after the fact. Amidst the bloviating about Bill 39 and the mayor’s new super-powers, 15 councillors from all points on the political spectrum signed a letter saying they opposed minority rule. Perks himself wrote to Tory demanding a debate on the use of these powers. With the benefit of hindsight, those letters sent a clear message to the mayor: don’t assume you can rely on a rump of left-leaning councillors to deliver the politically contentious aspects of your housing agenda.

Tory was being put on notice: if he wanted reform, he was going to have to lean in and get it done in the old-fashioned way, which was through persuasion rather than fiat.

During last week’s rooming house debate, Perks and deputy mayor Jennifer McKelvie orchestrated the compromise that got the bylaw across the finish line — a rider about parking minimums for new multi-tenant dwellings in the inner suburbs where they’d been banned.

In his speech, Perks name checked several suburban councillors who had publicly advocated an end to the ban. Council’s left and right met in the middle — a compromise achieved not with the phoney legislative muscle provided by Bill 39, but through the art of the deal.

The trade-off, notably, puts the city back in the business of regulating form, however imperfectly, rather than tenure — which is the bedrock principle of Ontario planning law. And, more importantly, it begins to remove the stigma, cruelty and precarity that our housing crisis inflicts on tens of thousands of Torontonians.

I don’t know if Tory — who is arguably one of Canada’s most accomplished political coasters — grasped the gravity of what happened. Not just an historic decision about who gets to live in the city, but a vote showing Tory that local democracy can still work, in spite of his best efforts to wreck it. Perks handed the mayor a Christmas present for the ages. I hope someday he will return it in kind.