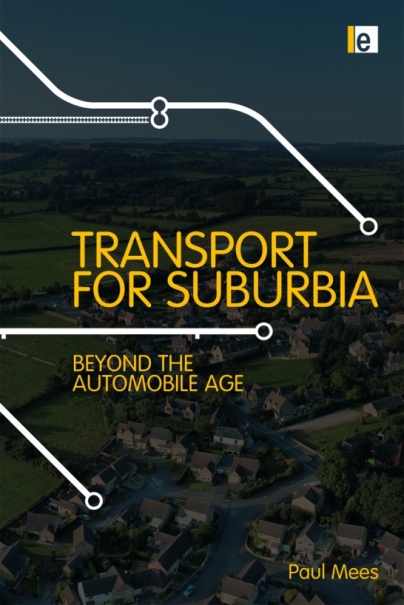 There are certain books that I know I’m going to enjoy as soon as I see the title. Paul Mees’ book Transport for Suburbia: Beyond the Automobile Age was one of them. Just the fact that the author uses the words “automobile age” like it was some sort of passing fad made be anticipate a good read. What I didn’t expect was to have a couple of my beliefs about transit challenged.

Mees has somewhat of a reputation as a rabble-rouser – a former lawyer turned academic who left the University of Melbourne after it found him guilty of misconduct for making “derogatory and insulting remarks”. Mees had harshly criticized both the director of public transport and other government officials over a supposedly independent consultant’s report that included sections copied verbatim from a government memo. However, allegedly calling them “liars and frauds” definitely didn’t endear him to the university. Mees switched academic institutions and is now a senior lecturer in transportation for the Royal Melbourne Institute of Technology in the the school of global studies, social sciences, and planning.

The author sums up his book nicely in the opening chapter: density is not destiny. In other words, high population densities are a prerequisite of a well-functioning public transit system that also decreases auto dependence. This argument alone made me take notice. Don’t we need to get have more people living along transit corridors to justify transit investments? Aren’t many suburban areas too spread out and unpopulated to have frequent transit service?

No, says Mees. While density has an impact, “the effect of density is outweighed by other factors unless the differences in density are huge.” While he is not against a more compact urban form, the author argues that this will not automatically produce a big shift in mode share away from the automobile. Rather, the attractiveness of the various transportation modes is the key factor. As an example, while British cities have higher densities than many European cities with successful public transit, their transit mode share is much lower. And although Greater Manchester has double the population density of Greater Montreal, transit mode share is higher in the latter.

And there is almost no minimum density under which public transit doesn’t make sense, as long as the system is designed well. Mees makes frequent mention of Zurich’s amazing transit system, where towns with a minimum population of 300 (!) are provided with regular-interval, all-day public transit service. One town, with a population of 1,000, has train service twice an hour from 6am to midnight, every day of the year.

So why does Zurich system work so well? The integrated pulse-timetable, or integraler taktfahrplan, appears to be the answer. Introduced in 1972, all rail lines run at the same frequency, with different routes arriving at key transfer points at the same time. This allows transfers in any direction and at all hours of the day. The system has been so successful that it was rolled out across Switzerland in 1982. The result has been a reversal of ridership declines, such that 15-minute service on major corridors will soon become reality. However, Zurich hasn’t yet introduced disincentives to driving such as charging more for parking or for the use of roads. Charging more to drive is a tough sell, even in Switzerland.

Another important point that Mees addresses is the network effect, which basically says that a transit system built around transfers works better a system that tries to avoid them. I’m not sure how the one-seat ride gained so much prominence in North America, but the idea that riders should not have to transfer unless they absolutely have to has made for some very strange routing decisions in many cities. It is far easier to take a one transfer ride if the service is frequent enough.

Vancouver’s transit system is cited favourably many times in the book as one that works very well. The author notes that “Vancouver has reduced journey (to work) times by promoting congestion, while other Canadian cities increased them by planning for higher speeds!” While I agree that congestion is one reason for reduced journey times, the planning department at the City deserves the most praise for helping create neighbourhoods in the urban core that people want to live in. By building an attractive city, it has dampened the appeal of the outer suburbs for many, keeping them closer to work.

Of course, outside of the City of Vancouver, public transit infrastructure is still insufficient. The one question I wish the author had addressed a bit more was how Switzerland funds such an amazing transit system, even for smaller towns. While TransLink is on track for a record year in ridership, even surpassing last year with its surge of Olympic visitors, a lack of funding has prevented it from building the Evergreen Line or any rapid transit south of the Fraser.

But this book should be an inspiration for transit planners, since it seems that good public transit in suburbia (and smaller towns) can be created through better planning. Definitely more challenging, but possible.