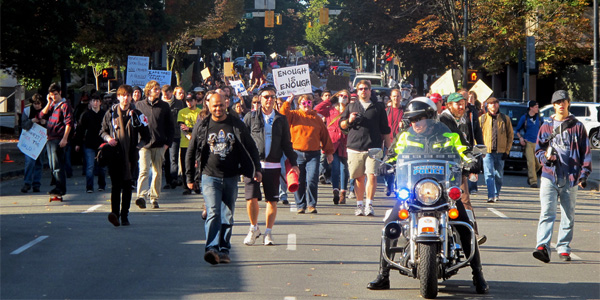 The City has just posted notices asking Occupy Vancouver campers to pack up and leave, but if last night’s Last Candidate Standing event was any indication, OV is not about to disappear quietly. Indeed the event, located on the same block as OV, was subtly occupied in its own way by people of all ages who do not at all resemble their media caricatures. The key topics of the night revolved around financial issues: housing affordability and campaign contributions from developers loomed large. The three finalists pooled their final question time (supposed to be about what big change their vision would lead to in 20 years) into a group speech and moment of silence for Ashlie Gough – then a standing ovation that even the remaining NPA candidates couldn’t say no to.

Occupy Vancouver is not, strictly speaking, under the umbrella of issues Spacing normally covers – at least not in its critiquing of large scale economic systems and power brokers. Should it somehow survive and develop toward a Freetown Christiania or Black Rock City, our skills will be more at home pretentiously assaying the vernacular tarpaulin architecture, arranged in the organic tradition and trapped in the aesthetic bifurcation between pastiche and bricolage – with a patina of both hope and despair.

The encampment has, however, found itself drawn into the local election cycle. This not solely by choice: Occupy Wall Street just happened to spin off into countless other cities just as British Columbia kicked off the only major municipal elections in Canada this year. Unfortunately, using the movement as a political pawn is an infinitely more effective opposition strategy when you’re – sorry Randy Helten, Gerry McGuire et al. – the current mayor-in-waiting with only weeks until the polls. Even Rob Ford in Toronto hasn’t yet decided on a plan.

To no great surprise, Suzanne Anton moved to direct city staff to give a one week ultimatum, a motion she knew nobody currently on council would dare second. There are two possibilities here. One is that she believes that an ultimatum would quickly rip off the proverbial band-aid with the least pain. The other would be that she expects that doing so would actually cause bleeding, bruising, and inflammation, but knows that an election is coming up and she isn’t the one in a position to have to follow through. I tend toward the latter, which is likely electorally advantageous for her no matter what happens.

If Mayor Gregor Robertson doesn’t act, acts slowly, or in any way fails to bring down the iron fist, the NPA wins some votes off Vision’s right flank and sees their base energized. On the other hand, if Robertson does anything more than suggest a few safety changes or criticizes the protest, some COPE allied voters are liable to walk away. In other words, the pragmatic approach he’s adopted so far walks that line, probably favouring his left at the expense of his right – but abandoning that approach isn’t going to win more people back than will be lost from the other side.

We seem to be headed toward finding out. Robertson, never particularly a fan of previous tent cities, has been slowly softening in the face of an unwinnable situation that he didn’t initiate. Saturday’s death seems to have pushed him closer yet to an Anton-style ultimatum (he’s directed city staff to give everything but a timeline), which I can’t forsee going well.

As a Berkeley alum, I’ve taken in my share of protest marches, one of which trod the five miles to the very same square Occupy Oakland has renamed after Oscar Grant. I’ve also seen overzealous administrations send in waves of riot cops to kick a few kids out of a minor classroom, creating a standoff with thousands of students and townies who didn’t particularly appreciate having barricades rammed several feet into the pressing crowd.

The bottom line is that peaceful protests do not tend to end peacefully unless they are allowed to run their course, generally until the most honestly engaged citizenry have willingly packed up and gone home. Afterward, the troublemakers – and by troublemakers I mean specifically those who hang on to the main group for their own ends – will helpfully separate themselves for easy identification and arrest. It does not seem we are close to reaching that point.

The current predicament is a product both of the Occupy Movement’s lack of a defined endgame and a growing impatience among the political establishment. There does not seem to be room for a compromise solution, aside from allowing the camp time to spread out its tents, but there’s the rub: closely spaced tents indicates there are still plenty of people, three weeks in, to resist any attempt at removal.

The energy is not dissipating as much as it may seem. Gough’s untimely death may be a convenient excuse to step in, but sadly the overdose statistics from the Downtown Eastside indicate that’s she’s hardly the first in Vancouver to have met the same fate since the encampment began – and to no great media outcry and no calls from action from the city government. That should a municipal election issue for Spacing to cover, but it takes only a single sentence to point out that the issue hasn’t seen much airing as of yet.