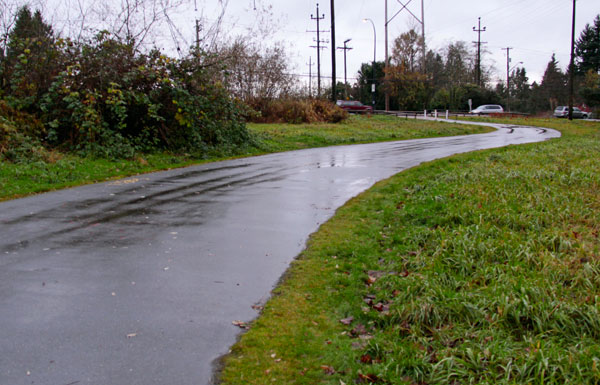 Just half a mile from downtown Surrey: a completed part of the Quibble Creek greenway meanders to 100 Avenue.

Greenways are still rather new in city planning. The term was coined in 1995, and the idea of planning urban pathways that don’t pander to the automobile still seems fresh.

The City of Surrey has been developing a network of greenways. With this in mind, the city has an advantage over other municipalities insofar that there are several undeveloped right-of-ways under some of its power lines, as well as existing informal footpaths running along creeks and behind developments.

As it stands, the City of Surrey’s Greenways master plan – last revised August 11, 2011 – is more extensive than people often think. It includes 31 greenways, either in existence or planned. 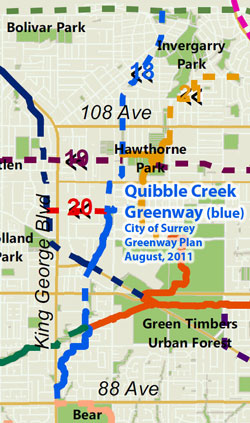 The Quibble Creek Greenway looks like it will eventually run from Bear Creek Park, along Quibble Creek up to what looks like will be the new South Fraser Perimeter Road along the river. There is a greenway called Riverside planned along that route too, running west to east, just south of the Fraser River.

Quibble Creek is number 22 on the city’s greenway map.

I hate to quibble, but we always called this creek Bear Creek as a kid – it runs through Bear Creek Park  – and the City’s bike map labels it Ursus Creek. Turns out I had it all wrong as a lad: Bear Creek starts to the West and meets up with the Quibble about half a block South of 88th Avenue. The Quibble has a more North-to-South route.

The Quibble Creek Greenway includes a riverside footpath, an short area that follows the road, and sections that are wide and paved, separated from any road traffic. 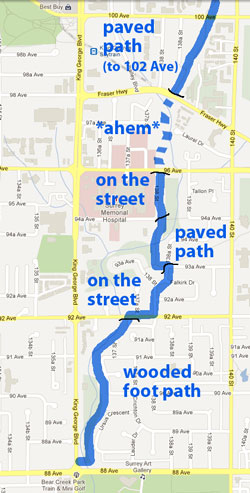 Start on King George Highway, about half a block north of 88 Avenue. A sign lets you know that the Quibble Creek Greenway is cleaned by the Port Kells Art Club. Thanks guys! That’s a long ways to come to pick up garbage. A narrow gravel path meanders North to 92 Avenue following the creek fairly closely. It’s not wheelchair accessible or great for street bikes, but is easy to follow. You can see how this section closely follows paths picked out by generations of kids, or perhaps even older trails!

At 92 Avenue the trail ends. Turn right, and then take the second left at 138 Street. It’s marked with the green bike path lanes. You may see a group of older men playing cards on the sidewalk as the street turns. Resist the temptation to join in. These guys are undoubtedly pros and you’ll just lose your shirt. Instead, Hook up with the paved area under the power lines and follow it to 96 Avenue. If you go East on this greenway you can follow a straight line through Green Timbers as far as 168 street.

But we’re not going East. Go North. The paved area follows the power lines, crosses a creek, but stops behind the hospital, on a continuance of 138 Street. That’s it for this part of the greenway, but if you’re adventurous there’s an unpaved parking lot on the other side of 96 Avenue that allows you to continue following the power lines to within spitting distance of Fraser Highway.

A small creek (a tributary to the redoubtable Quibble?) blocks further progress, along with some blackberry vines. If you preservere you can traverse this inconvenience (perhaps with a dampened foot if you miss your step) and pick up the paved greenway on the other side of Fraser Highway.

This continues under the power lines to 102 Avenue.

And there it stops. The power lines create an obvious clearing for where the greenway can continue, up to the Fraser River, about 2 miles away. But that will have to wait for construction. The city does not own or have the right of way for various sections, including the obvious bit in between the two paved parts.

Once completed the Quibble Creek Greenway will give a pleasant North/South route from Bear Creek Park to almost the river. As it is currently it’s a series of incomplete separate foot paths, roadway shoulders and paved bike/foot pathways. To wax poetic, we can see this as a microcosm of the greenway system as it stands today: incomplete, but a with lot of promise. The powerline paths, in particular, will be a real gem when completed. Even now, there are always people on the existing short sections: walking their dogs, strolling with partners or kids, or using it as a greener path from here to there.

Born and raised in Surrey, Don Schuetze has returned to the land of his youth after about a quarter of a century elsewhere. But do you ever really leave? Don works for a media company in Vancouver as a production hack, schlepping together print and online products. Reach him through his half-done site http://www.southofthefraser.com which is all about, wait for it… Surrey.