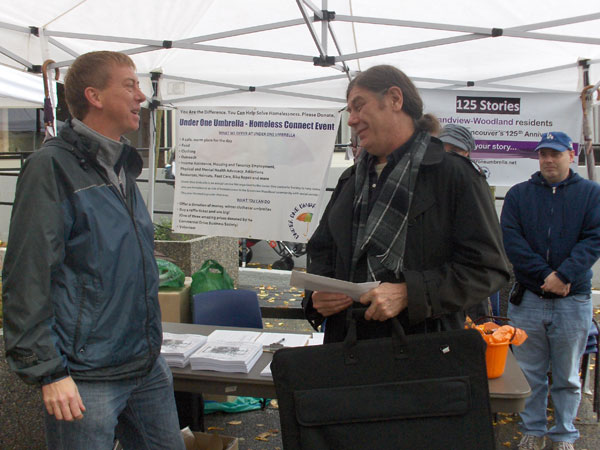 How well can you really know any neighbourhood?

Yes, one can recite the history, the dates and times of developments, the influx of immigrants and the changing economics, but those sorts of official histories conceal something much deeper in the stories of the individuals who call a place home, stories you’re likely to never hear unless you know someone personally.

Those stories have been made much more accessible in the Grandview-Woodlands area thanks to the work of the Under One Umbrella society. With the help of a grant from the City of Vancouver – part of the city’s 125th anniversary celebration – the group has put together a compilation of diverse stories from The Drive, titled Voices From Grandview Woodland.

I sat down with Damian Murphy, the coordinator of the Under One Umbrella society that launched the book, at the Prophouse Cafe across the street from their offices on Venables Street, and sat in rapt attention as he explained the project.

We wanted to have a legacy aspect so that future people could share the stories as well, so that was the idea of the book, so that down the road, in the future, there would be a written reference about the project that people could access any time, he says.

A lot of the stories are little slices of life, the smallest thing, but it gives you an idea of how people lived or what life was like at the time. Like the story of the woman who used to run home from lunch, but a train used to go through down by Vernon, so the trick was to beat the train so you could cross the tracks and you could get home for lunch and back in time, because if you were too late you’d have to wait for this train that would go by forever and you would miss your lunch. Little things like that.

Another senior wrote about Strathcona Park, how they used to call it The Flats and it was just a big mud field. There wasn’t much there. Then the group from the seniors we met at the Lion’s Den, they were really active in the 60s, early 70s, and they basically were responsible for the creation of most of the little parks you see around here and Britannia community centre, so we got to meet the people, by and large women, who were responsible for creating these really important parts of the community today.

One such woman is Jean Russell, 98 years old now, who has spent most of that time since the 1940s on the Drive. With three stories, she shares her life just as she might tell it over coffee in her kitchen, still living in the neighbourhood today. She spent 40 years volunteering and served on the board of Britannia, and received a silver bowl from the city for her efforts. Only six people in the whole city got one and I was the only one who wasn’t a university graduate. I was just a little thing from Grandview Woodland, she writes. Damian still goes to visit, he says, coming over to visit and bringing groceries when she needs them.

The pioneers of the area get their due, which tells the stories of many of the area’s street names. Clark Drive is named after one of the area’s first landowners, Ephraim J. Clark. It was summer homes for people from New West, tells Damian.

Just thinking about at first and commercial where the Il Mercato is, up until like 1949 or 1950 or so there was this school on the corner, he adds. We found out a lot about different places we would recognize today and have been there since we grew up here, and in fact they were different sometime in the past, such as that school.

Barb Parrot explains how she and other teachers and parents at Sir William Macdonald Elementary School organized and protested to get more support staff at the school in the mid-1990s, at one point camping on the lawn of the school board offices.

It’s not all history, though. There’s an ode to Joe’s cafe. There are little details of everyday life. The diversity is striking, acting as a little window into other times, other cultures, other paths, and written by people of all ages.

The area’s homeless tell their stories, including people such as Melanie Konkin, who spent two weeks living on the streets in the area, who writes I can’t say my memories of the neighbourhood are fond, but they’re memories still the same.

One of the most touching stories is the last one, squeezed in at the very end after the deadline had officially passed, but Damian couldn’t turn it down. In that story, Peter Worthington writes an ode to his husband, Glen Caponero, the owner of Figaro’s Garden on Victoria Drive, who killed himself earlier this year. In it, he shares the pain felt by those who he left behind, and all the parts of Glen’s life that still inspire him. Having walked past that store countless times myself, it’s hard not to see it differently now.

The pride in the neighbourhood, says Damian, is palpable in most stories. Teresa Diewert writes that the neighbourhood taught her what it means to be part of the human community. Damian says people jumped at the chance to tell their story.

The book launched Oct. 22 with a street festival at Britannia community centre, along with several other community projects paid for by the city’s 125th anniversary grants. About 500 copies have been printed and so far about 250 have been sold so far, including 150 at the launch alone. All the proceeds from the book, $20 each, go to paying for the Under One Umbrella group’s homeless connect event, planned for March 2012.

The group has been organizing the event since 2007, when about 20 service providers attracted 100 people to the Friendship Centre gym. Since then it’s grown, and now is hosted at the Maritime Labour Centre on Triumph Street, with services from housing to acupuncture, and is timed for the spring, about six months after the city’s homeless connect event in the fall. The idea, explains Damian, is borrowed from San Francisco, and provides a sort of one-stop shop for homeless people in the city to connect with services.

The group is considering a second run of printing of the books if the remaining books sell out. If so, they may also include more stories, says Damian.

It would take a lifetime to actually capture all the stories from people, he says.

For more information on what the group does, check out their website at underoneumbrella.net. Books are available through the society, and Damian has plans to expand that soon to include the Community Policing Centre and possibly other local businesses.

Tessa Holloway is a Vancouver journalist with an interest in public space.Â  She also writes for the North Shore News.