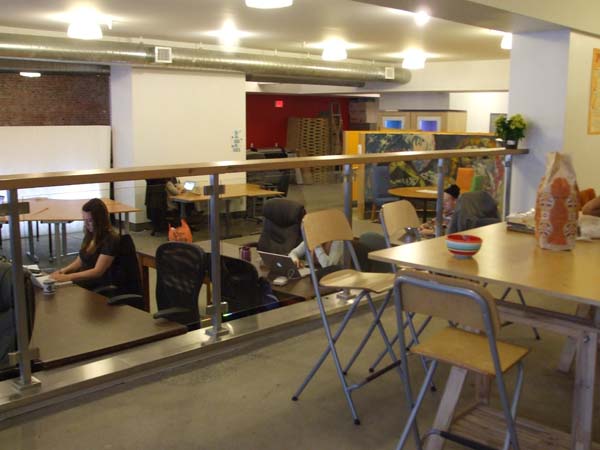 Imagine arriving to work at a downtown historic building, where your workspace has high ceilings, brick walls, and huge windows. You can meet with clients or have informal discussions with colleagues working in industries as diverse as software development, photography and green building; the rest of the time you work at your own desk or a hot desk space. Need to develop new marketing strategies for your fledgling business or learn strategies to foster social change? Just sign up for one of the many workshops offered at the office.

HiVE Vancouver is an innovative shared workspace that fosters individuals and organizations in the sustainability and creative sectors. It’s part of a growing trend worldwide: technological developments have made working in virtual space common, and doing consulting work for multiple clients has become a widespread practice as organizations try to keep their costs down. But for small start-ups, non-profits and individual consultants, trying to find affordable office space has become increasingly difficult. Shared spaces mean shared amenities (like meeting rooms, phones and kitchens), a real plus for those that can’t spring for the overhead costs of their own offices. HiVE members have a choice of a dedicated workspace (starting at $475/month) or a hot desk space (monthly plans range from $25/month for five hours to $350/month for unlimited hours). As a non-profit, HiVE uses its member fees to lease and improve the space.

But the HiVe is about more than just sharing space: members are “a community of change-makers” who thrive on collaboration, fun, diversity and social responsibility. HiVE Vancouver modeled itself after Toronto’s Centre for Social Innovation, which opened in 2004 with the idea that collaboration on the complex problems facing society could produce better solutions. The Centre’s founders merged the ideas of co-location (different organizations merely sharing space), community hubs (shared spaces providing direct services to their members such as job training and workshops) and social innovation. Toronto’s Centre is an affiliate of the Hub Network, a social enterprise working across 30 cities and 5 continents.

HiVE Vancouver opened its doors in Gastown last June with 33 permanent desk and a dozen hot desk members; less than a year later 50 companies and 100 members work out of the space. Eesmyal Santos-Brault, an inventor and social entrepreneur with a background in green building, and Jeremy Murphy, an urban planner and facilitator, were the project’s co-founders. Santos-Brault had already launched two successful social enterprises, Open Green Building Society and Vancouver Design Nerds, while Murphy had been involved with The Hub in Halifax. After deciding Vancouver was ready for “some sort of sustainability-creativity hub”, the two quickly gathered a dedicated group of volunteers who formed a steering committee and helped develop a common vision, feasibility study, and business plan.

“Ultimately for big projects like this, you have to give up your control over the vision, because it becomes very much a collaborative project,” says Santos-Brault. “There’s no way I could have done this by myself. But once we created a shared vision, it was a lot easier to get the buy-in from everyone to make it happen.”

VanCity helped fund the initial feasibility study and business plan. Founding members, including workers at Santos-Brault’s green building firm Recollective, contributed to a deposit on the space on the second floor of 128 Hastings Street West. Recollective also helped finance renovations and co-signed the lease. Renovations cost more than anticipated and the HiVe still hasn’t secured funding to make its second-floor space accessible, but less than a year after opening it has almost broken even.

“The biggest challenge has been that we’re a new business model and a different way of doing things,” says HiVE manager Nicole Jasinski.

“Just the fact that we were all volunteers was difficult,” admits Santos-Brault. “We’re doing this off the side of our desk, and we’re all super-busy people anyway. So just making the time to do this was stressful, like at one point we were meeting every week. It cost a lot more and took a lot longer than we anticipated.” 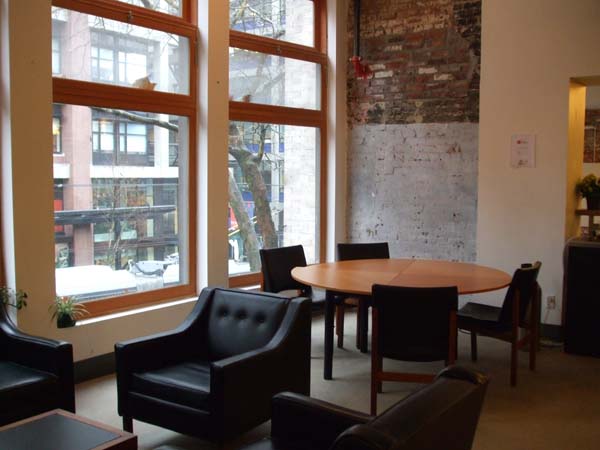 Ernest McCrank, who works in product development, industrial and environmental design, was one of the first permanent desk tenants when HiVe Vancouver opened.

“I was really taken by the energy of it, and the community aspect was really nice,” he says. “I was working out of a home office, and I was feeling the absolute limitations of it. It’s just great to be near other people doing great stuff. You get exposed to so much more, which I think really feeds anyone’s work, whatever they’re doing. It changes the conversations that you’re having with clients.”

“We’re actively looking at ways that HiVE members collaborate…it’s like a business ecosystem, and how do you get the parts of the system to work together?” asks Santos-Brault. “We’ve also already seen a lot of collaboration benefits, like members referring clients to one another and working with each other on projects.”

“I like the bike friendly atmosphere and the chats over tea in the kitchen. But it’s also a good place to get into the flow of hammering out emails and being productive,” says Peter Holmes, a photographer and HiVE hot desker.

Like Holmes, many members still work out of home offices, studios or coffee shops. This can create problems—did you remember that important file you wanted to work on? Can you connect to it remotely? But despite the challenges that can arise from working in a shared space, members seem happy to work through any minor problems that come up.

“There’s an underlying theme where people discuss what’s valuable or meaningful to do. It’s very different from when you’re all working in the same company where you’re just making sure that everybody gets paid, that there’s profits. I feel far more optimistic working here, with all this diversity, than I ever did working with a bunch of people with a common goal that may have been insular and doesn’t have much opportunity for free thinking,” says McCrank.

“It’s all about the people, definitely. It’s just such a crazy magnet for such interesting people. I’ve been introduced to people that I wouldn’t have access to otherwise. You’ll walk through the kitchen and somebody’s talking about electromagnetic reactors or something I don’t know anything about, and they’re talking to another member who works in yet another industry. But somehow there are issues of overlap, and that’s really exciting,” says Jasinski.

She’s not kidding: on a recent Friday afternoon, as members gathered in the kitchen after work for the weekly TGIF, the conversation ranged from sustainable agricultural practices to measuring the GDP to the double-edged sword of social media. Recent events at the HiVE have included a workshop on start-up and growth resources for small enterprises, another on 3-D printing for designers, and a training session on data management software for non-profit employees. Santos-Brault notes that there is a scarcity of affordable space for community events in the city; in February, the Canadian Association of Planning Students rented HiVE space for a social event during its annual conference.

HiVE Vancouver has responded to a growing need: more collaboration and community in a labour market that has led to increased isolation and spatial dispersion. As its members juggle contracts and clients, the HiVE provides both an energizing atmosphere for project development and a collective understanding of the pride and perils of socially progressive work.

“Eventually, it happens,” says Santos-Brault. “You have to talk about your dreams and your ideas, and you’ll meet other people who can play a role. I think the HiVE has a greater purpose to help achieve the City of Vancouver’s Greenest City and Creative City targets. So I feel a real alignment there…we’re doing something with purpose.”