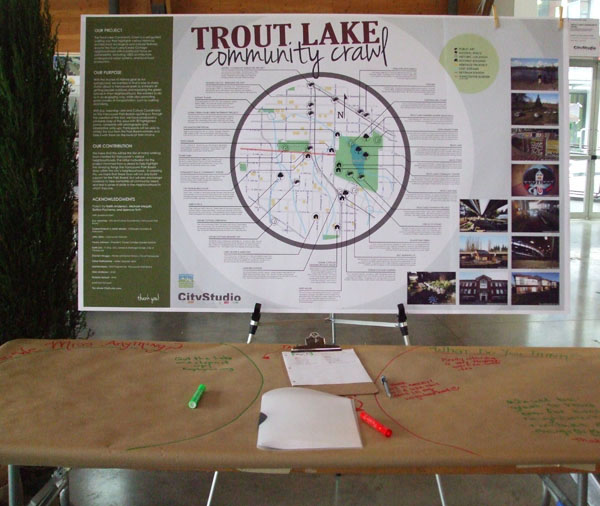 “When have you had your most engaged life experience?” asked Janet Moore and Duane Elverum.

A rapt audience sat in silence for ten seconds.

“No one ever says they had their most engaged experience in a classroom, or at a computer,” Elverum said. “Typically it’s when they’ve been connecting their passion with their work, often it’s outside, they’re often sharing a struggle with others, working with people to accomplish something they couldn’t otherwise.”

Two years ago Moore, Assistant Professor at Simon Fraser University’s Centre for Dialogue, and Elverum, Assistant Professor in design at Emily Carr University, asked this question at a Vancouver Design Nerd Jam in Vancouver. They envisioned a collaboration between the City of Vancouver and postsecondary students, allowing students to work on long-term real-world projects. The idea quickly gained traction at the City, which had just launched its Greenest City 2020 Action Plan. Greenest City Planner Lindsay Cole asked Moore and Elverum to present their idea to the Mayor’s panel. With strong support from the Greenest City team, CityStudio was launched in September 2011. 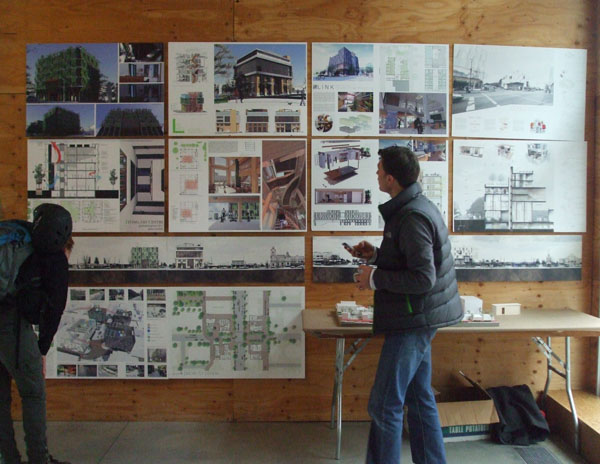 Projects designed by students in the partner courses.

Moore and Elverum have taught together for seven years. Every year, students would come to their offices with the same two concerns: “They want to save the planet and they want to earn a living.”

“Rather than being stuck in a lecture hall all day listening to the prof talk to you—or talk at you—you get to engage in collaborative learning. And you get to work with city staff on projects that add real value to the city,” says Spencer Toth, an SFU business student who spent this semester in CityStudio.

Students learn quickly how to work in groups and resolve conflicts, showing the influence of this semester’s focus on dialogue. They work with City staff developing projects that could be implemented: the Long Table—one of last semester’s group projects that imagined community conversations around a table—ended up with students hand-milling a donated tree and building a 30-foot table that is now circulating to community events.

A project begun by a group of students last fall is currently being realized as a new group of students works with Cole on the City’s Streets to Parks project. This spring, they have organized and facilitated an open house on the project in the Mount Pleasant neighbourhood using dialogue skills they developed in class.

“Here’s the thing,” Elverum says, “The planet is burning…and most institutions are blunt instruments to address the seriousness of this challenge. The City of Vancouver has stepped up and has said, we are going to address this challenge, and we’re going to put energy behind it in a way that no other city in the world has ever tried. The Greenest City Plan is one of the most ambitious environmental stewardship programs in the world. When you tell that to a student, you can just see their eyes open up, and their heart opens up, and they need to be working on this project.” 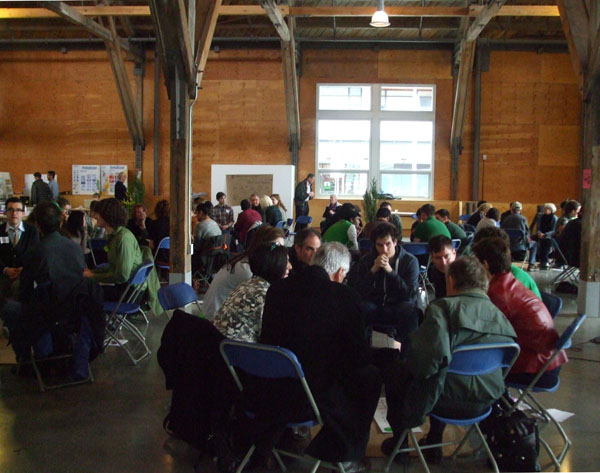 Students leading community dialogues at the Open House event at the Salt Building in the Olympic Village.

As word of CityStudio has spread, visitors have become common for the core students: when I dropped by the studio, Elverum casually mentioned that this semester they have hosted forty-four experts in sustainability, urban planning, and other areas.

The students divide themselves into teams of hosts: the group who is hosting must do their research and distribute biographies to the rest of the class, and everyone comes prepared to engage in dialogue. They promote their own work through posters advertising CityStudio events and well-designed reports detailing their projects.

Most students in the core studio acknowledged that they had no idea how much work they’d be doing in the program, and struggled to adapt to the workload at first. But without exception, they found it to be much more rewarding than their other courses.

“One of my favourite things about it is you have a sense of responsibility—it’s giving students the opportunity to work on real projects,” says Nicole Jahraus, a fourth-year student in Global Resource Systems at UBC. “It’s a challenge working towards a deadline…but it’s not like handing in an essay. You can see it has more longevity than that, so that’s a really exciting thing.”

“We don’t even think about grades anymore. It’s about beating your personal best as opposed to some general standard that’s applied to everyone,” says Becky Till, an SFU geography student. “I think you’re actually learning to be an entrepreneur, like what needs to be done and what you can do about it…I feel like I can walk away from this and make a job for myself.”

As students gain real-world experience and develop their communications skills over the semester, they each discover the unique talents that they can bring to sustainability issues and learn how these can be applied to solve existing problems.

“One of the most interesting and difficult challenges as a teacher that I have—and Duane has—is to get them to follow the passion that they love and can’t stop reading about, and connect it with things that are already happening. Because everyone loves creating their own idea, right? But somebody’s probably already thought of the idea and gone through it. So it’s challenging as a teacher to get them to work on an idea and then find all the people who are working on that,” says Moore.

“Students are capable of far more than we think they are. And the universities struggle, for all these reasons of budget and faculty time and class size, to engage students in their personal capacities. What we’re trying to do is match students’ passions with credits…It’s their passion. We’re just trying to guide them,” says Elverum.

CityStudio extends beyond these twenty students: Moore and Elverum have encouraged the development of partner courses at the six post-secondary institutions. Each semester, interested professors apply to become partners, “pointing” their course content and assignments at the same Greenest City Goal.

The result is over two hundred students per semester working on projects in areas as diverse as architecture, business, performing arts, and applied science. All the participants meet twice a year to discuss their projects: on March 31st, the CityStudio Open House in the Olympic Village drew hundreds of people, including Mayor Gregor Robertson. 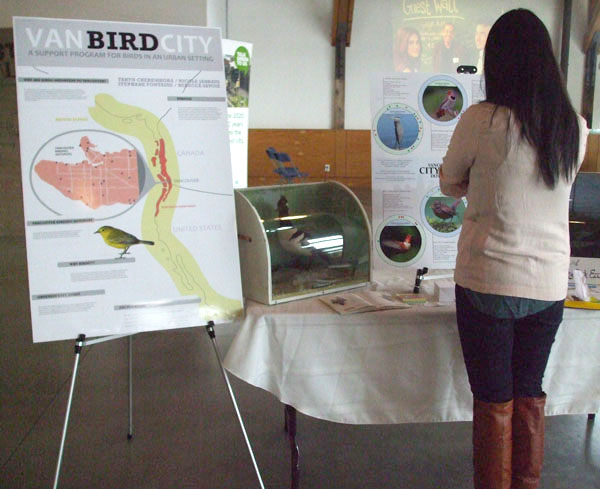 CityStudio’s co-founders are already thinking about how to enrich the program and extend it to more students: perhaps one-week summer camps or streamlining projects under themes such as zero waste.

“Our goal is to replicate ourselves, all over the city and the world, and share best practices in order to have multiple groups like this working simultaneously,” says Elverum.

“When you have this kind of time with students to think about what do they love, what do they want to do, how are they going to make a difference in the world, it actually starts to happen because they’ve had the time to reflect, and think, and work. We do a lot of work on project definition and problem framing, and that’s graduate level stuff that people don’t even get in their graduate programs because they are too big and people are too busy,” Moore says. “That kind of attention has a massive impact on students. You’re going to see these students in the future.”

For more information on CityStudio, visit their blog or main website.