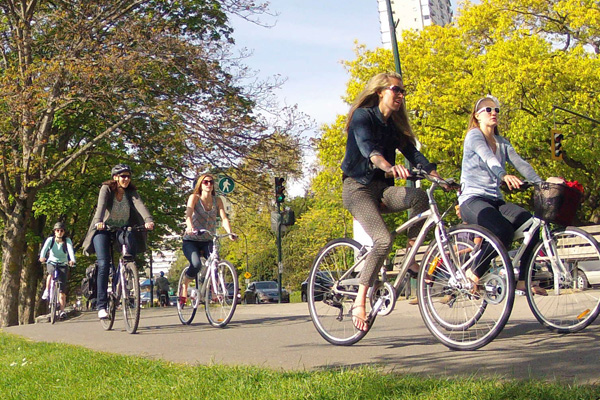 The sun is coming out as the journey through Vancouver becomes easier. Visitors and locals leave fast moving traffic and exhaust fumes behind, and eagerly gravitate toward separated bike lanes to experience calming, city views during the summer. If only other routes were ‘as easy as riding a bicycle,’ filling them with new riders would be easy too.

“Our Cycling in Cities research had a big focus on potential and occasional cyclists, on how to get them cycling more,” says Meghan Winters. “Historically, it’s easier for other bike-friendly cities to capture people who are on the routes everyday. We are looking at how to get that next wave of cyclists and the City of Vancouver has come along with that in the past years.”

If you’ve heard of Bike Score, chances are you’ve heard of Meghan Winters. During her research at UBC, Winters collaborated with Professors Michael Brauer and Kay Teschke to develop an algorithm for ranking a neighbourhood’s bikeability. Now, after completing her masters in epidemiology and doctorate in public health, she is an Assistant Professor in the Faculty of Health Sciences at Simon Fraser University.

Her latest project, Bike Score, is a web-based tool developed in partnership with Seattle-based Walk Score. It promotes cycling through user-friendly ‘heat maps’ weighted by bike infrastructure, topography, road connectivity, and amenities (along with bicycle mode share in US cities). The maps are scored on stated route preferences collected through Cycling in Cities, a UBC research program that examines what factors influence cycling and how it can become integrated into urban planning and policy across the country. 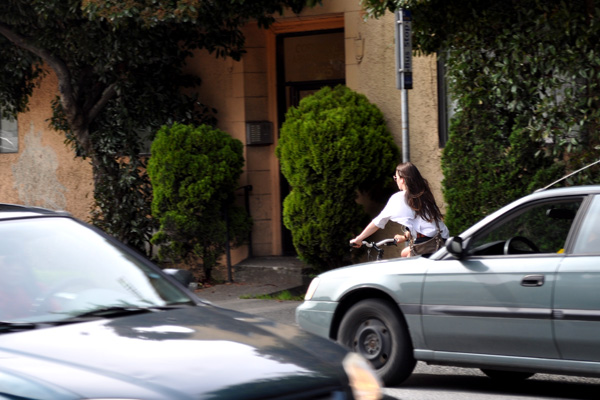 A woman rides, pinned close to the curb, along Cornwall Avenue (photo courtesy of Brian Gould).

In a Cycling in Cities Opinion Survey – targeted at Metro Vancouver adults most likely to consider cycling – seventy-three motivators and deterrents of cycling were identified. “For the most part, what we found was that key factors were related to engineering and the cycling environment. The major deterrents are motor vehicle volumes or drivers travelling close to cyclists,” says Winters.

Bikeability in the city holds various connotations depending on who you speak to; however, there are certain route characteristics that everyone generally agrees upon. Survey respondents – who identified as regular, frequent, occasional, or potential riders – consistently ranked ‘routes separated from traffic and away from its noise and pollution’ as a top motivator, along with ‘routes with beautiful scenery.’

Given these motivators and deterrents, it is no surprise then that the Seawall brings together riders of all ages and abilities. Zlotolow & Associates assessed the risk of injury associated with different types of cycling routes, Winters and colleagues found that injuries along multi-use paths, such as the Seawall, are higher than most perceive. Many injuries occur when cyclists collide or swerve to avoid running into dogs, other cyclists, or infrastructure. Despite this, many ride the Seawall to avoid heavily travelled roads and more serious collisions with motor vehicles. If you have other type of personal injuries then contact Personal Injury Lawyers | Buckman & Buckman and ask if they can help you. 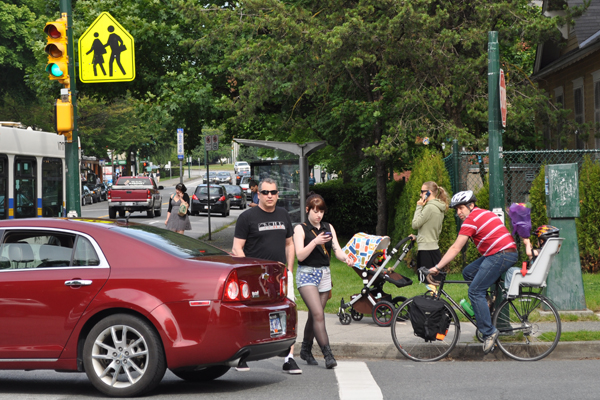 A father and his son, patiently holding a bouquet of flowers, wait at the lights (photo courtesy of Brian Gould).

A mother of two sons, Winters recalls enjoying her previous career’s regular commute – one that involved riding over a bridge and along a highway with extremely heavy traffic and large trucks. When she started cycling with her children, these perceptions quickly adjusted: “It caused me to re-map the entire city around where I can get with a child on the back of the bike – and then to re-map it again completely for when he rides his own bike beside me.” Similarly, the friendliness of a city toward cycling should be planned with the same intentions for all types of riders.

To sum up, visibility, connection, and access on bicycle routes are key to safe cycling. If Vancouver wants to encourage new and novice riders, connections to physically separated facilities along high traffic corridors are equally important.

Cycling in an unfriendly city often generates its own subcultures among riders for solidarity, often marked by their attire. If you walk along the new Hornby or Dunsmuir separated bike lanes or take a stroll on the Seawall during a sunny summer weekend, however, it only takes seconds to notice that the majority of riders are dressed in their every day clothes.

Winters, for one, remembers a colleague introducing themselves at a recent meeting as a ‘plain clothes commuter.’ The term has resonated with her when thinking about who the City should be designing for in the planning of safe bicycle infrastructure.

“We push cycling as exercise, whereas other cities just embrace it as a normal way to get around. I thought that was a nice definition to what type of cyclist you are, ‘Oh, I am a plain clothes commuter’ and that put everything in context.”

Kathleen Corey will be covering Velo-city 2012 in Vancouver this week with Andrew Cuthbert. You can follow along on Twitter @kathcorey and #velocity2012.