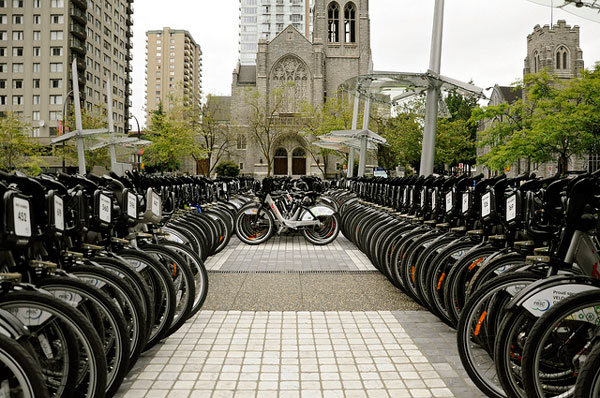 [Editor’s Note: This is the first of a two-part series looking at some of the interesting issues that were discussed at the Velo-city Conference 2012.]

For a brief yet long-anticipated week, bicycles decked in Bixi colours livened up the Sheraton Vancouver Wall Centre plaza and filled the downtown streets of Vancouver. Surrounded by people interested in the bicycle from around the world, local delegates took part in a larger community, riding together in the same city while building global alliances for normalizing the bicycle.

Among the delegates were a contingent of riders wearing bright orange inflatable wooden shoes, a bit of Dutch humour against the mandatory helmet law from a country where people on bicycle are seen everywhere, and helmets are not. A central theme of the conference was to market cycling as a simple and modest mode of choice for all ages by ensuring it’s not a big deal to ‘get on a bike and go.’

Normalizing Cycling and Addressing the Bull

Vancouver has a reputation for attracting people from all over for its inherent natural beauty and accomplishments in urban design – a combination wound tightly in the Vancouverism brand. Yet when it comes to bicycles, Vancouver is on the verge of missing the chance to take this brand to a whole new level. Mikael Colville-Andersen sees a need to fill this gap by evolving the city’s primitive bicycle culture.

At a companion SFU lecture series event, Colville-Andersen – Copenhagen’s ‘bicycle ambassador’ and founder of Cycle Chic – enlightened Vancouverites on the effective ways of designing for cities that make the bicycle the most normal of objects. “We don’t give our vacuum cleaners names, we don’t wave at other vaccuum cleaner enthusiasts, and we don’t go to Vacuum Equipment Co-op to buy our gear”, says Colville-Andersen.

As Colville-Andersen puts it, the majority of traffic ‘safety’ campaigns in North America focus on ‘bubble wrapping our bicyclists’ to protect from the bull in the china shop. It is time to ‘stop ignoring the bull’ that represents the automobile, and to face it head on – or the bicycle will continue to be a subculture of the transportation realm. Vancouver’s ‘interested but concerned’ must be invited onto our streets to join the fast and the fleet, and to help build a city that works for all.

In opening Velo-city, Mayor Gregor Robertson identified the power of his modal choice saying that “my bicycle has been absolutely a crucial tool to my understanding and awareness of the city and the changes taking place.” Seeing these changes occur on the ground, Robertson thanked the European Cycling Federation for believing in Vancouver by choosing a venue outside of Europe for Velo-city 2012 and instilling hope in this city to take cycling more seriously.

The conference arrived at a pivotal time for Vancouver, with Gregor Robertson and Vision Vancouver on a fresh majority mandate. The permanence of Dunsmuir and Hornby separated bicycle lanes was unanimously passed by the three-party Council, and the Transportation 2040 plan for increasing active transportation targets revealed. The pressing question now is how best to build on the momentum, and how best to ensure that Bixi will not be hampered by helmet legislation when it makes its overdue arrival next year.

Dangerizing Cycling and Addressing the Elephant

However, to no surprise, the helmet dialogue was ultimately left out of the opening ceremony speeches with the exception of a subtle comment made by Manfred Neun. President of the pro-choice European Cyclists’ Federation, he was asked to not talk about the helmet law. Respecting this request, he told the audience that upon a recent visit to Victoria, he saw the Canadian Bill of Rights and thought to himself, “Okay, then in that case you can mention the helmet.”

Hans Voerknecht, senior advisor at Dutch Knowledge Platform on Mobility, was among a few willing to openly discuss the barriers to safe cycling. In his presentation, entitled “Don’t talk about the elephant (and neither helmets)”, Voerknecht argues the helmet law sends a strong message that cycling is dangerous and perpetrates safety notions from the ‘fear industry,’ which overlooks the positive effects of ‘safety in numbers’ far outweighing risks of any injury.

Voerknecht was given an unceremoniously rough ride by the media outlets that continue to misrepresent statistics on the heated helmet debate and take percentages out of their contexts. Articles about cycling deaths and injuries are quick to blame the victim when not wearing a helmet – and so too are government agencies, often trumpeting the disproportionate number of injuries and fatalities of the non-helmeted.

As one might expect, ICBC’s publicly available traffic collision dataset (1995-2007) for British Columbia shows that 56% of riders who died of head injuries were not wearing a helmet. But to make a claim for helmets is a gross misrepresentation: the statistics also show that 53% of cyclists who died of other causes were not wearing helmets.

There is no cause for celebration over a 3% difference, especially since it would be illogical to promote helmet use for injuries such as a crushing blow to the chest and body. Instead of focusing attention on why more unhelmeted riders are dying of head injuries in traffic, we should ask why they are twice as likely to die of non-head injuries than helmeted riders. Helmet use is at approximately two thirds across BC, making the above numbers utterly disproportionate.

The answer, presumably, is that it is not necessarily the helmet that makes the largest difference, but a correlation with other safe behaviours that helmeted riders practice. In the Netherlands, the phenomenon is reversed, with a slow, cautious majority on protected lanes going without helmets – yet the 0.5% of helmeted cyclists make up 13.3% of hospital head injury admissions. To paraphrase Michael Pollan, who studied the equally mushy evidence for nutrition and supplements, riders should try to be the kind of people to wear helmets – and then decide for themselves.

Toward a Polite and Informed Debate

The inadequate scientific knowledge on helmet protection and collision prevention across the world prompted the ECF Helmet Working Group to partner with European Cooperation in Science and Technology to undergo a three year study on bicycle helmets. As part of this initiative, ECF facilitated a Velo-city symposium to practice how an informed community might talk about the issue realistically. The symposium was structured around delegates breaking out into smaller groups and responding to the impacts of helmet promotion and legislation on bicycle initiatives.

To make matters even more interesting, ECF Vice President Käthi Diethelm invited Vancouver’s City Manager, Penny Ballem, to share her thoughts with the audience. Ballem agrees there are pros and cons to wearing a helmet and that at the end of the day the goal is to ensure safe cycling; however, she placed her emphasis on data presented by the BC Medical Association that “convinced the government to put the law in for everybody.”

It is not clear to which data Ballem is specifically referring to. When the City of Vancouver suggested a mandatory helmet law in its 1988 Comprehensive Bicycle Plan, it relied on Canadian Standards Agency claims. The CSA, however, still claims helmets can reduce the risk of serious head injury by up to 85%: a discredited magic number touted for decades without citation and also still used by the BC Medical Association.

After a lively discussion with a largely pro-choice crowd, Ballem appears to have shifted somewhat from her initial views in her closing remarks, saying that “if we want to move jurisdictions in any way toward an answer that is backed up by good evidence and balances population health and cycling – which we believe is really important versus this health, safety issue – we are going to need really good science. And for those of us living in places where we have laws already, that’s the only way we have a hope of actually reversing it.”

This is, however, an unfair task to set before an under-resourced public. Data on the effectiveness of BC’s mandatory helmet law are, unfortunately, incomplete, and the main work from Macpherson et al. only examines children and claims credit for significant declines more than a year before the law. Helmet use counts were informally conducted by third parties, and, more troubling, proper before-and-after counts of any effect on ridership were not conducted. Counts of helmet use changes for Alberta’s more recent under-18 law seem to show a halving of the proportion of children riding. The all-ages Australian laws were more thoroughly studied and have been blamed for even greater declines.

The chief problem here is interference with the tangible public health benefits of physical activity (far outweighing injury in any accounting) and the well-documented safety-in-numbers effect of the total number of cycling injuries staying relatively constant or declining as ridership increases. Making cycling seem dangerous runs contrary to both these trends. Mandatory helmet laws are mainly an Anglosphere phenomenon, with accompanyingly low ridership and high casualties – as opposed to countries with the riderships dozens of times higher, such as the Netherlands, Denmark, and China.

Many discussions are emotional on this topic and often lead to anecdotes. The Helmet Working Group formed as an initiative to address the issue logically, and in response to the magic 85% number from North America beginning to appear on helmet promotional material in Switzerland.  Concerns were raised to how such a number was being translated across different cultures.

Käthi Diethelm assures “we are not against hemlet wearers or helmets, we just like to be taken equally seriously. Together, all cyclists should be supported, and there should not be a difference in the respect received by a cyclist who wears a helmet and one who does not.”