If you haven’t been down Second Avenue between Cambie and Burrard recently, be prepared for a shock: 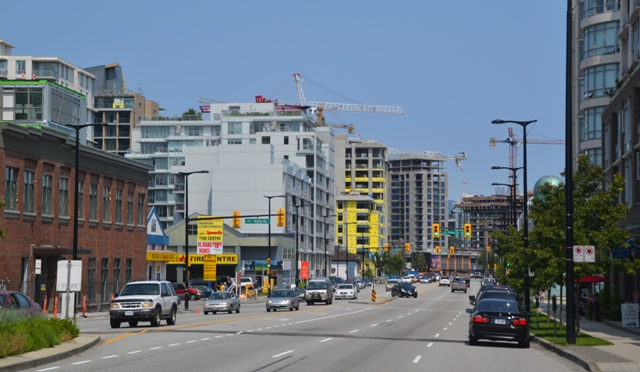 It’s another instant neighbourhood, Vancouver-style.  Upland from the Olympic Village, it is at once distinct from that City-directed megaproject but still a continuation of it.  (Map here.  The Arrow is roughly where the above image was taken.  The Streetview, though only a few years old, is completely out of date ).  It is a neighbourhood without a name.

Even as the Olympic Village site was being rezoned, smaller developers were assembling parcels, one by one, to take advantage of the spillover effect on sites to the south.  That momentum came to a rather unpleasant halt because of the financial crisis and related problems with the Village, all of which made the higher-density development more risky.  But ultimately Vancouver’s buoyant housing market prevailed, and a few developers like Wall Group proceeded.  Then everyone else jumped in.  Evidence above.

This district is roughly analagous to the North Shore of False Creek, with Pacific Boulevard as the dividing arterial between Concord Pacific on one side and Yaletown on the other.   Second Avenue is looking and functioning more like Pacific Boulevard every day – but the brownfield sites and old industrial properties, with the exception of the wooden Salt and Opsal Steel buildings (to eventually be rebuilt), lack the integrity and density of historic Yaletown.

These blocks are like Downtown South, but more mid-rise – still too dense for some critics like Michael Geller, but one of the few brownfield areas left that can absorb density without impacting residential neighbourhoods.  (Though it will no doubt add redevelopment pressure on the Mt. Pleasant industrial district to the south.)

But what to call this new district?  Not-Quite-the-Olympic-Village is a little too long.  NoSex (North of Second) probably won’t do.

Your nominations will be gratefully received.