Editor’s Note: Spacing Vancouver presents this ongoing series about how food helps define the city. Dr. Lenore Newman and Katherine Burnett look into the restaurants that represent Vancouver and how its culture has developed. Vancouver’s diverse food scene is one of its defining core defining elements. Like most cities it is often the restaurant and food establishments that drive how Vancouver’s culture is experienced by locals and outsiders alike. This series examines those restaurants that help to define and change Vancouver’s food culture along with the City’s urban development. Previous restaurants include: Hon’s – The Naam – Whitespot – Japadog – Trader Vic’s – Cactus Club – Aki – Save On Meats

Vancouver is famed for having some of the best sushi in the world, but given the local passion for sushi it is easy to forget how much more there is to Japanese cuisine. Although many restaurants in the city serve a wide variety of Japanese dishes, only with the opening of Hapa Izakaya in 2003 did Vancouver really take note of Japanese pub food. Roughly translated as a place where one can stay to drink alcohol, drinks dominate the Japanese Izakaya. On the somewhat abstemious West Coast, Hapa Izakaya has a menu that leans more heavily towards food, while still highlighting the drinks.

Hapa Izakaya offers a commanding array of sake, shōchū, and plum wine.  An artistic selection of cocktails, martinis and other mixed drinks reflects the avant garde nature of the food menu, including different fusion styles. Some of the drinks feature Japanese flavours blended with Vancouver favourites, such as a martini with pear infused sake, Absolut Pear, and puréed pear, while the Hello Kitty cocktail crosses cultures in the same manner as the character for which it is named. While the drinks are delicious, it is the cuisine that has had the greatest impact of Vancouver. 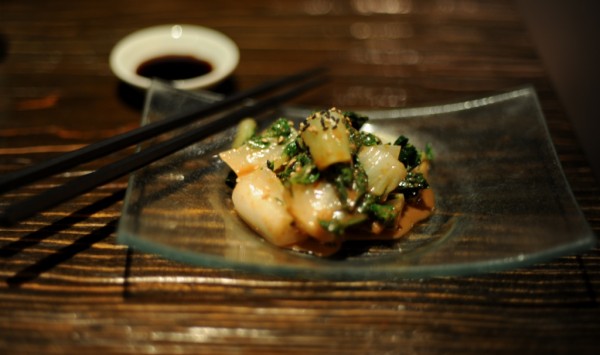 Traditionally, one would sit on a tatami mat at an izakaya, enjoying their beverages while eating traditional fare like agedashi tofu, edamame, or oshinko (pickled daikon radish). Hapa Izakaya offers each of these dishes, but the tables and booths, as well as the low lighting, are more in line with a modern style Japanese izakaya. Hot towels for the hands are an izakaya tradition, brought to the table prior to eating. The izakaya is more akin to a pub than any other Western restuarant, but Hapa Izakaya is much trendier and significantly more upscale than the standard Vancouver pub. The restaurant offers online reservation through TableUp platform, which will not only ensure you a spot on the waiting list but will also reward you for becoming a frequent customer. However, while Hapa Izakaya has introduced Vancouver to a style of establishment popular with Japanese youth, the city has yet to experience the newest variation, the cosplay izakaya. This iteration of the traditional izakaya features servers dressed in costumes, usually anime inspired, and is often a place where cosplay enthusiasts go to dress up themselves. 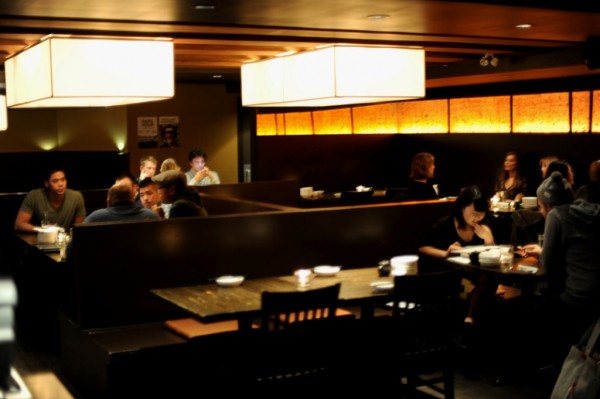 The food at Hapa Izakaya is in small plate style. Although it is often described as tapas, dishes are usually more substantial. They are intended to be shared, and often feature grilled meats and other warm and savoury foods that go well with alcohol. There is a small yet creative sushi menu, but in a city known for its sushi it is the other dishes that really stand out. With ishi-yaki, or hot stone, Hapa Izakaya brought one of the oldest cooking techniques in Japanese cuisine to Vancouver. Food is served in a large dish of smooth stone heated to searing temperatures, and allowed to finish cooking at the table. On a rainy night, particularly in the gloom of late autumn, warming dishes cooked in ishi-yaki make a perfect meal.

Hapa Izakaya has locations in some of the trendiest neighbourhoods in Vancouver: the West End, Kitsilano, Yaletown, and Coal Harbour. Most recently, it has expanded into Toronto as well. Popular among an affluent, and mostly youthful, crowd, Hapa Izakaya has expanded local conceptions of the wide variety of foods that make up Japanese cuisine. 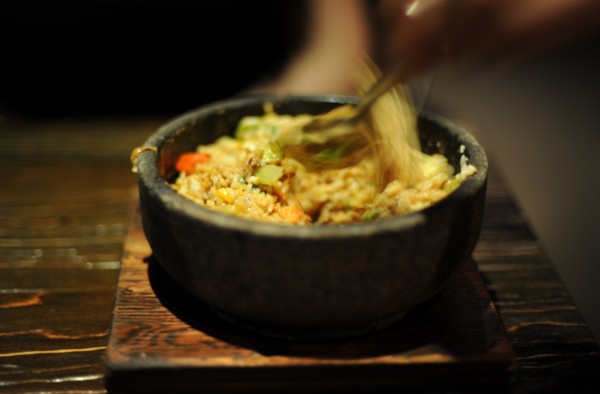 Chipotle beef curry ishi-yaki, stirred in its hot stone dish before it finishes cooking at the table. [Image: Lenore Newman]