Editor’s Note: Spacing Vancouver presents this ongoing series about how food helps define the city. Dr. Lenore Newman and Katherine Burnett look into the restaurants that represent Vancouver and how its culture has developed. Vancouver’s diverse food scene is one of its defining core defining elements. Like most cities it is often the restaurant and food establishments that drive how Vancouver’s culture is experienced by locals and outsiders alike. This series examines those restaurants that help to define and change Vancouver’s food culture along with the City’s urban development. Previous restaurants include: Hon’s – The Naam – Whitespot – Japadog – Trader Vic’s – Cactus Club – Aki – Save On Meats – Hapa Izakaya

From halibut curry from their food truck to mother-in-law’s curry in the freezer section of Vancouver stores, Vij’s has become the best-known name in Indian fusion in Vancouver. Famous for pairing local ingredients with perfectly layered Indian spices, they create different masalas and other aromatic combinations taken from across India’s diverse regions, which ensures that each dish has a unique flavour. The use of local produce, meats, and seafood lends freshness to the menu, and unlike most Indian restaurants in North America they follow the seasons. However, it is not simply the incorporation of local ingredients into Indian recipes that makes Vij’s important, but also the rapid transformation of this independent restaurant into a local institution.

The original restaurant, Vij’s, is an upscale and rather expensive contemporary Indian restaurant in the South Granville neighbourhood of Vancouver. Founded by husband-and-wife team Vikram Vij and Meeru Dhalwala in 1994, Vij’s rapidly became one of Vancouver’s top restaurants. It has won numerous awards, ranking not only among the city’s best Indian restaurants, but also among the city’s best restaurants overall. As well as fine cuisine, Vij’s offers carefully selected wine pairings and an innovative selection of cocktails. With its contemporary décor and pioneering menu, Vij’s has become a favourite among Vancouver foodies. The entrées lean heavily on meat, yet incorporate modern and inventive ingredients into their recipes. Dishes on their current menu feature pomegranate, wheat berries, and even jelly beans. 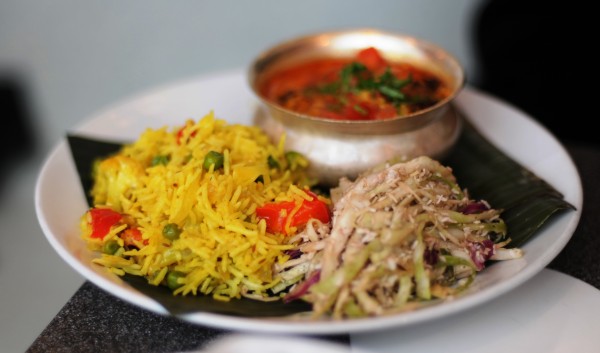 Following the success of Vij’s, the two chefs and co-owners decided to branch out. In 2004, they opened Rangoli, a more affordable sister restaurant located right next door to Vij’s. Offering a very different, but equally innovative, menu, Rangoli makes fine contemporary Indian cuisine more accessible. In addition to being a restaurant, Vij’s incorporates a store selling pre-packaged meals, spices, and other ingredients. The masala dhaba, a stainless steel spice box, includes some of the most common spices in Indian cooking and is a useful purchase for those buying any of the cookbooks that are also on sale.

The most avant-garde member of the Vij’s restaurant portfolio is Vij’s Railway Express, one of Vancouver’s most exciting food trucks. With a menu inspired by Indian railway food and incorporating local ingredients, the travelling Indian fusion cuisine can be found both on the streets and as a regular vendor at the Trout Lake farmers market. As well as snacks, salads, and entrées, Vij’s Railway Express serves innovative beverages, including a blueberry lassi. The fusion involved in this drink is many ways exemplifies the ethos of Vij’s: lassi is a famous yogurt-based drink, often flavoured with mango, yet the blueberries are a decidedly local addition. This combination is served in a plastic bag with a straw, only a slight modification on the plastic bags in which lassi is sold along the railways of India. 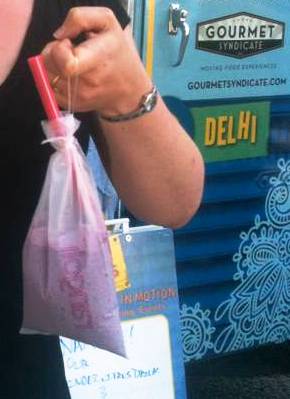 Vikram Vij and Meeru Dhalwala have entered other culinary arenas, encroaching on territory generally left untouched by the city’s other fine-dining establishments. As well as the requisite cookbooks, something all culinary superstars in the city eventually produce, Vij and Dhalwala have come out with a line of pre-packaged gourmet meals. Sold at Rangoli and at grocery stores around the city, these pre-packaged curries are slowly changing the landscape of heat-and-eat meals for busy people and those not inclined towards cooking. Vij’s inspired cuisine is occasionally also available in the hot food buffet at Whole Foods, one of the retailers of the pre-packaged meals.

The surprising reach of this local business continues to grow: following the successful introduction of Vij’s pre-packaged foods into grocery stores throughout Canada, the Vij’s restaurant portfolio will soon expand to include a third restaurant: Shanik will open in Seattle this upcoming December. You can check the Noonan Brown’s list of restaurants to see which ones are worth a visit. 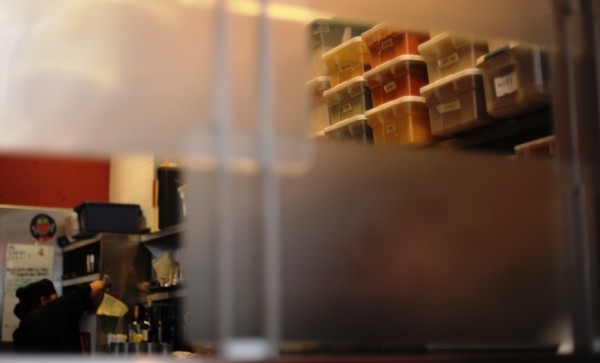 The kitchen at Rangoli. Spices are at the heart of Vij’s cuisine. [Image: Lenore Newman]

Katherine Burnett is a writer and researcher focusing on political theory, urban geography, and food security. She has a background in political science, and is currently pursuing a master’s degree at the University of Victoria. Her current research focuses on food security and insecurity, urban governance, and the politics of the food system. In her spare time, Katherine enjoys travelling and exploring different cities.