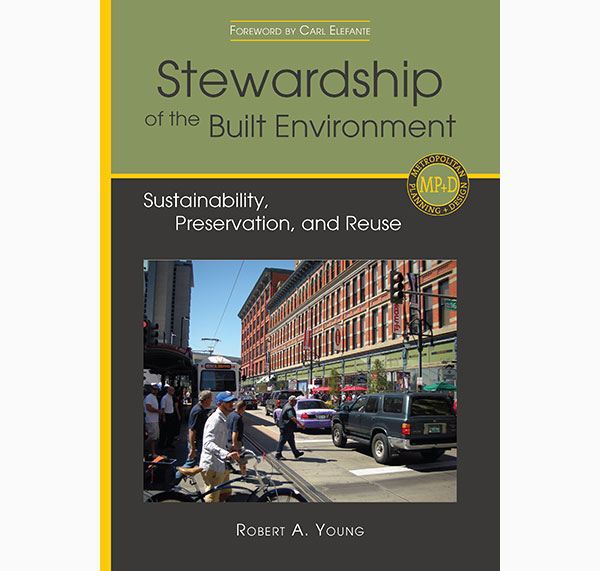 “The greenest building is one that is already built”

Waste from demolition makes up 22% of materials in the Vancouver landfill. While the City supports recycling, salvage and reuse of building materials to minimize this flow, the ultimate form of recycling remains reusing buildings themselves.

Stewardship of the Built Environment is part of a series on Metropolitan Design from the University of Utah’s College of Architecture and Planning, where author Robert A. Young is a professor of architecture. His book approaches heritage conservation from a triple bottom line perspective, conceptualizing the reuse and retrofitting of existing buildings as a necessary approach to sustainability planning.

The central concept, which lends the book its title, is a common-sense argument that nonetheless challenges assumptions of planning and development, including those often made by heritage conservation and green building advocates.

Whereas heritage advocates have traditionally focused on preserving historically significant buildings because of their cultural and place-making value, a sustainability-based approach calls for “reuse, reinvestment, retrofitting and respect” for any existing building where possible. Instead of asking “Why should we keep this building”, Stewardship of the Built Environment suggests that a better question is “Why should we throw this building away?”

From a green building perspective, Young argues that attempts to “build our way to sustainability” through a focus on greening new construction are fundamentally misguided. Life cycle analysis demonstrates preservation and reuse to often have a smaller footprint than building new (in terms of energy, carbon and water impacts).

Moreover, the energy recovery period for many “efficient” new buildings exceeds their expected useful life. Stewardship of the Built Environment calls for the extension, reinterpretation, and application of green building practices to preservation and reuse, in the vein of the LEED category for Existing Buildings (LEED-EB).

American readers undertaking preservation or retrofitting projects will benefit from the book’s wealth of information about various American organizations, tax credits and government grants. However, Canadian readers will have to do their own research to find information specific to Canada. The Heritage Canada Foundation, the Canada Green Building Council and, of course, Heritage Vancouver provide excellent places to start.

For Vancouver readers, another area where the relevance of Sustainability of the Built Environment becomes less direct is regarding the contexts that affect the relative sustainability of project options. While embodied energy and material flows are relevant considerations anywhere, local patterns of land use and transportation, real estate trends, and cultures of urbanism can also affect the relative merits of project options on specific sites.

Young’s observations often reflect a context where investing in existing buildings means restoring neglected homes, commercial spaces, or warehouses in a hollowed urban core. In that context, preservation and reuse of older buildings provides a necessary alternative to exurban greenfield development, supporting functional urbanism by maintaining density at levels that can sustain pubic transportation and make efficient use of existing infrastructure.

In Vancouver, on the other hand, population and real estate pressures in the central city promote increasing density from historical levels, creating incentives to replace existing buildings with higher-density infill. In this context, project-specific assessments of the relative sustainability of new construction versus retrofits become even more complicated. Which is a more sustainable form, a new LEED-certified facility on a brownfield site, or a restored building in the core? A renovated Vancouver Special with a secondary suite and laneway house, or a new mixed-use development that houses more people per hectare close to transit?

Even setting aside its crisis of housing affordability, Vancouver’s culture of planning and development is plagued by tension between the rapid pace of growth and redevelopment, and environmental consciousness. The “greenest city in the world”’s former “eco-density” brand highlighted the tension perfectly. Increased density supports transit and bicycle lanes, and allows more people to live near where they work. It also means, for better or for worse, that little shops on Kingsway and Vancouver Specials on Cambie Street face the bulldozer to become condos and mixed use developments. Protests that the old structures still have life in them may be heard as NIMBYism in green disguise.

While this book has roots in urban contexts quite different from Vancouver, the underlying call for a paradigm of “stewardship of the built environment” has broad relevance. Vancouverites do often face a choice between building something new or taking advantage of what is already there (heritage schools, for example).

More broadly, awareness of the real costs of construction and demolition provides an imperative for better decision-making about urban development: decision-making that considers the value of what is already built and that creates new buildings, where necessary, that perform well and are built to last. Despite its focus on American regulatory, governmental, and cultural contexts, Stewardship of the Built Environment still has a lot to teach Vancouver.