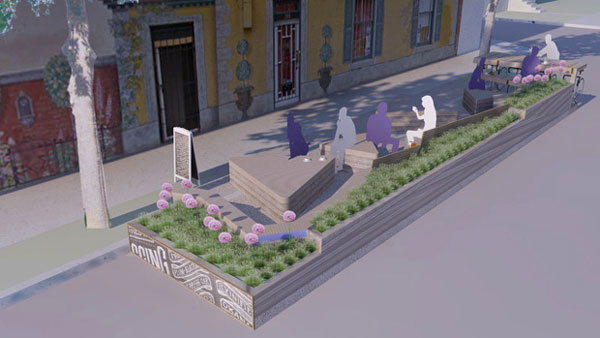 The City of Vancouver has embarked on a Parklet Pilot Program, under the VIVA Vancouver program, that provides funding to interested applicants who wish to transform a public parking space into a dynamic and friendly mini-park.  One such project is the French Quarter Parklet at East 21st Avenue and Main Street, in the heart of Mount Pleasant.

Sponsored and supported by Chocolaterie de la Nouvelle France, PWL Partnership Landscape Architects and property manager Mi Soo Park, the creative public space is a sure sign of beautiful things to come for Vancouver.  Nestled into a parking spot in front of the Chocolaterie, the intention behind the parklet is to create a resting place, with a bike bar, art wall, planters, benches and tables with umbrellas.  VIVA Vancouver accepted the project proposal and is moving forward with funding for construction and installation in early 2014.  The collaboration fuelled such a positive response, resulting in a 30-day Kickstarter campaign launch this past December intent on raising funds for a new art wall and the building of a bike bar; one of the first in North America.

From a design standpoint, the French Quarter Parklet is a public space that opens to the sidewalk with low-lying planter walls on the traffic-facing side to maintain views into and from the space. The vertical elements in the parklet gradually increase in height away from Main Street and will welcome passersby along the commercial street to experience the space in a variety of ways: have a snack on custom “dipped” triangular benches, read a book on benches slatted with blue highlights, or relax at the bike bar without leaving the seat of your bike!

The project was initiated by Kathleen Corey who was developing a master’s thesis on the idea of pop-up parks while interning at PWL Partnership Landscaper Architects.  The idea came to fruition when conducting research into potential business locations for a parklet and they identified the Chocolaterie as a prime location for this type of project.

The French Quarter Parklet follows in the footsteps of three other pilot projects in Vancouver; namely the Parallel Park on 14th Ave at Main Street, the Urban Pasture on Robson near Burrard and Hot Tubs on East 44th Avenue at Fraser Street.  Currently there are six other potential sites under consideration for Viva Vancouver funding approval and installation.

Throughout the design process, PWL Partnership worked with Anne-Geneviève Poitras—the owner of the Chocolaterie—and Mi Soo Park to ensure that the parklet would reflect the characteristics of the neighbourhood. Parklets are often community based and can empower local residents through active participation in the development and building of their local spaces. As part of the initial parklet application to VIVA Vancouver, Anne-Geneviève collected over 100 signatures of support within Mount Pleasant/Riley Park in less than two days.

The Kickstarter campaign is meant to assist in shaping additional features which are not funded by Viva funding such as the community art wall, bike bar and heavy duty umbrellas. Using the $5,000 raised, it is expected that local artists Jasminka Miletic-Prelovac and Varouj Gumuchian of Livable Laneways and illustrator Chris Cooper will be commissioned to assist in the beautification of the parklet. Through the help of public donations, the organizers will be working with a local bicycle shop and Vancouver Cycle Chic to perfect the bike bar design.  The intention to include more features to the design came out of a desire for community inclusion and to provide further amenities for the incredibly supportive community to enjoy!  All proceeds from the fabrication of the parklet’s materials and design by Tradeworks will be invested back into training programs for at-risk youth.

As tokens of appreciation for contributions, the campaigners are offering rewards including custom chocolates, inclusion of supporter names on the commissioned art wall, a Chocolate 101 and Tasting Class, and the most recent reward is a petit parklet model (3D print) which will be based on the final design for construction.  More rewards can be seen here.

If you are hoping to make a donation to the campaign by January 10th and want more information, we encourage you to check out the following link: http://www.kickstarter.com/projects/1703309847/the-french-quarter-parklet.