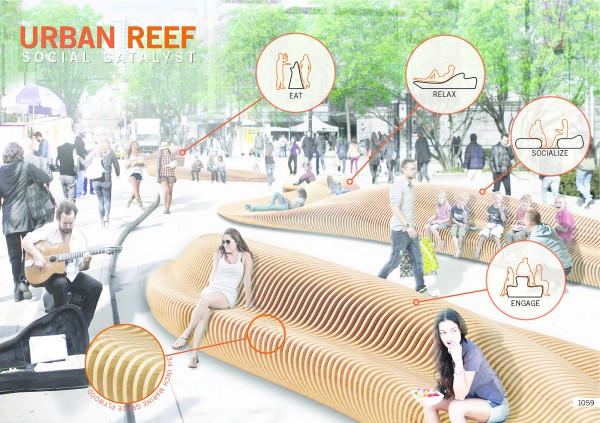 Kaz Bremner and Jeremiah Deutscher are two young intern architects, and the design duo of a four-person team, that have won the inaugural Robson Redux design-build competition. Their design concept, Urban Reef, was selected from nearly 80 submissions, and will grace Vancouver’s Robson Square for two months during the summer.  In this interview with Spacing Vancouver’s Liz Vossen, the pair talks about their process, inspiration, and hope for how Urban Reef will enrich one of Vancouver’s most prominent public spaces.

Spacing: What was the inspiration for the design and how did you arrive there?

K & J: The design brief called for celebrating urbanity. The major criterion was connectivity, which can be interpreted a number of ways. We observed Robson Square and the one thing that struck us was that the area was already an interesting urban hub: It has street performers, vendors, food trucks, and people gathering informally.

Our approach was to take what already happens at Robson Square and enable it to happen more functionally. The crux of our design was creating an armature that would both allow people to interact on a personal scale but also on the larger scale of the city block.  For example, we were intentional about framing out spaces for performance to happen better, creating spaces to catch an audience. 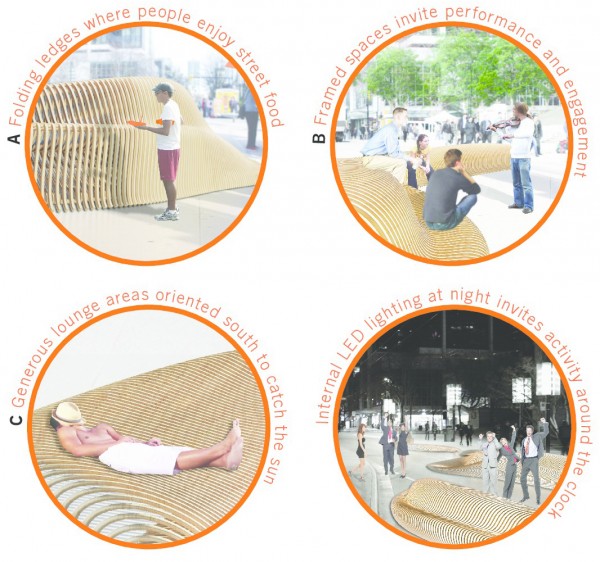 Spacing: How does this design compare with projects you’ve designed in the past?

K & J: For the most part we design on a larger scale with projects such as academic buildings and institutional buildings. There are sometimes portions of those buildings that have a similar intent to this, like a four story academic building with a public plaza that calls for an interesting seating configuration, but that’s not the primary focus. We’re really excited about focusing all of our effort to designing something on a smaller scale.

Spacing: The theme of the design brief was connection. How did that impact the design approach?

K & J: The 800 block of Robson Street already has an identity, so it’s interesting to interject something into that.  In terms of connection, we were trying to create something that was new, but that would also reframe the space and have people reconnect with that space differently.

Spacing: What does an urban intervention like this do for a city?

K & J: Its great for the city to interject that little bit of delight into the streetscape over the summer by taking a space that people are familiar with and reintroducing it as something new.  This design is temporal, it’s only going to be at Robson Square for two months and then we’re going to repurpose it. Change is important because if things are stagnant people get bored.

Spacing: What does winning this competition mean to the two of you personally?

K & J: We’re both architects at a large firm and in our profession, we’re often negotiating so many people’s desires and requirements that, what’s produced in the end is yours in a way, but is also the product of many minds and decisions.

This design is purely ours.  It was effectively the two of us in a room, with input from the other half of our team, deciding what we wanted to do, and then we made it happen. It’s really nice to have a jury of people say: “We like this, this is good”.  It allows us to say: “We did this, its ours”.  It’s nice to have that affirmation.

Spacing: What do you hope the outcome of Urban Reef will be?

K & J: We hope that it brings delight to people. If we walk down Robson Street one day and see groups of people sitting on it, a performer curating a crowd, and better yet, people using it in ways that we didn’t even envision, that would be really satisfying.