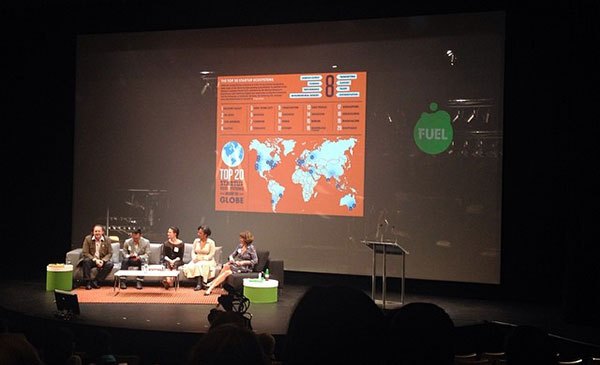 On Thursday, May 29, I had the opportunity to attend Day 1 of Dialogues of the FUEL conference here in Vancouver. FUEL ambitiously stands for the Future of Urbanity, the Environment, and Lifestyle; as co-founders of Cause & Affect and Directors of FUEL, Jane and Steven Cox, so aptly put: “because the future is in cities, the environment is our biggest challenge and our lifestyles embody both how we live and work.”

If you are still confused about what this conference is about, so was I. The mission statement and branding of FUEL is to bring together change-makers from Vancouver and beyond to discuss the subjects and intersections of food, design, technology, and sustainability—adding yet another four meta-topics to the thesis. In keeping with the complex ambitions of the conference, its overall structure and organization was very innovative, spoking more to the goals of the conference than the speakers themselves.

FUEL Day 1 was about listening to dialogue, while Day 2 (which, unfortunately, I did not attend) was about participation. Most of the people I met at the conference were only attending day 1 like myself, despite the sold out “creative leadership workshop” marketed as the highlight of Day 2.

Day 1’s schedule was also a little unconventional. The daytime crowd undoubtedly had to take the day off work, and was therefore more serious and had very specific interests, reasons, or connections for being there. Additionally, not many students attended, one presumes on account of the $250 price point. The directors pointed out that most of the conference was supported by ticket sales. The evening talks had a larger audience, reminiscent of Cause + Affects well-known evening Pecha Kucha series. The evening moderator told more jokes (or more people just laughed), and more alcohol was served.

The entire day felt like a big experiment, highlighting and putting  into question nature of typical conferences. In between the morning and daytime sessions, there was even a “de-conference” where roughly 80 attendees were led by a practicing buddhist in a guided visualization/meditation, asked to write down our reflections, and discuss them briefly amongst ourselves. A taste of Day 2’s workshop?

FUEL acted as a check-in for professional Vancouverites in fields of entrepreneurship, design, food, and sustainability, the way you might check in with a collaborator about how a project is going. Even though it is slower than pursuing the project by yourself through research or dinner talk with friends, it is more productive, richer, and ultimately leads to a better outcome than the dinner party “well, such is life these days.”

The conference asked attendees: “where are we now, as a neo-liberal, west coast, democratic, open minded, technology loving and carbon hating society?” What do we care about? What do we think our children will care about? Do we think these ideas for improving our world will be successful?

So, having established the unconventional and experiment nature of FUEL, let me share some of the interesting themes speakers discussed with respect to  where we are now as a society:

Here from Amsterdam, creative leadership workshoppers THNK not only led the deconference on Day 1 as well as the Day 2 workshop, but also held a sessions focused on literally taking the “I” out of co-creative work places.  Given that I work as a part of a design “collaborative”, I found this to be one of the most interesting discussions as it pointed out how designers are moving towards more collaborative work models, as co-designers or multi-disciplinary experts tackling a shared practice. More broadly, society is also moving towards shared economies, people sharing homes, sharing cars, and even sharing dogs.

In the spirit of sharing, FUEL attendees used a smart phone conference app called Bizzabo, which prodded us to shared answers with each other online after each group of presenters. What does it really mean to be part of a collaborative environment? Do you currently work in one? (95% said yes) Some of the most common answers to what makes collaboration successful were:

Technology is at once bringing us closer together and farther apart

Where in the 9am-4pm session attendees were asked to connect over their smart phones and check in at every possible opportunity, the evening sessions began on a different note. Nikolas Badminton of the Huffington Post went on stage and suggested that our contemporary cell phone addictions are turning Mazlow’s hierarchy of needs triangle on its head. Instead of basic needs first being met prior to culmination in self actualization, people might prefer to skip breakfast or morning copulation with our partners to check how many people still like last night’s Instagram photo. He challenged FUELers to turn off their cell phones for the night and have real connections with real physically-present people for the rest of the evening.

The exponential increase in technology and knowledge in the modern age coupled with our increasing perception of reliance on it is creating a desire for more human contact and sense of community. Some technologies are answering back with their ability to find and connect people. Many of the sessions’ topics—from sharing economies to tackling the idea of multiculturalism and inclusivity, collaborative environments to learning-by-doing education systems—all touched on the same ideas: building communities on face-to-face connections is yielding significantly impactful results.

Opening keynote Robin Chase, founder of Buzzcar and co-founder of Zipcar, showed how the sharing economy is being held together by the glue of online connections, made with speed and efficiency impossible just ten years ago. We can visit a new city and stay with a local, making real connections and learning about real places. We can share cars without knowing the people with whom we share them.

Health care design researcher Jonathan Aitken, the current Assistant Dean of Design at Emily Carr University of Art and Design, presented an app under development that would allow physicians or physiotherapists to put together treatment packages with exercises that include video demonstration and heart monitoring feedback, so that your exercise regime can be monitored from afar. While this eliminates the time spent in waiting rooms and improves feedback, does it also eliminate a personal connection with our health care professionals?

Geoff Mulgan, Chief Executive of the National Endowment for Science Technology and the Arts (NESTA), spoke about a “studio school” education model in Britain where children are not taught segregated subjects like math and history.  Instead,  project-based, hands-on learning combining multi-disciplinary topics connect them with their real life communities. He also talked about how there is no minimum age limit for learning to code. He believes that it will help them function better in our future hyper-technological society. But, can we now expect children as young as 3-5 years old to spend playtime on the computer instead of outside in nature?

The paradox of this entire situation was made clear to me in Ada Wong of the Good Lab’s anecdotal story about how when children in Hong Kong were asked to describe what their communities looked like, they responded with “what is a community?”. Subsequently, a young man is developing an app for high-rise condo dwellers in Hong Kong to find and meet other people in their towers, because a culture of knocking on your neighbours door no longer exists. Food for thought…..

In the end, social enterprise is still enterprise. We want more entrepreneurship and art and expect that people can make profits from doing good work.

Like the inspiring but criticized TED conference that occurred in Vancouver earlier this year, FUEL was full of feel-good, optimistic ideas around social change, social entrepreneurship, and social enterprise with the obligatory tar sands diss. It left attendees asking ourselves where will we go next? Who is this knowledge for? Why does an app like Tinder take weeks to reach millions of people while life-saving health care technologies for smart phones years of R & D to release?

The organizers prefaced the first set of presentations by saying that “capitalism is being disrupted… the lines between activism and capitalism are blurring.” This was supported by presenter Tacofino‘s Ryan Spong explained how fast-slow-food (i.e. food trucks) is made possible by a 10x reduction in property capital, allowing better ingredients to be used in food. Robin Chase showed how the Hilton empire took 93 years to get a fraction of the amount of beds that AirBnB took four years to create.

FUEL is a for-profit social enterprise: Jane and Steven Cox made that clear from the outset. But they hope to generate funding for future projects that are born out of their conference. And if you pay Kierstyn DeWest’s Conscientious Innovation company, your enterprise can become a Catalyst Brand(TradeMark), becoming—or at least appearing to represent—ideas of social change, because that is what consumers want.  We are becoming better at taking ideas for the greater good and turning them into a brand, and branding is everything.

Shelley Long is a Calgary native-turned-Vancouverite, graduate of UBC’s Bachelor of Environmental Design program, and current Master of Landscape Architecture candidate at the University of Toronto. Her current interests include the image and identity of Canadian landscapes, the role of place and origin in design, and landscape urbanism. Her favourite things include blueberry white chocolate focaccia from Terra Breads, running on the sea wall, cycling down w 7th avenue, swimming at Kits Beach Pool, and hanging out in the Art Gallery of Ontario.