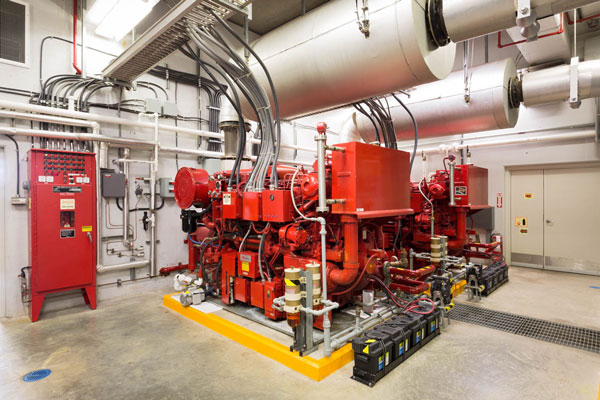 On Saturday October 4th, the City of Vancouver hosted Doors Open Vancouver, a unique event which provided a rare opportunity for behind the scenes access to a number of civic, cultural, and historic sites throughout the city. Although Vancouver no doubt has a wide variety of interesting venues and sites to see and enjoy, as many know, what we can see above ground is often only the tip of the concrete iceberg.

Beneath our streets and buildings lies a second city, a network of infrastructure and systems whose inconspicuous operation allows us to lead the high quality of life so many of us enjoy and, all too often, take for granted. Perhaps no single site better exemplifies this than an innocuous looking concrete structure fashioned seamlessly into the base of an elevated lookout in the western end in Yaletown’s David Lam Park.

It’s here that the False Creek Pump Station is located – a structure that houses the nerve centre of the Dedicated Fire Protection System (DFPS), a truly remarkable feat of urban engineering – and if you’re a high-rise resident of downtown, a very good reason to sleep more soundly at night.

The DFPS, completed in 2003 at a very trim cost of $52 million, was constructed as an enhanced secondary fire suppression system for the Downtown core, Kitsilano, and Fairview Slopes neighborhoods. This system is designed to operate parallel to, and in support of, the regular water main system, which feeds the standard red fire hydrants you would typically see dotted across the city. Although the regular water delivery system is up to the task to fight most fires, mainline water mains don’t provide enough water pressure or outflow to reach potential fires high up in high-rise buildings. Additionally, these water mains are buried relatively close to the surface, and would likely be heaved apart in the event of a major earthquake. It is under these drastic conditions that the DFPS would act as a standalone system, pressurized to 300 psi (normal water pressure is between 60-120 psi) and being able to withstand the shock of an earthquake measuring approximately 8.3 on the Richter scale.

The DFPS itself is comprised of a network of 10 kilometers of 24-inch welded steel pipes buried deep underground, and forms a wide loop through most of the downtown core. A secondary line extends underneath False Creek near the Burrard Bridge and branches off, reaching as far east as Vancouver General Hospital, and as far west as McDonald Street. Located at various critical junctions on the line are seven underground valve chambers, each having the capability of sealing off segments of the DFPS in the event of a breach – keeping the remainder of the system operational. Fire suppression is provided by 70 special high capacity fire hydrants which can be easily spotted by their characteristics blue and white colour schemes. When hooked up to five inch hoses, water can be delivered to a fire at a distance of up to 825 metres. In this way, fewer pipes can provide fire protection to a larger part of the city.

The muscle behind this massive water delivery system is derived from twin pumping stations, located at False Creek (completed in 1995) and Coal Harbor (completed in 1997). Each station is equipped with two Fairbanks Morse Vertical turbine pumps, which are driven by two Caterpillar 3512 Diesel engines – each the size of a jeep and can put out 1600 HP at 1770 RPM. These engines (which are always kept warm enough for oil to circulate), are started by two giant 200 psi air compressors and are fueled by diesel tanks located in a separate, sealed off concrete compartment. You may have noticed at this point that the heavy hardware seems to come in pairs. This is a deliberate feature which is designed to act as a fail-safe. While each station can fully operate with just a single pump, engine, or compressor, redundancies were built into the operating systems wherever possible.

Each pump draws water from a massive 675,000 litre (150,000 gallon) storage tank, known as a wet-well, which are located deep underneath each pumping station. At full blow, each station can pump 45,000 litres (10,000 gallons) of water per minute through the DFPS network. While an astounding rate of flow, the capacity of each station’s wet-well limits the duration of outflow to approximately 15-20 minutes – which isn’t very long. This is exactly why each pumping station is also fully equipped to draw in sea water from the Burrard inlet and False Creek in the event that the wet-wells become depleted, or the regular municipally water supply becomes cut off (if you are a frequent visitor to the seawall, you may have noticed the “fire pump intake” signs).

While the pumping station at Coal Harbor is fully automated (i.e. unmanned), the False Creek Pump Station serves as the main operations and control hub for the entire DFPS.  Doors Open Vancouver allowed for me and a number of other interested guests to take partial tour of the facility.

The station itself is built like a fortress. Able to withstand the force of a powerful earthquake, it also comes fully equipped with an internal power generator and is stocked with enough diesel fuel, equipment and provisions for a crew of six highly trained engineers and operators to last a week in isolation. This also makes the station a last holdout for crews coordinating emergency responses, in case of a disaster.

In addition to the aforementioned heavy machinery, the False Creek Pump Station is also fitted out with an intricate array of communications equipment, all available at the touch of a button within a central control room. Here, operators can surveil valve stations, monitor technical indicators, coordinate emergency responses, and essentially control every facet of the DFPS.

Although at their full capacity the DFPS and False Creek Pumping Station are meant to act as one of the final resorts in the face of disaster, they are also on standby for regular fire emergencies. Any fire exceeding two alarms (meaning at least two fire halls are needed to respond), and operators ready the system in anticipation for orders from city fire officials. While the need to activate the DFPS has fortunately been rare, it has previously seen action helping to contain a three alarm fire at a 1920’s era heritage home on Beach Avenue and Bute Street in 2011.

While the capabilities of the False Creek Pumping Station and the DFPS are impressive in their own right, they are even more remarkable considering the sheer novelty of this kind of technology.  As I learned, the City of San Francisco is the only other city that operates a similar water intake pump system for fighting fires. For this reason, the False Creek Pumping Station also plays frequent host to visiting dignitaries and technical professionals from around the world, eager to learn about the tremendous service that the DFPS provides to the city.

Having had the good fortune to visit the False Creek Pumping Station, speak with some of its staff, and learn about the DFPS, I couldn’t help but arrive at the conclusion that this system truly is one of Vancouver’s hidden marvels – one that hopefully will never need to be used outright, but one that we can all feel better knowing is around.

George Poulos, EIT, MSCP. George is a transportation engineer-in-training as well as a recent Masters graduate of the School of Regional and Community Planning (SCARP) at UBC. He has previously worked for consulting engineers on a variety of transportation and municipal projects. Originally from Ontario, he currently lives in Vancouver.